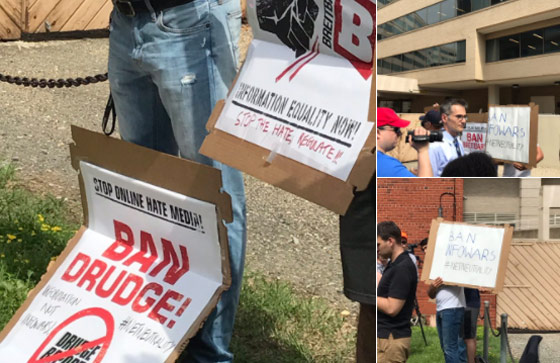 This report was originally published by Kit Daniels at Infowars.com

Net Neutrality activists held signs declaring “Ban Drudge” and “Ban Infowars” while calling for the regulation of on-line speech outside the Federal Communications Commission on Thursday.

“Information equality now!” read one of the signs. “Stop the hate, regulate!!!”

The protestors were taking part in a rally spearheaded by Sen. Ed Markey (D-Mass.) in protest of the planned vote to roll back the FCC’s regulatory takeover of the Internet by reclassifying Internet Service Providers as “common carriers” under Title II regulations developed in 1934.

They are demanding that FCC Chairman Ajit Pai keep Obama-era FCC regulations in place, but as we reported in 2015, the FCC had cherry picked existing laws for cable, radio and broadband to create a patchwork of “authority” to regulate the Internet and set the precedent to control on-line speech.

Some of the existing laws were written decades apart and independently of each other, but that didn’t stop the FCC.

Additionally, several members of the FCC under President Obama were members of a leftist organization called Free Press which advocated draconian restrictions placed on the Internet.

For example, the FCC’s former chief diversity officer, Mark Lloyd, co-authored a 2007 report calling for the regulation of political talk radio by limiting free speech on AM and FM stations under the guise of “balanced radio programming,” i.e. a fairness doctrine.

“While progressive talk is making inroads on commercial stations, conservative talk continues to be pushed out over the airwaves in greater multiples of hours than progressive talk is broadcast,” the report stated, oversimplifying politics into a false left/right paradigm. “These empirical findings may not be surprising given general impressions about the format, but they are stark and raise serious questions about whether the companies licensed to broadcast over the public airwaves are serving the listening needs of all Americans.”