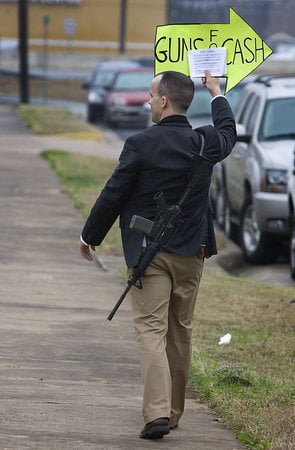 Leave it to enterprising Americans to always find a loophole in the midst of ever-expanding government regulation.

While thousands of Seattle residents lined up for hours to trade their handguns, rifles and family heirlooms away in exchange for up to $200 in gift cards as part of the city’s latest gun buyback program, gun collectors who have seen prices for assault rifles and firearms accessories almost triple since November took advantage of a huge opportunity.

Police stood in awe as gun enthusiasts and collectors waved wads of cash for the guns being held by those standing in line for the buyback program.

Some even had “cash for guns” signs prominently displayed.

People that had arrived to trade in their weapons for $100 or $200 BuyBack gift cards($100 for handguns, shotguns and rifles, and $200 for assault weapons) soon realized that gun collectors were there and paying top dollar for collectible firearms. So, as the line for the chump cards got longer and longer people began to jump ship and head over to the dealers.

John Diaz, Seattles Police Chief,  wasn’t pleased with the turn of events stating “I’d prefer they wouldn’t sell them,” but admitted it’s perfectly legal for private individuals to buy and sell guns, FOR NOW. Mayor Mike McGinn said at a news conference the private transactions are a loophole that needs to be closed. “There’s no background checks, and some (guns) could be exchanged on the streets that shouldn’t be in circulation.”

But Schuyler Taylor, a previous gun retailer attending the event in hopes of buying weapons, asked “Why not offer them cash versus a gift card? I’m still taking the guns off the streets; they’re just going in my safe.”

DCexposed via What Really Happened?, Before It’s News, Daily Paul

Pictures from the Gun buyback turned gun show in Seattle: 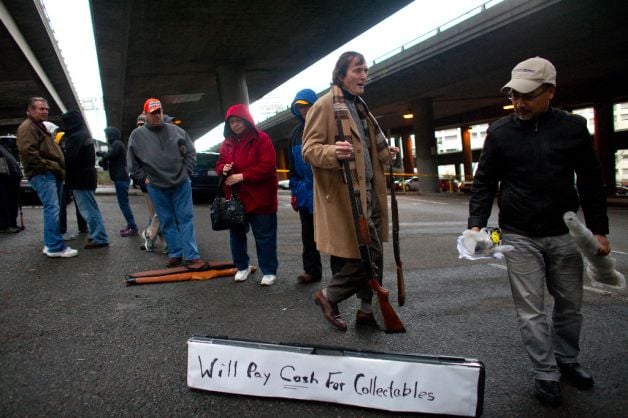 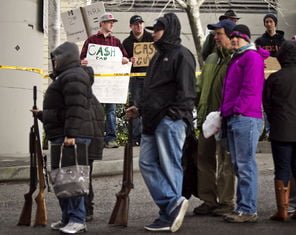 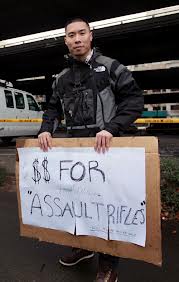 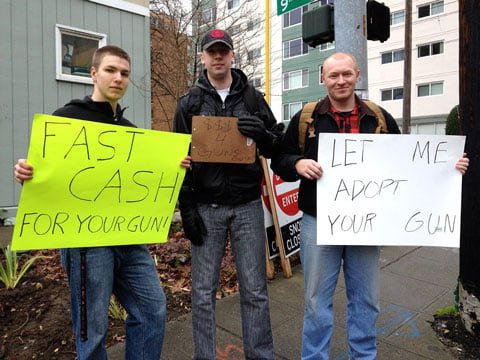 As lawmakers and gun control advocates further press the issue of disarmament, law abiding American gun owners who see those very same politicians refusing to disarm their own armed security details and exempting themselves from gun control legislation they mandate upon the rest of us, are starting to push back.

New York gun owners are organizing and resisting the new registration requirement recently forced down their throats by the State legislature.

Calls for defiance are taking hold across the entire spectrum of gun owners, with even elected law enforcement officials now rejecting any forced Federal or State mandates that they deem unconstitutional.

In Milwaukee, and to the fury of Mayor Tom Barrett, Sheriff David A. Clarke Jr. launched a media ad campaign promoting a new partnership with residents of his city :

I’m Sheriff David Clarke and I want to talk to you about something personal: your safety. It’s no longer a spectator sport; I need you in the game.

But are you ready?

With officers laid off and furloughed, simply calling 911 and waiting is no longer your best option. You can beg for mercy from a violent criminal, hide under the bed, or you can fight back. But are you prepared? Consider taking a certified safety course in handling a firearm so you can defend yourself until we get there.

You have a duty to protect yourself and your family.

Law abiding gun owners in America minded their own business and simply asked to be left alone. Now, because of the actions of criminals and psychopaths who will not disarm despite any legislative action, we have government officials on all levels and even the private sector attempting to limit how we can protect ourselves and our families from the very people who are out there committing the violence.

Sides are being taken.

And while there may be an effort to weaken certain Constitutional protections and even repeal them altogether, there are tens of millions of Americans uniting behind a single cause. They come from all walks of life, different political ideologies, and many are members of our armed forces and local police departments.

Every attempt that gun grabbers have made in an effort to disarm Americans and limit our access to firearms has been vehemently rejected, and in the case of the Seattle impromptu gun show, used for the benefit of expanding gun ownership.

If certain government officials really believed in our right to bear arms and wanted to keep guns in the hands of responsible, law abiding people, they wouldn’t be trying to take them away from us. Instead, they’d be giving us a tax break for gun safes.