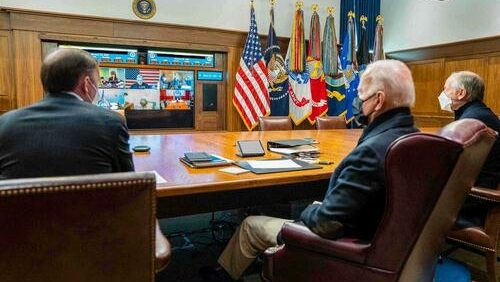 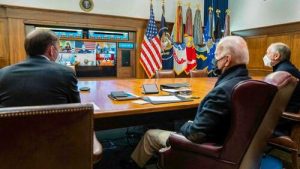 In the White House’s latest threat – or rather an option which it keeps repeating – Joe Biden says he could sanction Vladimir Putin personally if Russia moves on Ukraine, something that within the last 48 hours even Ukraine officials have begun to downplay as they’ve tried to calm that state of panic among their population.

The Russian leader was quick to repeat that this would be tantamount to breaking off all relations, and further that Moscow wouldn’t hesitate to respond to any “aggressive” action by the US or its allies. The BBC notes that “Officially, Putin only owns an apartment and three cars” – suggesting that it would be practically difficult for Washington to sanction all the wealth the Russian president doesn’t officially own.

The report further notes that this hot button issue was again raised in response to a Biden press Q&A on Tuesday:

Taking questions from reporters on Tuesday, Mr Biden replied “yes” when asked whether he could see himself imposing sanctions on the Russian president personally in the event of an invasion.

Such a move across Ukraine’s border would mean “enormous consequences worldwide” and could amount to “the largest invasion since World War Two”, he said.

But as for whether such an invasion will actually come any time soon (much less whether it’s “imminent” as Jen Psaki has been repeating), the Pentagon itself is now downplaying the scenario.

Pentagon spokesman John Kirby early this week said in a briefing that “obviously we’re mindful of things that the Russians could do that would potentially give us indications of some sort of imminent incursion.” He emphasized though, “we’re not there yet, but we are watching for those indicators very, very closely.” Kirby added that “It’s very clear that the Russians have no intention right now of de-escalating.”

And there was also this exchange on Monday:

Q: And we’re telling diplomats’ families to leave and Americans to leave, so is this moving on from a diplomatic effort to preparing for an invasion?

MR. KIRBY:  NO, not at all.  Again, what we’re — what we’re telling these units to do is to be ready to go on a shorter timeline than what they were before.

On Wednesday, so-called Normandy format talks kicked off at the Elysee Palace in Paris, involving representatives from Germany, France, Ukraine, and Russia. The representative for Ukrainian President Volodymyr Zelensky says Kiev is optimistic…

Arrived in Paris with ?? delegation to meet with Normandy4 leaders' political advisers. We have finally managed to unlock the format – and it's a strong signal of readiness for a peaceful settlement. Hope for a constructive dialogue in the ?? interests.

As we noted Tuesday, the situation appears to be de-escalating and the West is backing off the ‘military option’ for now, after Germany, France, and other NATO allies made it clear they are breaking from the more confrontational and bellicose tone of the US and UK. On the question of sanctioning Putin personally, the UK has also said it has “not ruled anything out”.