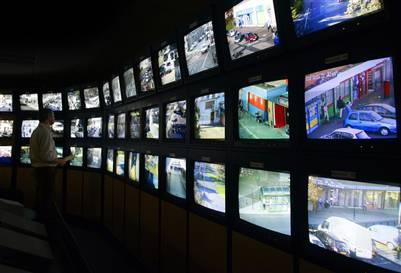 Chicago is launching a creepy new campaign to blanket the mega-city in more surveillance through its Array of Things, creating a network of (at least) 500 sensors devices that will be shared in a growing Big Data cloud.

As The Chicago Tribune reports:.

The first of a network of data-collecting sensors that could one day blanket Chicago are now live.

The city installed two nodes containing computers and sensors including low-resolution cameras as well as air quality sensors last week. They went up on traffic light poles at Damen and Archer avenues in the McKinley Park neighborhood on the Southwest Side and Damen and Cermak Road in the Heart of Chicago on the Lower West Side. The installation marks the launch of the Array of Things project, which was conceived in 2012 and originally slated to start in mid-2014.

The project is a collaboration between the University of Chicago, Argonne National Laboratory and the School of the Art Institute of Chicago. AT&T is the internet provider for the project, which is backed by a $3.1 million grant from the National Science Foundation.

The selling point is that many of the sensors will collect data about air quality and monitor traffic patterns for public safety.

But in reality, Chicago is a failing, gang-infested and corrupt city that epitomizes the collapse of America. These sensors, and the thousands of other surveillance cameras and input devices are erecting an electronic concentration camp inside the nation’s most chaotic and unruly areas.

Simply put, Chicago will quickly become one of the United States’ foremost police states, though they will be in good company with Seattle as a partner city, and most of the rest of the metros across the country soon to follow.

Be warned, things get darker from here.

The data will be publicly ‘released’ and also shared with city officials, “policy makers”, scientists/experts, law enforcement and (surely) government agencies, all of whom will process and analyze the data.

By making data public, it makes everyone a participant in their own enslavement, making the ultimate ‘transparency’ the data invasion of your life.

This article could go on for a while with in depth examples of how quickly the total surveillance society is taking over, and why we shouldn’t take it lying down.

Suffice to say, wise money will be diversified into cash, assets and raw survival supplies. There are 1001 ways in which your wealth is being looted and, your activities monitored, and your energy is being drained on the grid.

But soon, that grid will be almost impossible to escape from. Ever wanted to live life as a number?

Here’s what the CIA and NSA have been drooling over, while they watch the world opt into data rape:

Petraeus: “We’ll Spy On You Through Your Dishwasher”

The new age has dawned. Tagged, traced, tracked. Nearly every member in society is leaving a huge web of footprints and electronic prints everywhere they go, which computers can automatically flag for eccentric behavior and closer inspection. Many have opted in for greater data sharing with heartbeat monitors, step counters and other biometric data tools.

Even those who go to great lengths to pay cash, stay out of debt and off the radar and in the physical world stand to leave behind traces, and ping in the system of the Internet of Things (IoT) where all devices become smart appliances sending 2-way communication.

CIA Director David Petraeus made headlines with a speech given at the summit for In-Q-Tel, the CIA’s venture capital firm. In this talk, Petraeus discussed the emerging “internet of things” and the implications it will have for increased levels of surveillance. Petraeus explained that, because of the rise of gadgets which are connected and controlled by apps, intelligence agencies will no longer need to place spy devices inside your home – you will do it for them.

[…] the fact is virtually every piece of electronic equipment (including appliances) can be controlled via apps and Internet-based systems. It is for this reason that Petraeus stated that the CIA will be able to read these devices via the Internet and even radio waves outside of the home. Petraeus further stated:

‘Transformational’ is an overused word, but I do believe it properly applies to these technologies.

Particularly to their effect on clandestine tradecraft. Items of interest will be located, identified, monitored, and remotely controlled through technologies such as radio-frequency identification, sensor networks, tiny embedded servers, and energy harvesters – all connected to the next-generation internet using abundant, low-cost, and high-power computing.

It seems that only Phillip K. Dick could foresee how far this system is going.

Still have nothing to hide?

‘We Live In Public’

If you want to know what it is like to live in a world where all your intimate data is shared, then check out the documentary “We Live in Public,” about the rise and fall of an Internet entrepreneur who went Truman Show and put everything on the web, including an experimentally surveillance society housed in an underground bunker.

His intent was to reveal how we are all going to live in the near future, where this technology is taking us.

“One day we’re all going to wake up and realize that we’re just servants. It’s captured us.”

“We built a bunker and showed people the future”

Clamp Down on Cash Is the Ultimate Surveillance State: “Citizens Shouldn’t Be Under General Suspicion”