Army Officer Wants You Disarmed: “We Will Pry Your Gun from Your Cold, Dead Fingers” 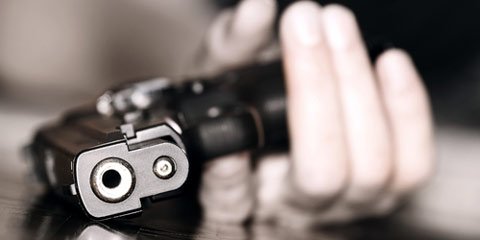 Within the upper echelons of our military there still remain men and women who are committed to the fundamental laws of the land. But assuming that all members of our military will be there to support the Constitution of the United States when our nation needs them most would be a mistake.

Understand this: There are those within their ranks who would turn on their oaths and forcibly seize the very rights our Founders fought so hard to preserve without giving it a second thought.

The following opinion piece, penned by Lt. Col. Robert Bateman, shows in stark detail exactly what we’re dealing with and argues in no uncertain terms that the American public must be disarmed in order for the United States to survive.

The ideas proposed by Lt. Col. Bateman in It’s Time to Talk About Guns and the Supreme Court are nothing short of shocking.

This is coming from an active military commander, and though not officially sanctioned by the administration, his work is obviously a propaganda piece designed to give the gun grabber initiative direct support from military leadership.

Guns are tools. I use these tools in my job. But like all tools one must be trained and educated in their use. Weapons are there for the “well regulated militia.” Their use, therefore, must be in defense of the nation. Shooting and killing somebody because they were not “upset enough” over the loss of a college football team should not be possible in our great nation. Which is why I am adding the following “Gun Plank” to the Bateman-Pierce platform. Here are some suggestions:

1. The only guns permitted will be the following:

2. We will pry your gun from your cold, dead, fingers. That is because I am willing to wait until you die, hopefully of natural causes. Guns, except for the three approved categories, cannot be inherited. When you die your weapons must be turned into the local police department, which will then destroy them. (Weapons of historical significance will be de-milled, but may be preserved.)

3. Police departments are no longer allowed to sell or auction weapons used in crimes after the cases have been closed. (That will piss off some cops, since they really need this money. But you know what they need more? Less violence and death. By continuing the process of weapon recirculation, they are only making their jobs — or the jobs of some other cops — harder.)

4. We will submit a new tax on ammunition. In the first two years it will be 400 percent of the current retail cost of that type of ammunition. (Exemptions for the ammo used by the approved weapons.) Thereafter it will increase by 20 percent per year.

5. We will initiate a nationwide “buy-back” program, effective immediately, with the payouts coming from the DoD budget. This buy-back program will start purchasing weapons at 200 percent of their face value the first year, 150 percent the second year, 100 percent the third year. Thereafter there will be a 10 year pause, at which point the guns can be sold to the government at 10 percent of their value for the next 50 years.

6. The major gun manufactures of the United States, less those who create weapons for the federal government and the armed forces, will be bought out by the United States of America, for our own damned good.

You won’t see the establishment media publishing arguments from top military leaders in support of the Second Amendment. Sadly, however, those who would take away our right to defend ourselves have been given a limitless platform to push their agenda to the masses.

Hundreds of thousands of services members, both active and retired, have put their lives on the line to uphold those rights which have made our nation great. There’s no doubt that they will do so again when the need arises.

But on the flip side of that coin are potentially hundreds of thousands of others who have no qualms about “just following orders.”

A report earlier this year from well connected philanthropist Dr. Jim Garrow claims that there is a new litmus test for military leadership:

I have just been informed by a former senior military leader that Obama is using a new “litmus test” in determining who will stay and who must go in his military leaders. Get ready to explode folks.

“The new litmus test of leadership in the military is if they will fire on US citizens or not”.

Those who will not are being removed.