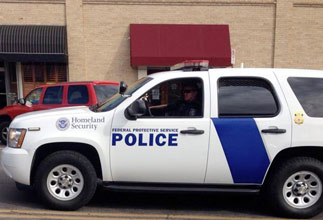 Armed Homeland Security agents are now conducting “community outreach” programs based around maintaining a visible presence in order to “let people know they’re in the area.”

News channel WNCT 9 received calls from alarmed residents in response to reports of numerous DHS vehicles parked outside a bankruptcy court in Greenville, North Carolina. However, the “heavy presence” was not because of any specific threat associated with the building.

DHS officials told the station that armed Homeland Security agents were out in full force “as part of their community outreach to let people know that they are in the area.”

The feds were also present in order to remind people about the DHS’ “See Something, Say Something” domestic snitch program.

The visible presence of armed federal agents for no other reason than to represent a show of force will only deepen concerns that the Department of Homeland Security is becoming America’s domestic standing army, a notion posited by the Rutherford Institute’s John Whitehead in a widely circulated article last month.

“The menace of a national police force, aka a standing army, vested with so much power cannot be overstated, nor can its danger be ignored,” wrote Whitehead, before listing numerous examples of how the DHS is instrumental in pushing America’s decline into a militarized police state.

Frustration also centers around the fact that federal police are keeping themselves busy watching the American people while the country’s borders remain in a state of near chaos.

As we reported recently, armed DHS agents, backed up by a Black Hawk helicopter and two armored vehicles, also staged a show of force in the small Illinois town of Livingston, all to catch one individual who is accused of downloading indecent images.

The armed agents in the report out of Greenville were from the Federal Protective Service, a subdivision of the DHS.

As we reported last year, Federal Protective Service officers were hired to guard an IRS building in St. Louis during a Tea Party protest against the federal agency’s discrimination targeting conservative groups. The FPS has previously been used to spy on protesters. In 2011, the DHS asserted that it had every right to spy on peaceful protest groups and had been using Federal Protective Service (FPS) agents to do so since at least 2006.

Last October, the Department of Homeland Security announced its intention to spend $80 million dollars on hiring a raft of armed guards under the auspices of the FPS to protect IRS and other government buildings in upstate New York during “public demonstrations” and “civil disturbances.”