Are We Witnessing The Weirdest Moment In Economic History? 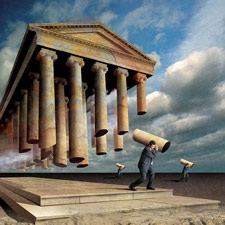 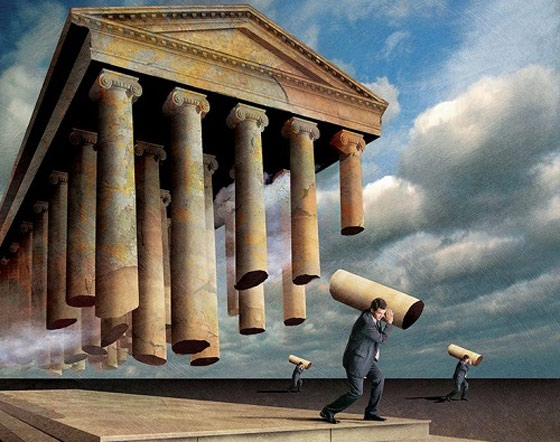 It is an unfortunate reality that most people tend to be oblivious to massive sea changes in geopolitics and economics. You would think that these events would catch the immediate attention of everyone as they happen, but usually it is not until they realize that the microcosm of their personal lives is subject to the consequences of the macrocosm that they wake up and take notice.

There are, however, ways to train yourself to pick up on signals within the news cycle and within political and financial rhetoric; signals that indicate a great shift is perhaps on the way. Sometimes these initial signs are subtle, sometimes they are as subtle as a feminist slut-walk. I would point out that over the next few months there are dangerous correlations so numerous and blatant in the economic sphere that I would almost rather watch a marching gaggle of frumpy feminists wearing nothing but electrical tape than bear witness to the mayhem that is about to strike the unwitting public.

What am I talking about? Well, let’s go through the list…

As my readers know well, I have been warning since before the election that the Fed would use a Trump presidency as an opportunity to pull the plug on near-zero interest rates and remove a primary pillar supporting stock markets — stock buybacks made possible by free overnight loans to numerous banks and corporations. Without QE and low interest rates the equities bubble will inevitably implode.

Corporate earnings certainly aren’t holding up stocks, neither is GDP or consumer spending. The Fed is the only determining factor of the ongoing bull market. Anyone who claims otherwise is probably a mainstream analyst or overzealous day trader with a vested interest in keeping the illusion going.

It is not surprising to me at all that the “rate hike odds” for March have been increased by mainstream analysts to 90% in the span of a week. I don’t know why anyone uses these arbitrary odds as an indicator of anything. I’ve been receiving emails all month asking me if I still believe the Fed will hike rates while the odds are “so low.” Look, the Fed does not make decisions at these meetings. They make decisions months in advance and the meetings are window dressing.

Too many people operate under the delusion that the central bank wants to continue propping up stocks, which is why they cannot grasp why the Fed would raise rates. In reality, the stage has been perfectly set to allow the bubble to implode. When the elites have a perfect scapegoat, they use it, and conservative movements represent that perfect scapegoat today.

The important thing to remember, though, is the timing of this particular meeting…

So, in case you weren’t tracking the economic situation two years ago, the U.S. government almost went bust (in a sense) in 2015. The debt ceiling sets limits on how much the government can borrow to fund itself, and that limit was hit hard under the Obama administration after he managed to nearly double the national debt during his tenure. Congress passed legislation to allow borrowing to continue until March 2017, and of course, much of that capital was “borrowed” from the Federal Reserve, which, of course, creates it out of thin air. With the return of the debt ceiling, the question is — will Congress be able to extend and delay again? With Trump running on a platform of fiscal responsibility, CAN they extend again?  Do they even want to, or is this an engineered crisis event?

Once again, the timing of all this is a little odd. The Fed is raising rates into the first year of the Trump presidency leaving equities increasingly open to destabilization. In addition, the government might not be able to continue borrowing from them, or there will be a renewed extension but the costs of borrowing will run much higher. In either case, this month seems to pronounce the beginning of something; a considerable move away from the standard operating procedures that the elites have been using for the past several years. With such changes come consequences, always.

The skeptics have been telling me for months that even though I was right about the Brexit vote victory the elites “would never allow” the British to leave the EU. Well, it doesn’t look that way to me so far. Theresa May plans to formally notify the EU of British exit on March 15th triggering two years of negotiations which will undoubtedly send economic shock waves throughout the globe on a regular basis.

Of course the Brexit will move forward! Why not? Globalists need a continuing atmosphere of crisis to distract the masses from their great global reset, and they need multiple scapegoats for the economic disaster that their reset will cause. Enter conservative movements in Europe; once again the perfect target to pin a crisis on.

Yet another election in which the EU hangs in the balance. Recent polls indicate that Marine Le Pen, the designated “populist” candidate, is falling behind. I have to ask, though, have we not learned our lesson yet on the meaninglessness of political polls? I think most of us have.

I believe Le Pen will be one of the final two candidates to move on to the election in May, and though I am not as certain as I was on Brexit and Trump, I am going to go ahead and predict a Le Pen win. If there is any sizable terrorist event in the next couple of months in the EU, or expanded Muslim riots, she is a guaranteed win. This brings up the very real prospect of a “Frexit” in the near future, and analysts should expect that a Le Pen win will be met with some panic in the financial world.

The Italian political process is a little confusing to me, but what I can tell you is that this spring or early summer you will probably be hearing a lot more about it. Former Italian prime minister and current Italian Democratic Party leader Matteo Renzi is set to decide on a the date for a leadership vote, which may come as early as April 30th. The outcome of this vote will likely decide how soon the next official Italian election will take place.

The election is required to be held before May 2018, but there is increasing pressure to hold elections in 2017, perhaps even this coming summer. I would not be at all shocked to see a surprise announcement of an early Italian election after the leadership vote is held.

Why should anyone care? The consensus is that Renzi’s party will be overrun by anti-EU factions and that this may result in a kind of “Italiexit.” The outcome of Italy’s series of votes and political restructuring will have wide reaching effects on the psychology of the markets for many months to come.

Yes, even Germany is quaking this year in the wake of a potential “populist” tsunami. Angela Merkel is exceedingly unloved by her own people lately as her approval ratings collapse. Once-silent sovereignty champions in the country are becoming more and more vocal about Merkel’s rather insane open immigration policies which were the key element that drew millions of Muslims into the EU. It was the German government’s promise of endless entitlement programs that created the incentive for the mass migration in the first place, and now, finally, the German people are fed up with the complete lack of cultural assimilation and what many see as the destruction of western values.

I do not think that Germany will abandon the supranational concept of the EU regardless of the outcome of the election, but the removal of Merkel would signal a less agreeable Germany, which would exacerbate the already tottering European Union. Meaning more economic uncertainty in 2017.

If you thought 2016 was weird, I suggest you get comfortable with the surreal because it is not going away anytime soon. 2017 is a veritable treasure trove of falling elevators, and I haven’t even covered half of the issues facing the economy this year. But what about the macro-analysis?

To summarize, it seems to me that many of these events, stacked so closely together, are not coincidental in their timing. As I have noted in articles such as The Economic End Game Explained, globalists have been openly planning for decades to set in motion a vast financial overhaul and the launch of a single global economy and currency (the seeds being planted starting in 2018). If this is still their timeline, then it would follow that they would need a series of fiscal earthquakes designed to shake up the “old world order” to make way for a “new world order.”

Perhaps each of these events will result in a “stable” outcome and there is nothing to be concerned about. That said, I don’t believe in chance. Most geopolitical outcomes are influenced by internationalist players, which makes the outcomes of these events predictable. This is what made the Brexit predictable, and it is what made Trump’s victory predictable. Everything about the confluence of political and economic events in 2017 suggests to me a festering crisis atmosphere.

As I have always said, economic collapse is a process, not a singular moment in time. This process lulls the masses into complacency. You can show them warning sign after warning sign, but most of them have no concept of what a collapse is. They are waiting for a cinematic moment of revelation, a financial explosion, when really, the whole disaster is happening in slow motion right under their noses. Economies do not explode, they drown as the water rises one inch at a time.