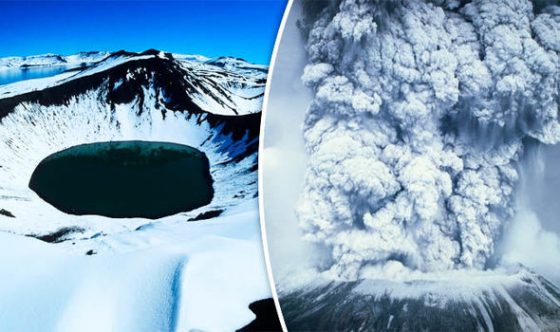 Scientists are sounding the alarm about a volcano eruption in Antartica that could cause global health problems. The ash from this eruption could encircle the globe, affecting millions of people.

Deception Island, off the coast of the Antarctic Peninsula, is a hotbed of volcanic activity with at least 50 craters spread across the region. A recent study done in the area by scientists has found evidence that an eruption on the island could disrupt air traffic on continents in the Southern Hemisphere, including South America and Africa. It could also cause some major health concerns for the whole globe.

The findings of the research show that Antarctica’s volcanoes can have an effect across the world, says Charles Connor, a geoscientist at the University of South Florida in Tampa not involved in the research. “We have to reassess the potential hazards for global transportation networks posed by even these remote volcanoes.”

“Ash emitted during explosive volcanic eruptions may disperse over vast areas of the globe posing a threat to human health and infrastructures and causing significant disruption to air traffic,” scientists warned in their report.  “Volcanic ash emitted from Antarctic volcanoes could potentially encircle the globe, leading to significant consequences for global aviation safety.”

The study revealed the “significant consequences to global aviation” after reviewing computer models of ash flows from different types of eruption during different seasons. The research is the first of its kind investigating the horrifying impact of ash from an Antarctic volcano on the rest of the word. “No attention has been paid to the potential socio-economic and environmental consequences of an ash-forming eruption occurring at high southern latitudes,” the study declared.

Adelina Geyer, a geologist at the Institute of Earth Sciences Jaume Almera in Barcelona, Spain, and colleagues focused on Deception Island because of its history of eruptions—30 or so in the past 10,000 years, and one as recently as 1970. It is also a popular destination: Both Argentina and Spain manage scientific research bases on the island, and tourists come to admire the world’s largest colony of chinstrap penguins and the rusted boilers and tanks that are relics of the early 20th century whaling industry there.

Geyer’s team modeled an eruption on Deception Island by simulating different column heights for volcanic ash: 5, 10, and 15 kilometers. (Indonesia’s Mount Agung, when it erupted last month, sent ash billowing up 9 kilometers.) The height of the plume determines which wind patterns it encounters, which, in turn, affects its dispersal. The researchers used an atmospheric transport model to track the way ash would disperse on regional and global scales and assess its possible effect on air travel. –Science Mag

Planes are under threat because the ash can clog engines and fuel lines causing them to stall and potentially fall out of the sky. “We demonstrate here that ash from high southern latitude volcanoes may pose a threat higher than previously believed,” the study concluded.

But the health effects of an eruption on Deception Island could be even more horrific than the economic impact. Volcanic ash distributed globally could cause health issue worldwide.