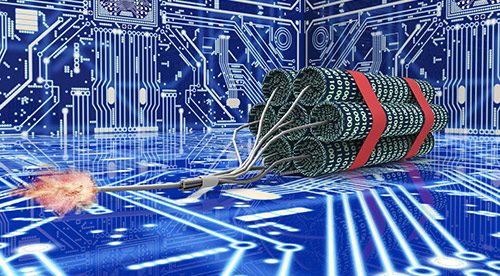 This situation screams “false flag.”  Joe Biden has threatened to retaliate against “hackers” if they are found to be Russian. And magically, they are Russian, according to mainstream media.

A group of Russian-speaking hackers have claimed responsibility for a massive ransomware attack over the holiday weekend that hit 200 U.S. firms and hundreds more worldwide, with the group demanding $70 million in bitcoin to restore the companies’ data in the latest debilitating cyberattack to hit the U.S. this year, according to a report by Sky News.

In their first face-to-face meeting in June, Biden warned Russian President Vladimir Putin against attacking U.S. infrastructure and vowed to retaliate against any future hacks.

This most recent “attack” and subsequent ransom was posted on Sunday on a blog ordinarily used by REvil, a major Russian-speaking ransomware group that recently extorted $11 million from the world’s largest meat processor, JBS, after wiping out one-fifth of U.S. beef production.   That extortion, however, pales in comparison to what the United States government extorts from its slaves. But the mainstream media ignores that extortion.

The group said: “We launched an attack on MSP providers. More than a million systems were infected. If anyone wants to negotiate about universal decryptor – our price is 70 000 000$ in BTC and we will publish publicly decryptor.” What’s hilarious about this, is that we are expected to believe they want Bitcoin in payment after the ruling class and the mainstream media said they were able to recover the Bitcoin paid by the Colonial Pipeline after that attack. We better really hone our critical thinking skills in the coming months, because the false flags they are expecting us to believe are getting crazier by the day.

There was a moment of sheer hilarity earlier today when, during a Congressional Hearing, the CEO of Colonial Pipeline Joseph Blount took the merely farcical episode of the Colonial Pipeline ransomware hack – when, as a reminder, a ragtag band of elite “Russian” hackers somehow managed to penetrate the company’s cyber defenses but was so stupid it left most if not all of the $4.4 million bitcoins it demanded in ransom in an easily traceable address for the FBI to track down and magically confiscate (it is still unclear how the Feds got the private key to access the “hackers” digital wallet) in days if not hours – and elevated it to a level of sheer ridiculous absurdity when he told Congress that he didn’t consult the FBI before paying the ransom.

This, pardon the parlance of our times, is complete bullshit: either the CEO is lying or, worse, he is telling the truth and as some have speculated, he, the FBI, and the “hackers” are all in on this so-called ransomware breach… –ZeroHedge

This hack has allegedly, affected at least 200 U.S. companies and shuttered hundreds of Swedish supermarkets over the weekend after the hackers breached Kaseya, a Miami-based IT firm, and used that access to break into its clients’ systems.

What do you want to be that the ruling class and mainstream media will tell the public Russia is responsible? If you have read any mainstream media articles about this “hack” you should know that’s coming. Biden has promised “retaliation.”  Are we about to see the beginning of what could be a “cyberwar?”

Stay alert and aware.  Something is off about this just like the last few cyber attacks. We are being played and expected to simply believe this nonsense as soon as the media spews it. Prepare. Anything could get “hacked” next by “Russia.”