An Indonesian Teenager Survived For 49 Days Adrift In Pacific Ocean 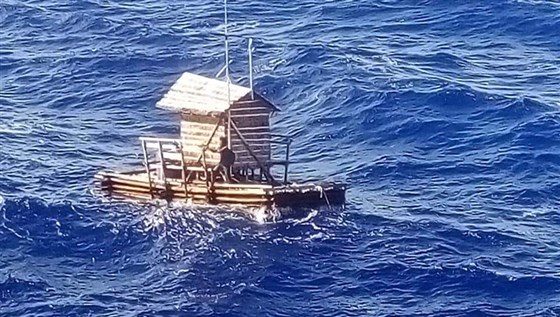 Before Aldi’s harrowing experience, the 19-year-old had a lonely job as the solitary worker on a rompong; a floating fish trap with a tiny wooden hut equipped with a gas stove, cooking utensils, and a generator. Aldi was contracted by the rompong’s owner to light lamps around it nightly for six months in order to attract fish. Each week, the owner would send someone to collect the fish and replenish supplies of food, fuel, and drinking water. It all went well until July 14. On that day, a storm snapped the rope that anchored the rompong to the sea floor off the coast of Manado, in far northeast Indonesia — some 1,300 miles from the capital, Jakarta. It sent Aldi adrift in the ocean, where he remained until August 31. He was spotted in waters off Guam by a Panama-registered bulk freighter, MV Arpeggio, which was heading for Japan, the consulate said in a Facebook post.

Aldi went unnoticed by passing ships despite waving his clothes and flashing the lamps, according to NBC News. “Every time he saw a large ship, he said he was hopeful, but more than 10 ships had sailed past him, none of them stopped or saw Aldi,” Fajar told the Jakarta Post on Sunday.

Aldi recounted being circled by a shark at one point during his 1,600-mile journey from Indonesia toward Guam, according to NBC News. He was rescued earlier this month near the U.S. island territory of Guam, officials said. He ate fish and read his Bible daily during the ordeal.

Aldi said that since he was only equipped with a week’s worth of supplies on board, he had to improvise in order to survive. “After he ran out of the cooking gas, he burned the rompong’s wooden fences to make a fire for cooking,” Mirza Nurhidayat, another consular official told the Jakarta Post. “He drank by sipping water from his clothes” that were damp from the sea.

“Aldi said he had been scared and often cried while adrift,” Fajar Firdaus, a diplomat at the Indonesian consulate in Osaka, told the Jakarta Post. Adilang recuperated from the ordeal in Japan with consular officials and was later reunited with his family at their remote coastal village. He is in good health.