An Amish Community In Pennsylvania Has Reached “Herd Immunity” 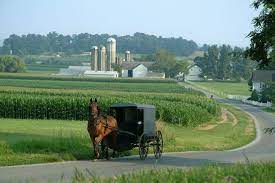 Without any vaccines at all, an Amish community in Lancaster County Pennsylvania has reached herd immunity from the COVID-19 scamdemic that continues to panic everyone else who remains glued to their TV. “Experts” have said that interaction with others and getting the virus has lead to herd immunity, but you should still get the “vaccine.”

Is this yet another piece of evidence that the lockdowns did more harm than good? We would say so, especially considering they don’t want herd immunity to come naturally, they want it forced into your body in the form of experimental gene therapy.

Experts at a New Holland Borough Healthcare Center said around 90% of households dealt with at least one coronavirus case after churches reopened last year. “Herd immunity refers to the number of people in a community or a country, for that matter, that have some protection against an infectious process,” explained Dr. Mike Cirigliano of the Perelman School of Medicine at the University of Pennsylvania, according to a report by Fox News affiliate Fox 29.

This news is not being widely reported on, but you can bet you’ll be hearing all about the fourth wave, the new variants, and the need to get “vaccinated” against this deadly (99.98% survival rate) disease.  Why? Isn’t it obvious:

MSM Continues To Fear Monger Over The “4th Wave” OF COVID

They Moved The Goalposts AGAIN: COVID Variants Mean “All Bets Are Off”

But don’t worry. The propaganda continues:

“We don’t really know how long you’re protected and we’ve seen cases where people get re-infected,” Dr. Cirigliano added. “I don’t personally believe that we will reach herd immunity going forward without the use of vaccination.

Medical experts are debating whether the news out of the Amish community is really as good as it sounds, especially with new variants of the virus popping up across the country.

“The idea that, well we will just let [herd immunity] happen naturally, in my opinion, is a bad, bad idea. We need to vaccinate to prevent severe illness and death,” Dr. Cirigliano said. -FOX 29

At least articles such as this one show the true colors of the rulers and those who prop them up. They will continue to treat us like slaves until we understand that we aren’t and have no obligation to obey or listen to or believe anyone. Use your own discernment and enhance your critical thinking. Don’t just believe things because I’ve typed it here or someone else said it. Look into things, apply mortality and objectivity. More often than not, the mainstream media and comments from the masters and elitists don’t pass the logic sniff test.