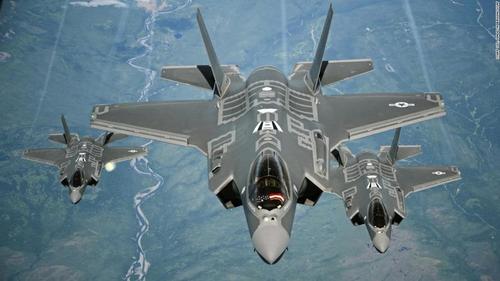 A mere day after the Department of Defense touted its first ever combat engagement in Afghanistan, the multi-billion dollar in development and cutting edge Marine F-35B stealth fighter has now experienced another first — one has crashed near a Marine base in Beaufort, South Carolina.

First photo to emerge near the crash site via local news affiliates.

“The U.S. Marine pilot safely ejected from the single-seat aircraft and is currently being evaluated by medical personnel,” said the statement. “There were no civilian injuries. Marines from MCAS Beaufort are working with local authorities currently conducting standard mishap operations to secure the crash site and ensure the safety of all personnel in the surrounding area.”

The jet was reportedly on a training mission and appears to have gone down over a forested area, as early photos show black smoke rising over a tree line in a rural area.

The Beaufort County Sheriff’s Office has closed off the area, and an investigation is underway.

Residents reported hearing multiple explosions in the area, and an anonymous Marine Corps source has told Stars and Stripes that the over $100 million plane has been completely destroyed:

The aircraft was a total loss, according to a Marine official, who spoke on condition of anonymity. An investigation into the incident could take months to determine the cause, the official said.

Kensley Crosby, a Beaufort resident who lives near the area where the F-35B crashed, told the Beaufort Gazette newspaper that she heard an explosion and saw smoke coming from the scene. Kensley said she heard three to four additional explosions within 30 minutes of the crash.

According to CNN, “the announced per-unit price tag for the Marine Corps F-35B was $115.5 million.” And the total acquisition cost for the advanced fighter produced by Lockheed Martin is projected at $406.1 billion, which has made it controversial as the single most expensive defense development program on a single weapons system in US history.

US military officials confirmed in the hours after the news broke that it marks the first time the F-35B has crashed either in training or in operations. The fighter reportedly completed its first operational airstrikes against Taliban targets on Thursday, which US official social media channels heavily promoted throughout the day.

The Pentagon has long planned to make the joint strike fighter the main combat aircraft for the Air Force, Navy and Marine Corps; and the DoD previously announced plans to purchased more the 2,600.

The version of the F-35B that the Marine Corps uses has the ability to take off and land vertically, however, the Marine Corps said Friday’s crash did not occur while attempting either, but while in flight.