Yet again the real data confirms what most of us already know: the U.S. economy is in serious trouble.

One look at this chart and you’ll understand what we mean.

One place where nominal and real income data can absolutely not be fudged is the Social Security Average Wage Index based on withholding data reported by employers, particularly the median wage, whose nominal change can then be extrapolated in real terms using CPI to create a chained series. And here is where things get messy: as John Lohman demonstrates in the chart below, real income based on median wages, dropped (in real terms) by 1.2% – the biggest year over year slide in over 20 years of data… 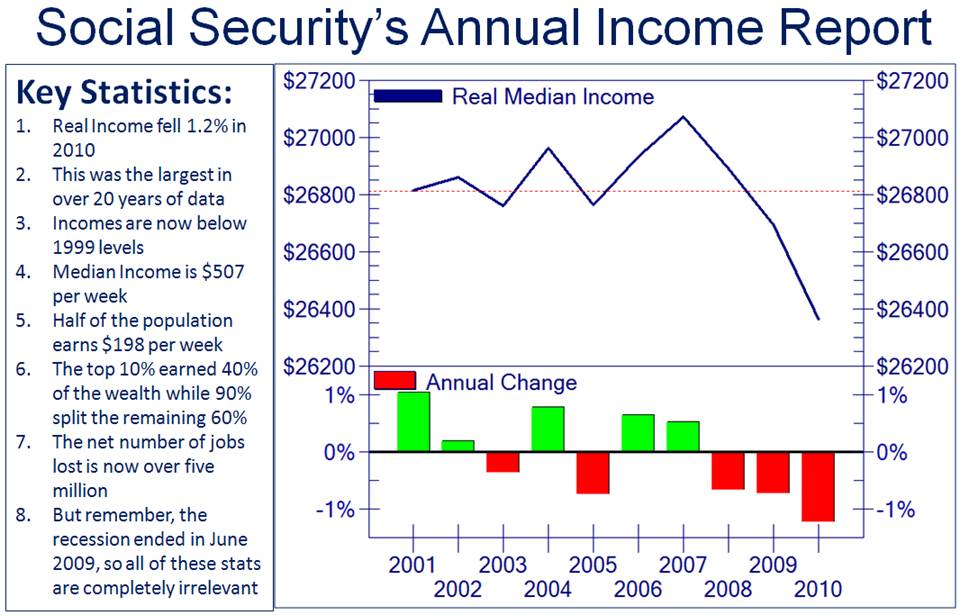 What we are seeing is a perfect storm of horrendous economic data on almost all fronts. Manufacturing costs are up, essential basic goods have skyrocketed in price over the last three years, and more people are left unemployed every single month than the month before. The New York Times reports that gloom has gripped the U.S. consumer:

The United States has a confidence problem: a nation long defined by irrational exuberance has turned gloomy about tomorrow. Consumers are holding back, businesses are suffering and the economy is barely growing.

There are good reasons for gloom — incomes have declined, many people cannot find jobs, few trust the government to make things better — but as Federal Reserve chairman, Ben Bernanke, noted earlier this year, those problems are not sufficient to explain the depth of the funk.

That has led a growing number of economists to argue that the collapse of housing prices, a defining feature of this downturn, is also a critical and underappreciated impediment to recovery. Americans have lost a vast amount of wealth, and they have lost faith in housing as an investment.

They lack money, and they lack the confidence that they will have more money tomorrow.
Many say they believe that the bust has permanently changed their financial trajectory.

The paradigm is shifting, and there is no turning back. The jobs bill won’t save us. More stimulus won’t save us. The worthless, counterproductive actions of our elected representatives have failed miserably – likely even made things worse.

The economic situation of this nation is dire. We’re well outside of short-term cyclical downturn territory here. There will be no meaningful growth 18 months from now, as this is not a recession. We’re talking deep depression levels of economic inactivity that may potentially span decades.

This may not sound feasible to some, but just look at history for guidance to put the reality of the situation into perspective. When paradigms shift, the reverberations affect some generations for their entire lifetimes. Many people will not be able to make the adjustment, and they may very well end up living the remainder of their lives in poverty and squalor. Simply look to recent historical accounts of the multi decade periods in which we saw the German Wiemar hyperinflation, the Great Depression in the U.S., and the countless examples of generational poverty throughout the world in just the last 100 years. It has happened before. It will happen again.

Thus, when we discuss the ‘preparedness’ and ‘self reliant’ lifestyles, we’re not just talking about stockpiling supplies. Yes, this will be critical in getting you through the crunch – a term James Rawles, author of Patriots and Survivors, used to describe a period of economic collapse and political upheaval. But what will you do when we come out the other side – during what we might call the period of ‘reconstruction.’

It is time now to make the psychological, intellectual, spiritual, occupational and physical adjustments that will prepare you to live in a paradigm where the world as we know it today does not exist.

The alternative was best summed up recently by Kerry Lutz of the Financial Survival Network:

There are people who are still connected to the old one and can’t conceive of life without that old paradigm. I think you saw that in the Great Depression. A lot of people never recovered from it because once that hit it was the end of their lives.

You can embrace the changes and accept them as the new paradigm – or, you can bury your head in the sand and pretend you live in a magical utopia. The consequences of maintaining the latter as your world view will severely impact your quality of life for years to come – so choose wisely.