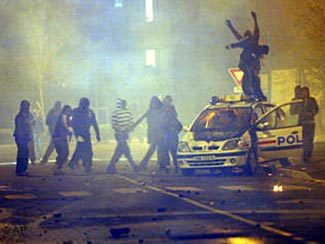 A collapse is coming… but not as quickly as many are expecting.

There are many people high up in the power structure who not only see an end to the dollar coming soon, but an economic collapse that could trigger the death of tens of millions of Americans – rendered vulnerable by the lack of services and the stopping of checks, and harmed by the resulting looting, starvation and violence that is likely to occur.

According to an anonymous source who claims to have high level insider sources, everything from the power grid to the grocery store, to the government assistance checks that huge portions of the country depend upon will simply not be there. The result is pure chaos, tragedy and destruction.

That source is “V, the Guerrilla Economist,” who spoke to USA Watchdog’s Greg Hunter after the dire prospect of collapse:

China and others are positioning their currencies to rise with the demise of the petrodollar, which is based around U.S. military hegemony around the world – an empire of illusion that cannot last, and is under threat by the trend of foreign affairs. A global basket of currencies is expected to replace the dollar, but in the meantime, the dollar may become worthless, and people who have no plans or preparations may starve.

“V” claims that an economic crash will not come this year. Instead, it will come in the next two years to 30 months, in the wake of the end of the reign of the dollar. America may become a tragic repeat of the Weimar Republic, as other superpowers (namely, the BRICS nations) fill the void of the once-mighty United States.

“V” explains, “We are entering a time which I call the collapse point. At the collapse point, there is going to be massive systemic shock. Why? Because you have one paradigm and one system being done away with, which is the dollar. It is going to be replaced by a new system. During that transition period, you cannot expect to trade anything because what do you trade it in? That’s why the Chinese are gearing up their own gold price fix. Once that collapse point happens and the world reels from the systemic shock, the Chinese gold price fix and the BRICS system will be there to fill in that vacuum. That is what’s being set up right now.”

“I was on a conference call at the beginning of the year. On that call were seven guys and some of the smartest people in the world.   They work in various sectors of government and various sectors of the military, and the question was asked what does an economic collapse in the United States look like? The initial, unanimous answer was you can expect anywhere from 25 million to 50 million dead in the first 90 days. I almost fell off my chair. Then they said, it’s real simple. You are going to have people dropping dead from violence, looting, rioting, lack of medication; we are the most medicated country on the planet. People also will be dropping dead from starvation, dehydration and disease. That’s going to kill a large swath of people. If you look at the big population centers: in New York you got 8 million people, in L.A. you got a couple of million. It would be very easy to rapidly build those death numbers up.”

Can you survive the crash here in the U.S.? “V” says, “My people say you need to have enough food and supplies for three months. I say to be safe, you should have supplies for six months. . . . My hope and prayer is “We the People” get this government and these things under control and prosecute these criminals at some point. . . . You cannot stop what is coming. You cannot stop this collapse. It’s too far gone and too far forward. You are not going to stop it, but right now, the race is for who is going to win on the other side. Is it going to be us, the American people? Or is it going to be the criminal cabal that is running D.C. right now?”

The source argues that the system of elites in the U.S. are weaker than at any other point in history, and the question remains whether constitutional Americans will reclaim the country in the devastating aftermath, or whether a criminal gang will remain in charge of the ashes of what was America, using petty power to rule over a subservient and scorched post-collapse America.

Will the real patriots come forward? Will real money be restored? Are you prepared for what is coming?

Watch And Learn What An Economic Collapse Looks Like: “I Hope You’re Taking Notes”

The Collapse Has Already Begun: “Currencies Are Crashing Hard, Recessions Are Starting”

Aftermath: What Will Life Look Like When The Lights Go Out?

Aftermath: Getting To Your Retreat When The Threat Is Real