It took Paul Singer’s Elliott Management less than 24 hours to raise $5 billion earlier this month, however it is safe to say he won’t be using any of that cash to buy stocks at current prices, or even BTFD. Instead, as he writes in his Q1 letter to investors, the legendary hedge fund manager thinks “that it is a good time to build a significant amount of dry powder,”

The reason for that is if, or rather when, Trump’s pro-growth agenda fails to be implemented, “all hell will break loose” and that a recession looms as the artificial crutches propping up risk assets are pulled out:

Given groupthink and the determination of policy makers to do ‘whatever it takes’ to prevent the next market ‘crash,’ we think that the low-volatility levitation magic act of stocks and bonds will exist until the disenchanting moment when it does not. And then all hell will break loose (don’t ask us what hell looks like…), a lamentable scenario that will nevertheless present opportunities that are likely to be both extraordinary and ephemeral. The only way to take advantage of those opportunities is to have ready access to capital.

Isolating the impact of the “Trump Put” as described recently by Deutsche Bank, Singer writes that “although the growth agenda of the Trump administration is slow to get off the ground, markets still anticipate that much of it will be enacted, sooner or later.” And yet, according to most metrics, the Trump trade has already been priced out of most markets with the notable exception of equities, which as Bank of America pointed out in a note last week, are now the “last one standing”. 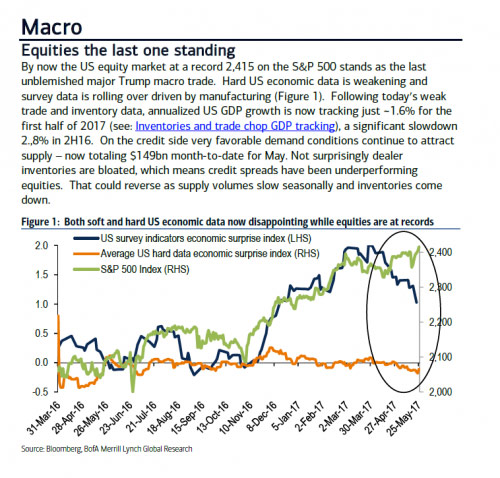 Elliott’s warning of a negative reaction in equity markets if Trump’s economic policies are not delivered takes place as the US Congress debates how to fund proposed tax cuts for individuals and companies, and whether lawmakers are prepared to blow out the budget deficit as Trump’s plan would. So far, all of Trump’s various economic initiatives appear to have stalled permanently in Congress, with the market giving pricing in little possibility of their passage.

In this context, Singer warns that “there are actually forces in place that could point to a relatively near-term recession in the absence of solid new pro-growth policies.” And with rates already at ultralow levels, the Federal Reserve won’t be able to provide a sufficient QE cushion, as it did during the great financial crisis. Which is why absent a procyclical push, the US economy may have no choice but to contract. Which is ironic because Singer, a prominent Republican donor, originally staunchly opposed Mr Trump as its candidate, before meeting the President at the White House in February where Trump claimed “he’s given us his total support”.

The manager of $32.6 billion in AUM once again points to his favorite nemesis, the Federal Reserve, and says that “we live in a time when extraordinary worldwide monetary policies have created bubble after bubble.” Warning that QE has done nothing to address the fundamental issues of the economy, Singer said that rising sovereign and private debt loads will come back to haunt the markets and policy makers.

Expounding on a popular theme from his previous letters, Singer said that not only has the mess from the great financial crisis not been cleaned up, but all the wrong measures have been used to address the problem.

“Since the GFC, we have believed that the extreme monetary policy (ZIRP, NIRP, and QE) prevalent throughout the developed world was unsustainable and risky.” He explains – as he has done every other quarter since 2008 – that the solution to a crisis resulting from financial engineering isn’t more financial engineering, but addressing the real issues that caused the problem to begin with. That has not beed one, and instead “the solution to overindebtedness should not have been the creation of more debt, and the problem of inadequate growth should not have been solved by money-printing and ZIRP/NIRP.”

“On the face of it, year after year of the unusual and risky policy mix has not caused the collapse of any major currencies or significant inflation (other than in asset prices),” resulting in a world that has been put to sleep by pervasive complacency. “This seeming lack of empirical proof of the lurking danger has lulled most investors into thinking that the elevated prices of stocks and bonds, and the historical fall in price volatility in financial asset markets, is somehow a permanent condition.”

To be sure, Singer has been one of the most outspoken market skeptics during the “central planning” phase of markets, issuing periodic warnings about China’s debt-fueled boom and price bubbles in financial markets inflated by central banks’ ZIRP/NIRP and bond buying policies of central banks. Maybe this time will be different.  Even so, Singer’s stated skepticism hasn’t prevented him from outperforming not only the S&P in recent peers, but the vast majority of his peers.

So what is Singer’s advice for today’s investors? In a time of historic market complacency, Singer believes that “the trick in such periods is to keep out of trouble.” Eventually the markets wake up, and when they do, that’s when “all hell will break loose.” When that moment comes, Singer is confident he will be ready.