Alan Greenspan Warns That Dangerous “Crazies Will Undermine The System” 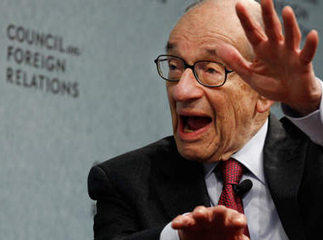 Former Federal Reserve chairman and consummate insider Alan Greenspan discussed his concerns that things were tipping out of “equilibrium” and spinning into instability and chaos.

Stagnation, lack of growth, and forced growth that is only going through the motions. It is all catching up with us, and it may be the fault of “the crazies,” Greenspan warned.

But who exactly is he referring to?

•Is it his own crowd of the feckless and incompetent choking the life out of America through monetary policies?

•Or maybe the suicidal nihilists trading derivatives on Wall Street and playing with matches?

•Or the class of working bankers and lenders, piling up more incendiary fertilizer material on the load before the crash comes, flinging more excrement into the fan and leveraging a complete and total disaster of epic proportions?

•Or is it the class of power brokers, who quietly, coldly shifted around a few pieces that cost the other side the entire farm, and the shirt on their backs, too?

Alan Greenspan doesn’t specify. He just warns us to heed the danger of “the crazies.”

Former Federal Reserve Chairman Alan Greenspan voiced concern that the U.S. economic and political system could be undermined by what he called “crazies.”

“It is the worst economic and political environment that I’ve ever been remotely related to,” Greenspan, 90, told a conference in Washington Tuesday evening sponsored by Stanford University and the University of Chicago.

Greenspan repeated his concern on Tuesday that increased government spending on social security and healthcare are crowding out private investment and leading to slower economic growth. He bemoaned the fact that neither presidential candidate was talking about reining in those expenditures.

“Nobody wants to discuss it” for fear of a political backlash, he said.

Greenspan echoed the ‘confessional’ warning of Lord Jacob Rothschild, who cautioned that central banks were undertaking an ‘unprecedented experiment,’ which was the greatest in financial history. Rothschild stated:

“The six months under review have seen central bankers continuing what is surely the greatest experiment in monetary policy in the history of the world. We are therefore in uncharted waters and it is impossible to predict the unintended consequences of very low interest rates, with some 30 percent of global government debt at negative yields, combined with quantitative easing on a massive scale,” Rothschild writes in the company’s semi-annual financial report.

The banker notes this policy has led to a rapid growth of stock markets… However, the real sector of economy didn’t enjoy such a profit, as “growth remains anemic, with weak demand and deflation in many parts of the developed world,” according to Rothschild.

Rothschild noted the “anemic” growth that has forced so many to surrender their wealth, and accept meager returns as a pittance, just as Greenspan warned of “stagflation” and “weak demand.”

It all amounts to the same thing:

On the economic front, the U.S. is headed toward stagflation — a combination of weak demand and elevated inflation, according to Greenspan.

“Politically, I haven’t a clue how this comes out.”

“We’re not in a stable equilibrium,” he said. “I hope we can all find a way out because this is too great a country to be undermined, by how should I say it, crazies.”

This is the same Greenspan who stated on live TV – to the confusion of his cohorts – that the U.S. could never default because it can always print more money… the exact mentality that got us into this problem.

Yet, Greenspan also brags about the Fed’s ‘above-the-law’ status – outside the reach of checks and balances, or approval or disapproval of the President.

It is a mea culpa for the tiny cabal who hold membership in the decisions that control the world, and have set in motion (in response to the need for a “solution” after 2008) a devastating policy of reconquering the developing world, and capturing its people under the yoke of debt.

In spite of their gravitas and demeanor – assuming and erudite in the case of Rothschild and authoritative and comfortingly-dry in the case of Greenspan – both might as well blush and remark “Oopsie” to the crowds of unemployed and economically stunted people who, only a few years before, had a great deal more economic freedom and financial stability.

Naturally, none of these elite bankers knew this would be the result. And they had to do something.

Unchecked: Greenspan: No Other Agency of Government Has Overrule Federal Reserve Action

The entire economy is being encoded with the signals of a state-run sow, where the private sector feeds off the services and required investments, until nothing is left for anybody without a spot at the government teat.

This is really a big deal. The problems of quantitative easing and the financial sector are compounding with the problems of Obamacare, welfare and food assistance, and big system pensions and benefits programs.

These are the gravitational forces.

Now, a lot of people are going to be hurt, though we can be sure how the positions of these inside bankers will turn out.

The world has never been closer to collapsing back into the dark ages and the hopeless economic model of feudalism… just imagine it with an overlay of techno devices and entertainment to instill complacency.