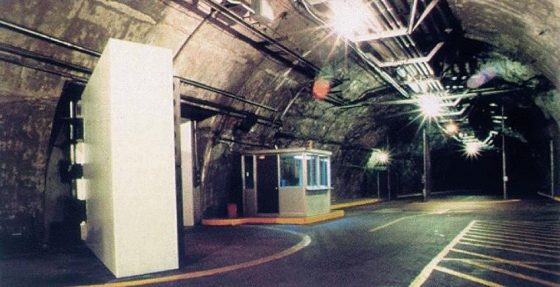 A bunker built inside a hollowed-out mountain in Colorado is only one of many secret shelters where 7,000 Americans will go to hide out from devastating nuclear annihilation. But don’t get your hopes up. These bunkers will only house the elites; those in government, while the rest struggle to survive.

Garrett Graff, the author of the book, “Raven Rock: The U.S. Government’s Secret Plan to Save Itself While the Rest of Us Die,” spoke to Inside Edition about his findings related to these secret shelters. The book is said to offer the “eye-opening” truth about the government’s plans to survive a nuclear war while a super majority of civilians will die. Not only that, the government’s money is taken from us, the taxpayer. We are paying for bunkers that we won’t be allowed to use.

The book highlights top secret locations of the impressive structures that could serve as the White House in the event of a tragic nuclear strike. There will be room for only government officials in the bunkers, however. “The government built more than a hundred of these bunkers and relocation facilities around the country,” Graff told Inside Edition.

SHTFPlan took the time to detail how the government would let us all die while they survive in the event of a nuclear war. The bunker system has been used only once; on September 11, 2001. We will let you do the math and figure out if that was a test for a coming war or not. (Consider these bunkers are in Colorado and the attacks on 9/11 took place on the east coast.)

We now have a few images of the secret bunkers that will be used to keep those who start the war, safe from their actions. The government allows very few pictures to be taken of this impressive structure anymore. The buildings are free-standing buildings connected by hallways and ramps inside the mountain. The buildings are on 1,300+ giant springs and built 18 inches from the rock walls in the mountain, so they can move independently if there is an earthquake or a blast. Below is an image of the tunnel entrance to the North American Air Defense (NORAD) Space Command Cheyenne Mountain Complex. Most cannot even get close to this entrance anymore. The official guarded entrance station is about 1.5 miles away from the famous mountain entrance. 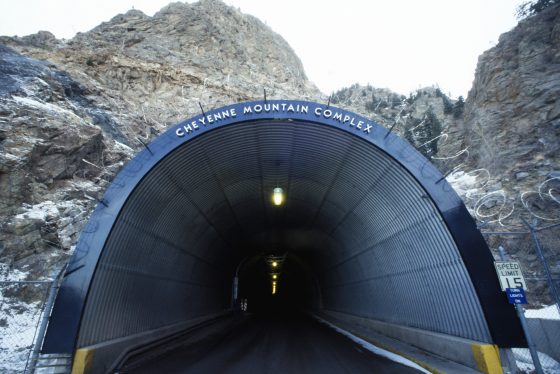 The massive complex seems even more sinister when looking at the door which will separate the elites from the rest of us in the event that they start a nuclear war. There are two 23-ton blast doors between the main tunnel and the office buildings complex. During the Cold War, one door was always closed. That meant those working during the Cold War era had to enter through the first door, wait in a middle room for the door to be closed and sealed, then wait for the second door to be opened.

It’s quickly becoming clear that perhaps the “conspiracy theorists” could be right. Their warnings seem to continually fall on deaf ears, however, as we go about our day and pay our taxes like the good people we are so that government officials can afford to survive the nuclear apocalypse they create.