A Dark Matter “Hurricane” Is On A Collision Course With Earth 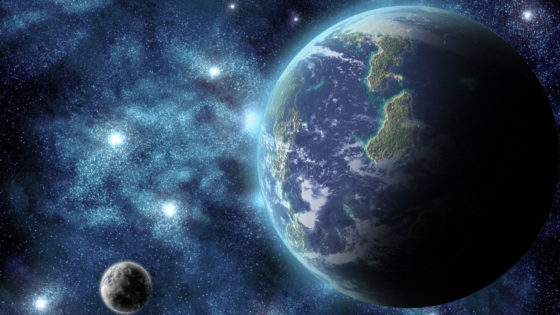 The Earth is currently passing through a dark matter “hurricane.” Scientists are predicting that the Earth will be battered by this dark matter hurricane for the next one million years.

Scientists studying the nature of gravity and the movement of stars and planets discovered that the space between galaxies contains something else that we can’t yet account for. They have called that unaccountable “something” dark matter.  It’s an invisible and as-of-yet undetectable phenomenon believed to make up the bulk of matter across the universe, according to a report by RT.

While scientists have never directly detected dark matter, and they are not entirely sure what it is, they do know “something” has to be there. And now, scientists say Earth is going through a dark matter hurricane.

Published in Physical Review D, a study led by Ciaran O’Hare from the University of Zaragoza in Spain looked at a collection of nearby stars moving in the same direction known as the S1 stream. These are “believed to be the remnant[s] of a dwarf galaxy that was swallowed by the Milky Way billions of years ago,” a statement from APS Physics noted.

The S1 stream consisting of 30,000 stars was found last year by ESA’s Gaia satellite, which is mapping a billion stars in our galaxy. About 30 such streams have been found in our galaxy, each the remnant of a previous collision.

S1 is particularly interesting, however, in that it is currently “blowing” past us at about 500 kilometers (310 miles) per second. And the researchers said that this may produce noticeable effects on the dark matter near us. –IFL Science

Our Solar System lies directly in S1’s path but, despite the fact that it contains 30,000 stars or so, we’re not due for a cosmic knockout anytime soon. Thankfully, everything is spread out nicely. However, barrelling along in S1’s wake is a vast array of dark matter. The group of researchers who published the study in Physical Review D, postulate that by studying this stream and the behavior of its potential components, we may finally be able to detect dark matter for the first time. Thankfully, humanity will have a few million years of valuable research time before the stream fully passes us by.

“(There are) tons of these streams all over the galaxy, some of them are really huge and you can see them in the sky,” explains Ciaran O’Hare.  “As the S1 stream ‘hits the Solar System slap in the face,’” the authors write, “its counter-rotating structure will dramatically increase the amount of dark matter appearing to come from the same patch of sky as the standard dark matter wind,” reports Cosmos Magazine.

“Indeed, it should produce a tell-tale ‘ring’-like structure around this wind, something that directional dark matter detectors… could easily detect in future.” ScienceAlert also noted that it might be possible to detect axions from the stream, which are theoretical particles 500 million times lighter than an electron that could constitute dark matter. “[T]hese ultralight particles – which we can’t see – could be converted to photons which we can see, in the presence of a strong magnetic field,” they said.