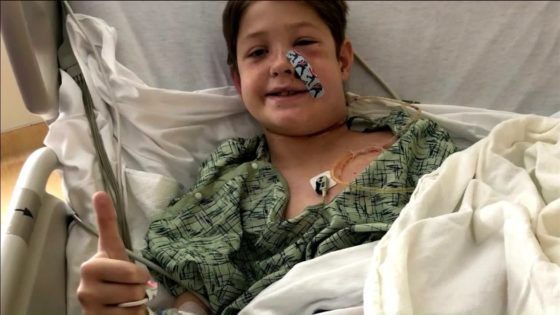 The human body is truly a phenomenon that is often incomprehensible.  Oftentimes, the smallest microbe can kill, but other times, young children can survive being impaled in the face by a metal skewer.

After falling out of a tree house and landing face first on a metal skewer, a ten-year-old boy is alive and well.  His father, Shannon Miller, calls it nothing short of a miracle.  “He could have bled to death in that field, covered in yellow jackets,” Miller told WDAF.

Xavier Cunningham landed on a meat skewer that was sticking straight up out of the ground.  He fell four feet off of the ladder of the treehouse only to land on the metal meat skewer face first. Thankfully, the surgeons at KU Hospital successfully removed it from the boy’s face Sunday.  The skewer was about a foot long and nearly went all the way through to the back of Xavier’s head. “It missed his brain, it missed his brain stem, it missed the nerves, everything that’s valuable in your head, it missed everything,” said Miller.

A team of surgeons at the University of Kansas Hospital worked on a plan to remove the object. “There were several plans. There’s a plan A, B, and C,” said Miller. The surgery took hours, but it was a success.  “All I can remember is laughing and crying, cheering and just the support of my friends and family. It’s powerful,” Miller added.

“Only God could have directed things to happen in a way that would save him like this. That was a miracle,” said Miller. Xavier is expected to be released from the hospital soon and his family happily states that he’s already back to normal.  He was joking with his family and playing Xbox video games from his hospital bed.

This unbelievable story highlights just how incredible the human body can be.  Xavier is lucky and would have had a much harder time recovering had he hit that skewer at any other angle or just a little left or right.  He’s a lucky boy and we are so glad he’s doing well.