50K Evacuated From Bali, As Nation Is On Volcano Alert For Imminent Eruption 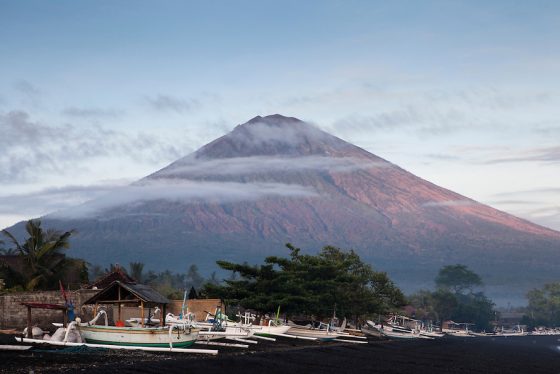 Fears of an imminent eruption on the Indonesian tourist island of Bali have led to the evacuation of an estimated 50,000 people.  The Mount Agung volcano is going to erupt, scientists say.

Waskita Sutadewa, the spokesman for the disaster mitigation agency in Bali, said people have scattered to all corners of the island and some have crossed to the neighboring island of Lombok. Indonesian authorities raised the volcano’s alert status to the highest level on Friday following a dramatic increase in seismic activity. It last erupted in 1963, killing about 1,100 people.

Villagers are staying in temporary camps, sports centers, village halls, or with friends and relatives. Some do return to the exclusion zone during the day to tend to their livestock or shift the animals to areas further from the volcano for their safety. Others say they are selling their cows because they don’t know when they’ll be able to return.

“It’s obviously an awful thing. We want to be out of here just to be safe,” said an Australian woman at Bali’s airport who identified herself as Miriam. National Disaster Mitigation Agency spokesman Sutopo Purwo Nugroho said hundreds of thousands of face masks will be distributed in Bali as part of government humanitarian assistance that includes thousands of mattresses and blankets. Indonesia is prone to seismic upheaval due to its location on the Pacific “Ring of Fire,” an arc of volcanoes and fault lines encircling the Pacific Basin.

Government volcanologist Surono, who uses one name, said the feared eruption could be huge and potentially also close airports in East Java and Lombok, according to local media reports. Agung is in the north of the island about 43 miles from the tourist hotspot of Kuta. People have been told to stay at least 6 miles from the crater, but to stay 7.5 miles away when to the north, northeast, southeast, and south-southwest.

Over the past 5,000 years, Agung has erupted once a century on average and about a quarter of its eruptions have been a similar or stronger strength than 1963. Macquarie University volcanologist Heather Handley said the eruptions in 1843 and 1963 had a Volcanic Explosivity Index of about 5 on a scale where 8 would be the strength of an ancient supervolcano eruption such as Yellowstone in the U.S. or Toba in Indonesia.

Although officials have said there is no immediate threat to tourists, a significant eruption would force the closure of Bali’s international airport, stranding thousands. The island is famous for its surfing, beaches and its elegant Hindu culture is still safe to visit. Bali’s Ngurah rai International Airport has been operating normally since the alert status for Mount Agung was raised to the highest level on Friday.