This article was originally published at The Economic Collapse Blog 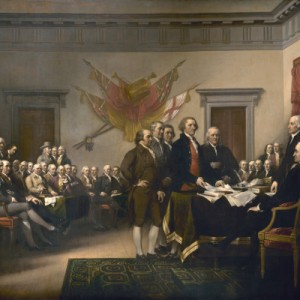 If our Founding Fathers were alive today, what would they think of America?Â  Surely they would be very proud that the United States stretches from the Atlantic to the Pacific and has built some of the most amazing cities that the world has ever seen.Â  They would probably be surprised that the country they founded went on to become the greatest economic machine in the history of the world, and they would be absolutely astounded by things like our interstate highway system and the Internet.Â  However, there are quite a number of things that they would be horrified about as well.Â  The fact that over 40 million Americans are dependent on the federal government for their daily food would be deeply disturbing to our founders.Â  Also, the fact thatÂ the U.S. governmentÂ has accumulated the greatest mountain of debt in human history would be incredibly distressing to George Washington, Thomas Jefferson and the rest of the founders.Â  But perhaps most of all, our founders would be absolutely disgusted that the land where Americans could once be free to pursue life, liberty and the pursuit of happiness has become so tightly regulated and controlled that Americans dare notÂ even squeak without the permission of the federal government.

Needless to say, our founders would certainly not understand many of our institutions or many ofÂ the advanced technologies that we have today.Â  But without a doubt they would be able to grasp how far we have fallen as a nation and how far we have strayed from the fundamental principles that they enshrined in our founding documents.Â  The United States is a much different place today than it was in 1776, and unfortunately many of the changes have been for the worse.

The following are 50 mind blowing facts about modern America that our Founding Fathers never would have believed….

#1 In 2010, not only does the United States have a central bank, but it also runs our economy and issues all of our currency.Â  The Federal Reserve has devalued the U.S. dollar by over 95 percent since 1913 and it has been used to create the biggest mountain of government debt in the history of the world.

#2 The U.S. Court of Appeals for the Ninth Circuit has ruled that U.S. government agents can legally sneak onto your property in the middle of the night, place a secret GPS device on the bottom of your car and keep track of youÂ everywhere that you go.

#3 The 50 wealthiest members of Congress saw their collective fortunes increase by 85.1Â million dollarsÂ to $1.4 billion in 2009.

#4 The U.S. government has accumulated a national debt that is rapidly approaching the 14 trillion dollar mark.

#6 Americans now owe more than $849 billion on student loans, which is more than the total amount that Americans owe on their credit cards.

#7 In 2010, Americans waste an astounding amount of food.Â  According to a study by the California Integrated Waste Management board, 63 percent of the average supermarket’s waste stream is food. When you break that down, it means that each supermarket wastes approximately 3,000 pounds of food each year.

#8 The city of ClevelandÂ plans to sort through curbside trash toÂ ensure that people are actuallyÂ recycling properly.Â  If it is discovered thatÂ some citizens are not recycling they will be hit with very large fines.

#9 Once upon a time, U.S. industry was the envy of the world.Â  But since 1979, manufacturing employment in the United StatesÂ has fallen byÂ 40 percent.

#11 Having one out of every eight Americans enrolled in theÂ food stamp programÂ is now considered “the new normal” and Americans continue to drop into poverty in astounding numbers.

#12 One out of everyÂ six Americans is now being served by at least one government anti-poverty program.

#14 Barack ObamaÂ is backingÂ a proposal to create a national databaseÂ that willÂ store the DNA ofÂ all individuals who have been arrested, even if they end up not beingÂ convicted of a crime.

#15 In 2010,Â it takes the average unemployed American workerÂ over 8 months to find a job.

#16 The U.S. government has made some parts of Arizona off limits to U.S. citizens becauseÂ of the threat of violence from Mexican drug smugglers.Â  The federal government has actually posted signs more than 100 miles north of the Mexican border warning travelers thatÂ certain areas areÂ unsafe because of drug and alien smugglers.

#17 OneÂ recent survey of last year’s collegeÂ graduatesÂ discovered that 80 percent moved right back home with their parents after graduation.

#18 In one of the very first military commissions held under the Obama administration, a U.S. military judge ruled that confessions obtained by threatening the subject with rape are admissible in court.

#20 In recent years the U.S. government has spent $2.6 millionÂ tax dollars to study the drinking habits of Chinese prostitutes and $400,000 tax dollars toÂ pay researchers to cruise six bars in Buenos Aires, ArgentinaÂ to find out why gay men engage in risky sexual behavior when drunk.

#21 Christians are being arrested and thrown in jailÂ inÂ some areas ofÂ the United States for quietly passing out Christian literature on public sidewalks.

#22 The Florida State Department of Juvenile Justice has announced that it willÂ begin using cutting edge analysis software to predict crime by young delinquents and will place “potential offenders”Â in prevention and education programs.

#23 Organic milk is now considered such aÂ national crisisÂ that the FDA has been conducting military style raids on Amish farmers in the state ofÂ Pennsylvania.

#24 TheÂ U.S. Environmental Protection AgencyÂ recently announced that they are consideringÂ a crackdown on farm dust.

#25 According to a new CDC report, nearly half of all Americans now use prescription drugs on a regular basis.

#26 Oakland, California Police Chief Anthony Batts says that due to severe budget cuts there are a number of crimes that his department will simply not be able to respond to any longer.Â  The crimes that the Oakland police will no longer be responding to include grand theft, burglary, car wrecks, identity theft and vandalism.

#27 Today, Americans are losing their homes in staggering numbers.Â  OneÂ out of everyÂ seven mortgages was delinquent or in foreclosure during the first quarter of 2010.

#28 Many of our leading scientists are now calling themselves “transhumanists” and areÂ openly proclaiming that a future where men have fully merged with machines is inevitable.

#29 Americans who spend large amounts of cash are viewed as “potential criminals” by the U.S. government in 2010.

#30 New full body security scanners going into airports all across the United States can actually see through our clothing and produce very clear and very detailed images ofÂ our exposed bodiesÂ as we walkÂ through them.

#31 The U.S.Â financial system has become aÂ massive gambling parlor in 2010.Â Â As a result, a horrificÂ derivatives bubble has developed that threatens to destroy our entire economy at any moment.Â  Nobody knows exactlyÂ how big the derivatives bubble is, but low estimates place it at aroundÂ 600 trillion dollars and high estimates put it at around 1.5 quadrillion dollars.Â  Once that bubble pops there simply will not be enough money in the entire world to fix it.

#32 The U.S.Â governmentÂ is spendingÂ an amount of money equivalent to approximatelyÂ 25.4 percent of GDP this year.

#34 A 2006 Immigration and Customs Enforcement investigation discovered thatÂ 250 employees of the Defense Department used credit cards or PayPal to purchase images of children in sexual situations.Â  However,Â the investigation also found that the Pentagon investigated only a handful of those cases.

#35 According to aÂ recentÂ poll ofÂ Americans between the ages of 44 and 75, 61% said that running out money was their biggest fear. The remaining 39% thought death was scarier.

#36 Approximately 57 percent of Barack Obama’s 3.8 trillion dollar budget for 2011 consists of direct payments to individual Americans or is money that is spent on their behalf.

#37 A recent Department of Justice guide for investigators of criminal and extremist groups lists “constitutionalists” and “survivalists” alongside organizations like Al-Qaeda and the Aryan Brotherhood.

#38 The U.S. trade deficit has exploded to nightmarish proportions over the past two decades.Â  Every single month tens of billions more dollarsÂ goes out of the United States thanÂ comes into it.Â  Essentially, the United States is becoming far poorer as a nation each and every month.

#39 Factories are closing in droves across the United States because the American people would rather buy things made in China.

#40 Millions upon millions of good paying middle class jobsÂ are beingÂ shipped off to ChinaÂ and they are never coming back.Â  Meanwhile, U.S. politicians stand by idly and do nothing.

#41 Some analysts now believe that China could become the largest economy in the world by the year 2020.

#42 If the U.S. government was forced to useÂ GAAP accounting principles (like all publicly-traded corporations must), the annual U.S. government budget deficitÂ would be somewhere in the neighborhoodÂ ofÂ four to five trillion dollars.

#43 According to oneÂ recent survey, 28% of allÂ U.S. households have at least oneÂ person that isÂ currently searchingÂ for a full-time job.

#45 Major international organizations are actually proposing that the United States start considering the adoption of a trulyÂ global currency.

#46 Students at a high school in Missouri have built a car that they claim can get up to 450 miles per gallon.Â Â On another note, some of the topÂ energy experts in the world believe thatÂ thorium couldÂ solve our energy problems and supply very cheap energy for society for hundreds of thousands of years.Â  But in today’s world technologies such as these are endlessly suppressed by the rich and powerful.

#47 One Colorado high school studentÂ is seekingÂ an explanation from officials at his school afterÂ he was orderedÂ by security guards to remove American flags from his truck because they might make other students at the high schoolÂ “uncomfortable”.

#49 Memorial crosses erected along Utah public roads to honor fallen state troopers have been found unconstitutional by a federal appeals court and now must be removed permanently.

#50 One group of high school students made national headlines recently when they revealed that a security guard ordered themÂ to stop singing the national anthem during aÂ visit to the Lincoln Memorial.

This article was originally published at The Economic Collapse Blog