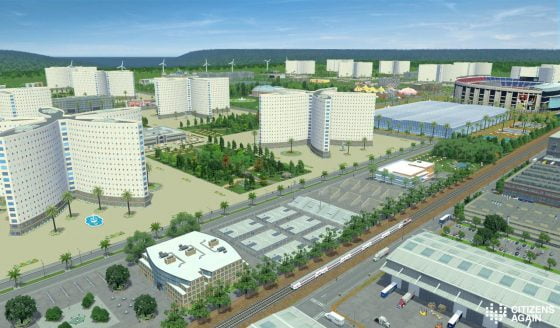 Ask any San Franciscan what the state of California has an excess of and the most likely answer will be homeless people (and their excrement, especially with the liberal mecca recording as many as 16,000 “feces complaints” in one week ). Actually, ask just about anyone and the answer will be the same: after all with 130,000 homeless, California is now home to more than a quarter of the nation’s homeless population.

That all may soon change, however, if a new crowdfunding effort succeeds in its effort to solve the US homeless crisis by building a 300-acre city open exclusively for those without a home. Daune Nason, founder of the Folsom-based Citizens Again, released details Thursday of his plans for an estimated $3 billion private city equipped with amenities and services for a 150,000 “high-needs” population, CBS LA reports.

“Qualified citizens” – those who meet as-yet-undisclosed criteria – will be allowed to live in the city and are free to leave whenever they wish, says Nason, who adds, “Some might want to stay forever.”

According to a press release, the all-inclusive city which hopes to overtake San Francisco as the mecca of America’s homeless will offer high-density housing in dormitories consisting of sleeping quarters and communal bathrooms with private showers. Additionally, residents would be provided RFID-enabled wristbands to be tracked constantly gain access to their dorm rooms as well as perform tasks such as job check-in, purchasing items with credits, medicine consumption, and more.

In describing his vision, Nason says that each of the four neighborhoods will have their own cafeteria and kitchen and multiple scheduled eating times to accommodate a 150,000-person population. And since the homeless are probably not best known for their ironclad work ethic, the neighborhoods will also be fitted with tiered seating for residents to watch TV in “a community setting” within their neighborhood.

According to the Citizens Again website, other aspects of the homeless city will include:

As part of his plans for the homeless mecca, Nason also envisions building underground tunnels by which deliveries can be made and city workers can commute to job sites in order to “minimize disruption of citizen life.” And when those living in the city are prepared to leave, they’ll be provided with job and life skills training along with counseling and therapy, Nason said although it was unclear if the tree will also be growing Magic Money Trees that fund all these lofty civic goals.

Or maybe it won’t be, and the whole homeless city “vision” is just a giant online fundraising scam.

Consider this woke, noble mission statement that Nason has proudly penned on his $50,000 gofundme campaign:

A new and unique solution for every chronic homeless adult is coming.

For decades, our government has been building small shelters all across America to house our chronic homeless. But at the current placement rate, it will take about 200 years to house them all.

It’s time to think differently: instead of building 4,000 more shelters, Citizens Again will build 1 city, catering towards America’s entire chronic adult homeless population. It will cost billions less than current efforts; be built in about 11 years; and the homeless will want to live there.

… and yet just a few lines below we read:

Launching a crowdfunding campaign during the holidays is not ideal, but I have no choice. By not taking a salary for the last few years, I have exhausted all financial means to get this project launched, and I am now many months behind on my mortgage payment and all bills, with no cash or credit left. Every donation – and clicking the share button – truly matters for this project, myself, my family, and eventually for the people I’m trying to help

How appropriate that one man’s noble “vision” for a homeless city is nothing more than a giant online panhandling campaign, one which has so far raised $570 of the $50,000 goal to make Nason’s life more palatable.

EDITOR’S NOTE: This sounds a lot like a prison for the homeless.  Controlled and monitored every second of every day for the “crime” of not being able to afford the policies of California’s ruling class.