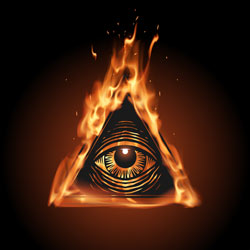 This report was originally published by Aaron and Melissa Dykes at Truth Stream Media. 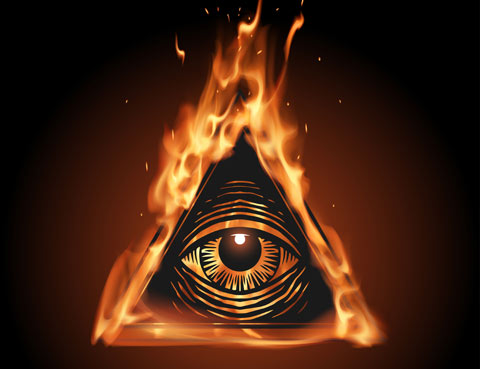 Of course, these days the concept of the Illuminati is much less a shadowy secret society bent on world domination than a cruel inside joke MTV has played out with borrowed symbolism.

But back in 1924, people were very worried about the Illuminati’s plans to take over the world by destroying it.

This article in the June 21, 1924 edition of the Joplin Globe laid bare the six “principles” or goals of the Illuminati:

Sixth, the abolition of the family relations. 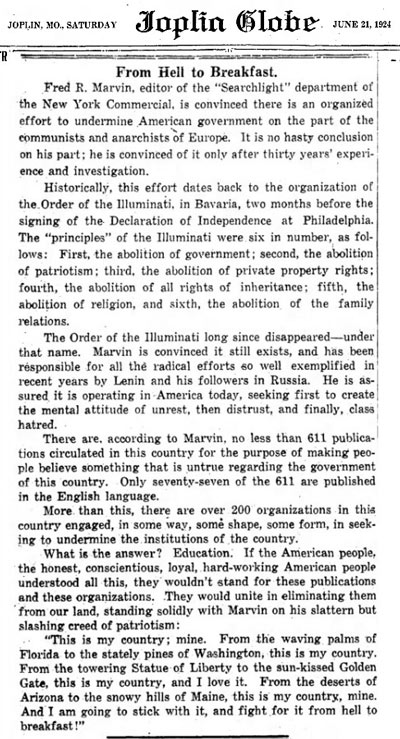 Marvin also notes that even though the order of the Illuminati had long since disappeared from public view by the 1920s, he was convinced it was alive and well and “responsible for all the radical efforts so well exemplified in recent years by Lenin and his followers in Russia”. The article goes on to spell it out:

“[Marvin] is assured it is operating in America today, seeking first to create mental attitude of unrest, then distrust, and finally, class hatred.”

In 1936, the Fred R. Marvin (1868-1939) mentioned by the Globe would go on to write Fools Gold: An Expose of Un-American Activities and Political Action in the United States Since 1860

(which listed him as the “Senator from Alaska” although he was not a Senator and he apparently wasn’t from Alaska either, plus Alaska didn’t even become a state officially until 1959).

The chain of custody for these covert actions lands back in the circle surrounding the likes of scheming and well-connected family dynasties such as Harriman, Bush, Dulles, Rockefeller, Rothschild and other fellow travelers, through covert financier-style foreign policy on behalf of the international banking circles to which they belong.

and perhaps also the Isaacson/Thomas book The Wise Men

for an unbelievable account of the behind the scenes power play by acting world architects in the lead up to and aftermath of WWII reordering.

The same characters built up other despotic regimes, not only during the 20th Century, but throughout their sordid and secret history, as with the Bavarian Illuminati

‘s sponsorship of the French Revolution

during which it worked to undermine the king and trampled over the masses of society.

The accounts are detailed, but can be traced through time to the order of men who today congregate at Davos, Bilderberg and above, well inside the ring of power of those orchestrating — if no longer in name, then at least in deeds — as the “Illuminati.”

But then again, there are many names; many of the groups are transient. It is a bit of a shell game, after all.

Now fast forward to today and take a look around. Notice anything…?