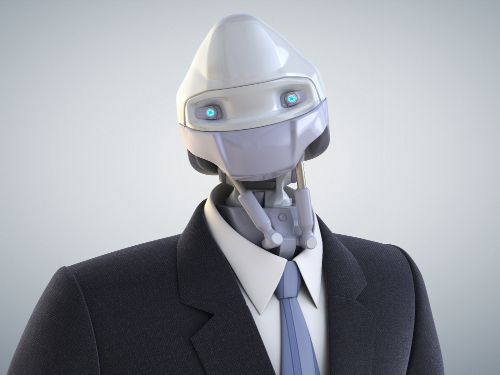 Editor’s Comment: So, let’s get this straight… for centuries, the upper classes have considered most of us to be useless eaters. Now, few of us will even be needed for our labor. What exactly will happen to us when they “officially” don’t need us anymore? Someone has already published a calculator estimating how likely it is that a robot will take your jobs… and the results aren’t pretty.

Will we become “pets” as Kurzweil, Kaczynski and Wozniak have predicted? Will we get to stay along just for the ride, or to see how weird it all has become? If so, government will presumably be providing welfare and amenities for nearly everyone… so what happens to our rights, our independence and our free will? The questions are many, and the answers hardly comforting… is the new boss the same as the old boss?

Hey Boss, The Robots Are Coming For Your Job Too

When most people think of automation, they tend to imagine low wage menial jobs being taken over by machines and computers. That may have been true in the past, but nowadays the robots are also gunning for your boss’s job. In fact, for some industries it’s the low wage tasks that still require human hands while mid-level positions are much more economical to automate.

At Hitachi, the Japanese electronics manufacturer, workers have started to take orders from artificial intelligence programs meant to increase productivity in the workplace.

Hitachi has deployed the AI in an unspecified number of warehouses, where it issues work orders and instructions to employees. The computer analyzes employees’ previous approaches to problems, and if an employee uses a new way to accomplish a job more efficiently, that technique is analyzed and used later on. This idea of kaizen, or constant improvement, is an often-repeated theme in Hitachi’s announcement of the AI system.

Rather than relying on preprogrammed instructions like other warehouse software, Hitachi claims that this AI can go off-script, adapting to on-site changes, weather patterns, and shifts in demand.

The company says productivity has already increased in the warehouse environment by 8 percent, compared to one of their non-AI run warehouses, and they hope to expand “human and AI cooperation.” Last month, they also announced a warehouse robot that picks up items twice as fast as other robots. It has two arms that operate independently, and is expected to be commercially available within 5 years.

While it seems that some low-level employees are only few years away from losing their jobs too, it’s interesting that in this particular case, the managerial positions were easier to automate first. And this isn’t as uncommon as you might think. There are plenty of mid-level jobs that a computer could do better than a person, which wasn’t typically the case in the past.

I’ve actually experienced this situation firsthand. Before I got into writing, I worked at the produce department of a grocery store. My job included stocking and trimming new shipments of produce, while discarding expired products. My manager’s duties mainly consisted of keeping track of what we had sold and thrown out, ordering new stock to replace what was lost, and anticipating what we might sell in the future.

Then the company decided to set up a computer system that would do the ordering for him. It was actually pretty terrible at its job, and frequently sent us much more produce then we would ever sell, or less than we needed. That was an everyday occurrence. In fact, the system didn’t replace his job. Rather than ordering new shipments, his job now consists of correcting the orders made by the computer.

He may not realize it, but he’s essentially training the computer to do his job for him. Those order corrections he makes everyday are probably stored on a hard drive somewhere, and someday a programmer will use that data to make a piece of software that will replace his job. His position will probably be eliminated before my job would be. I was getting paid $10.50 an hour to do tasks that would take a half a million dollar robot to do (at least for now), even though it was pretty menial. He was getting paid at least twice as much to do something that, while requiring more thought, will be easily done by cheap software in a few years.

If you have a steady job right now, you have to think long and hard about where that job will be in 10 or 20 years. Everyone who’s doing a cheap menial task should know by now that they could easily lose their job, but they’re not alone. If you’re in a mid to high level position in your company, don’t assume that you’re safe.

Just because you’re in charge of several employees, doesn’t mean that your job will remain relevant. Just because your position requires thought and intuition rather than physical repetition, doesn’t mean that a computer can’t do the same. And if you’re getting paid significantly more than your employees, there is an extra incentive to get rid of you. Truly, none of our jobs are safe at this point. Perhaps, not even my current writing job.

Will a Robot Take Your Job? This Calculator Estimates the Odds