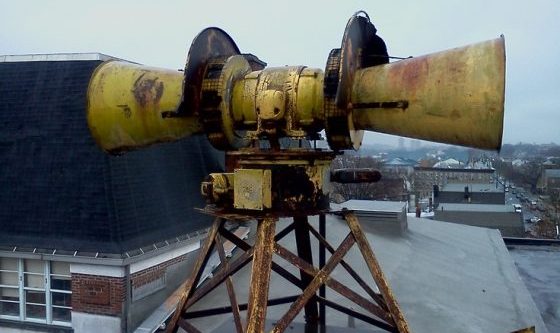 The previously retired air raid warning sirens from the Cold War era in Hawaii will be wailing again come December. Only this time, it’s due to the rising tensions between the United States and North Korea.

Hawaii has long been a military defense outpost sparking fears that North Korea could target the island. “I suppose that’s necessary as a precaution,” said Ted Tsukiyama, a Hawaiian resident, and WWII veteran. “But I don’t think North Korea is gonna attack,” Tsukiyama said. “They’d be foolish to threaten South Korea or Japan or the United States.”

But the concerns are growing as North Korean leader Kim Jong-un has repeatedly threatened to drop a bomb over the Pacific Ocean, and President Donald Trump has threatened North Korea with “fire and fury” and designated North Korea as a state sponsor of terrorism.  In turn, North Korea has continually failed to abide by the United Nations sanctions placed on them, as they advance their weapons of mass destruction.

Sirens were installed around Hawaii after the second world war started, according to Tsukiyama, and there would be periodic tests. “I remember hearing the sirens going off. The radio would give us a warning: ‘This is only a test, don’t get alarmed,’” said Tsukiyama, who was born and raised in Hawaii.

According to Vern Miyagi, administrator of the Hawaii Emergency Management Agency (HI-EMA), which is part of the state’s Department of Defense, the chances North Korea will act are unlikely, but making sure Hawaii is prepared is still vital.  “If North Korea launches against us or our allies, the retaliation would be complete and they would defeat North Korea’s ambition to continue its regime. The regime would probably end,” explained Miyagi. He notes Hawaii is protected under the U.S. Pacific Command’s defensive umbrella, the anti-ballistic missile system, and it is home to the Pacific Command, the military’s headquarters for the Asia-Pacific region.

Miyagi has pointed out that “Hawaii is a likely target because we’re closer to North Korea than most of the continental United States… As we track the news and see tests, both missile launches, and nuclear tests, it’s the elephant in the room. We can’t ignore it. People of Hawaii need to know what Hawaii is doing in preparation for this.”  Hawaii has been ramping up their preparations in advance for a potential nuclear attack by North Korea.

The Aloha State is currently attempting to educate its 1.4 million residents, as well as its visitors, on how to prepare for a nuclear attack.  Hawaii has become one of the first states in the nation to initiate a nuclear preparedness campaign and starting December 1, it will reinstate the “attack warning” siren, which it hasn’t tested since the Cold War. The siren will follow the monthly “attention alert” signal, which warns people of an incoming tsunami or hurricane.

The state has also been holding community meetings and broadcasting public service announcements on TV and the radio to prepare people for a possible attack.  Gone are the days of “duck and cover” during the Cold War; today, the mantra is “shelter in place,” preferably in a concrete structure. Officials also recommend having enough food and water to survive for 48 hours and being prepared with supplies to last up to 14 days.

If North Korea launches a missile, officials estimate it would only take 20 minutes to reach its destination.  It would take about five minutes for the United States government to determine where the missile is going, which would leave about 12 to 15 minutes to warn the public.