According to a new Bank of America survey, recession fears have jumped to all-time highs. A Bank of America Merrill Lynch (BAML) survey of United States credit investors found that the perceived probability of a recession in the next year spiked to 25%, its highest reading.

BAML’s survey found that recession risk is now the third-biggest concern for credit investors over geopolitical risk, just behind trade and China. It exceeded the record reached in July 2016 and marked an increase of 5 percentage points from last month’s survey.

According to a report by Business Insider, the top risks weighing on investors surveyed remained the trade war and China. Around 76% of investors said they expect a trade deal but not anytime soon, while 14% said they expect trade-war escalation. The fear of asset bubbles and a currency war also ticked up slightly in the latest survey. 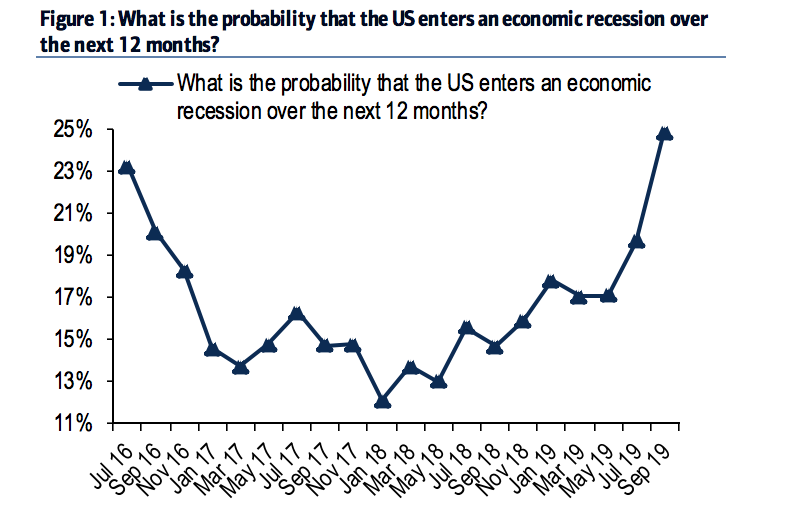 Investors across the board have grown increasingly worried that a recession is on the horizon. A survey last month found that more than 70% of economists think a recession will hit the US by the end of 2021, the Federal Reserve has signaled further rate cuts, and the inverted yield curve has flashed multiple warning signs about the state of the economy. –Business Insider

As far as the credit markets are concerned, investors are generally seeking higher-rated debt in the investment-grade and high-yield markets, BAML found. This means shunning the BBB-rated part of the debt market, which sits one step above junk status. Experts have been increasingly sounding the alarm on the group as it swells in size.

“In fairly dramatic fashion, high-grade investor sentiment on BBBs has soured to the point where only 33% expect outperformance on a risk-adjusted basis, down from 58% in July,” the team wrote.

Corporate debt is a big concern, as so many businesses struggle with being overleveraged.

In addition, high-yield cash levels are “off the charts,” the strategists wrote. More than half of high-yield investors reported having above-normal cash levels, up from 35% in July and marking the highest reading since April 2011.