This Border Wall Reduced Illegal Immigration By Over 99% 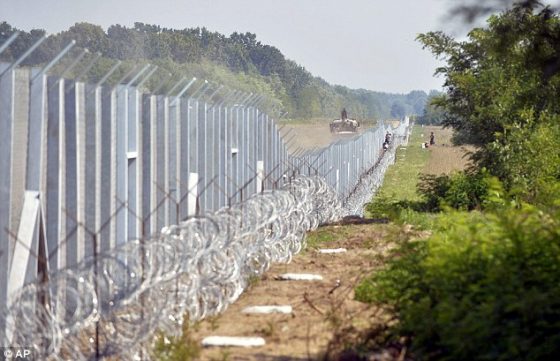 There is a border wall in existence that reduced illegal immigration by over 99%. Viktor Orban, the Prime Minister of Hungary put up a double fence along the border of his country with Serbia, and the results were staggering.

This tweet sums up the statistical data behind the wall and reduction in illegal immigration. However, somehow the debate over Donald Trump’s wall is still ongoing.

Recent Facebook ads assure social media users who support Trump’s wall that he will succeed at building it as promised during his campaign.

“There’s been a lot of noise and a lot of rumors,” reads the ad on Trump’s personal Facebook page. “WE WILL BUILD A WALL (NOT A FENCE) ALONG THE SOUTHERN BORDER OF THE UNITED STATES,” it adds, calling the issue “non-negotiable.”

As pointed out by Reason, discussions should be had about the cost and burden on the taxpayers because of the proposed wall. But setting the cost issue aside, as evidenced by the Hungary numbers, barriers actually do the heavy work of keeping people out. Hungary’s wall was built over two years ago, and the flood of people illegally entering the country has all but stopped.

Speaking on the second anniversary of the government’s move to seal Hungary’s border with Serbia — which is also an external border for the European Union — Prime Minister Viktor Orbán’s Chief Security Advisor György Bakondi announced that the fences have caused illegal immigration to collapse from 391,000 in 2015, to 18,236 in 2016, to just 1,184 in 2017.

“The system of technical barriers is the key to the success of border security, and without it, it would be impossible to stop the mass arrival of immigrants”, the security chief explained. –Hot Air

The simple statistics on the wall’s efficacy are staggering. In 2015 there were an estimated 390,000 illegal border crossings. So far this year that number is barely over one thousand. It’s hard to say that a barrier or wall won’t do the trick when it comes to stopping the flood of illegal immigrants. And the Prime Minister of Hungary is all too happy to do what’s best for his country.

Viktor Orban was originally told by the European Union that he couldn’t put the fence up in the first place. He proceeded to build it anyway, doubled its size, and then sent a bill for half the cost to the EU. It’s doubtful he’s expecting repayment, however, the little jab at the EU was probably payment enough. Then, when Angela Merkel announced that Hungary would have to stop defying the edicts of Brussels, he thanked her for her input and then basically told her to go pound sand. Orban has stood up to tyrants trying to tell him what to do for years, and his wall has proved all of them wrong.

This isn’t to say that we don’t face more challenges than Hungary. The United States has a much larger border and more variable terrain to cover. But the problem is not with engineering or the physics behind the building of a wall – it’s the politics.