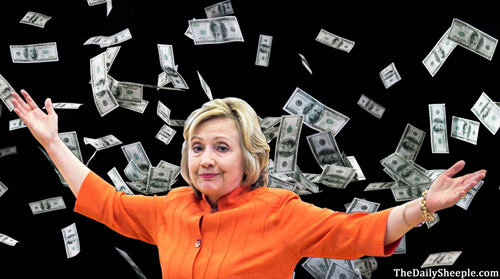 Hillary Clinton likes to talk a tough game about Russian President Vladimir Putin. And she likes to put him on the list of those at fault for her loss in the election last November to Donald Trump. But that didn’t stop her from inviting him and other top Russian officials to a Clinton Foundation gala right after she became Secretary of State.

While Democrats blast any Republican who has the nerve to even look Russia’s direction, Hillary and her minions in the Clinton Foundation were begging the Russians to come to an event put on by the “pay for play” organization.  Hillary offered political favors in exchange for money filtered through the Clinton Foundation.

On March 13, 2009, Desai emailed the list of invitations to Assistant Secretary of State Andrew Shapiro, who then forwarded the email to top Clinton aide, Jake Sullivan. This happened at approximately the same time that the newly appointed Clinton tried to “reset” U.S. relations with Russia. Yet, Donald Trump has been blasted for trying to do the same thing. The propaganda in the media is becoming clear as they continue to brush this story under the rug too.

Hillary Clinton repeatedly attacked Putin during her 2016 presidential campaign and often tried to link president Donald Trump to the Russian leader. Clinton and her staff, with help from Barack Obama and the media also allegedly concocted the “Russian hacking” narrative within 24-hours of her election defeat, as documented in the Clinton campaign tell-all book, Shattered: Inside Hillary Clinton’s Doomed Campaign:

That strategy had been set within twenty-four hours of her concession speech. Mook and Podesta assembled her communications team at the Brooklyn headquarters to engineer the case that the election wasn’t entirely on the up-and-up. For a couple of hours, with Shake Shack containers littering the room, they went over the script they would pitch to the press and the public. Already, Russian hacking was the centerpiece of the argument.

Clinton’s public display of contempt for Putin does not match her track record of how she interacted with the Russian leader in the past as controversy swirled following a uranium deal she approved while at the State Department. The deal was quickly followed by a massive donation to her foundation, proving the “pay for play” policy she herself used to become wealthy.