An Unexplained Light Flash Over Phoenix Was Captured On Security Cameras 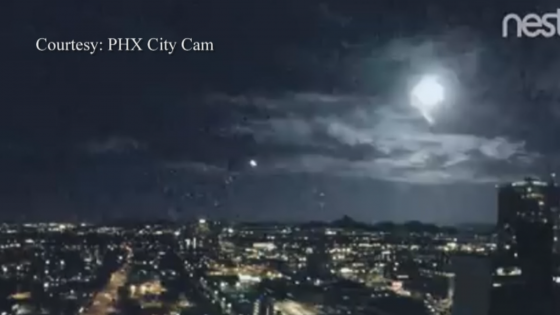 The remarkable bright object was spotted by numerous people in the area, with reports streaming in from Arizona and the surrounding states, including California, Nevada, Utah, and New Mexico.

“Subtle” would be far from the correct way to describe that bright flash of light streaking downward. But, based on the fact that it is “falling” from the sky, scientists say that it was more than likely nothing more than a big hunk of space junk burning up in the atmosphere.

But that didn’t stop people from taking to social media to share their experiences with the world. “Something BRILLIANT just flew across the Phoenix sky around 8:30 this evening!” the City of Phoenix, AZ tweeted last night.” Check out what our Phoenix City Cam Captured! Look to the right of this screen.”

Something BRILLIANT just flew across the Phoenix sky around 8:30 this evening! Check out what our Phoenix City Cam captured! Look to the right of this screen……#Meteor #Citycam #PHX pic.twitter.com/T3Zys30gXR

According to the American Meteor Society, this week alone has several sources of meteoric activity, leading to fireball sightings all around the world. In the span of just ten hours between November 14 and 15, there were four major sightings, with events in France and Germany, and two parts of the US. Some have suggested that the Taurid meteor shower, which peaked last weekend, may be to blame. But, as for the Arizona flash, the experts say this is not the case.

“Both branches of the Taurids are most notable for colorful fireballs and are often responsible for an increased number of fireball reports from September through November,” according to AMS. “The first analysis conducted by former IMO president Dr. Juergen Rendtel of the Leibniz-Institut für Astrophysik Potsdam from the raw data shows that the events that occurred over Arizona and France cannot be linked to the Taurids: the Arizona event was moving from North-West to South-East while the French event was moving from North-East to South-West.”

Instead, the Arizona fireball may have come from one of the other many meteor sources. The Leonid meteor shower, for example, is set to peak this weekend and has been active since the beginning of the month.

November is going to be an interesting month for those interested in celestial events. Go here for a rundown of what to expect in the second half of the month.