Got Gold? This Guy Just Grabbed “$1.6 Million Pot of Gold” From a Security Truck And Walked Off 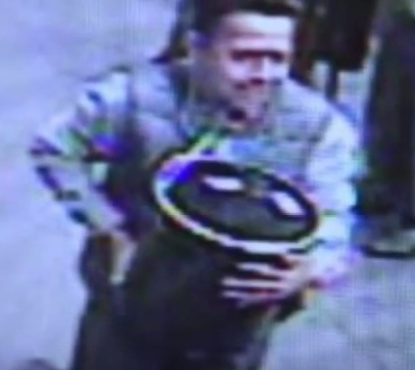 And when this guy saw a golden opportunity staring him in the face, he ran with it… and got away.

This man, who was caught on surveillance footage in New York, walked up to an armored truck and picked up an 86-pound pot of gold – literally.

He made off with a sealed five gallon bucket of gold flakes that is worth a reported $1.6 million – in what was perhaps the easiest heist in history.

Despite being identified on camera, police have yet to find the man several months later, but certainly would like to recover the gold.

The crime occurred in September but was only recently released by the NYPD. According to surveillance footage, the unidentified suspect was walking by the truck when he spotted the pail in the back and grabbed it.

Inside the 5-gallon container were gold flakes worth $1.6 million, the NYPD said in a press release.

The pail weighed 86 pounds, according to the NYPD. So, as the thief made his daring escape, he is seen on video being forced to take a rest.

It looks like the security detail was just standing around. People come and go everywhere, all the time in New York, and it doesn’t look like anyone paid him any mind.

By all appearance, he just casually walked off, and hit the jackpot – though the heavy bucket did compel him to take a rest.

Insert end of the rainbow pun here – because this might have been this guy’s one big shot at making it in this crazy world.

Guess he’ll be stocked and prepped to trade on the black and grey market during the next big crisis.

Gold Analyst Warns: “There Are About 325 Paper Ounces For Every Physical Ounce Backing It”

The World’s Purest Silver Producer Just Made A Stunning Forecast: Gold Could Go To $8000 Per Ounce, Silver To $200

The World Is Hoarding Gold: “This Was Just A Taste Of What’s To Come”