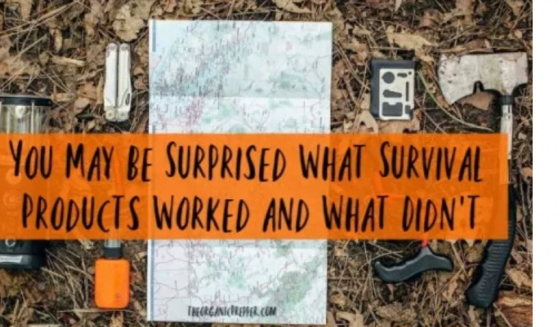 When I joined several ladies to take a survival course in Croatia back in May, we all brought the gear we felt we would need if a sudden Zombie Apocalypse arose and we had to get back home.

Some of that gear was fantastic. Some of it was terrible. And you might be surprised at what worked and what didn’t.

Now, for the products I didn’t like, I’m not going to name names and bash them. Simply because they didn’t work for us doesn’t mean they’re 100% garbage. I’ll just explain what I disliked about them and you can decide for yourself if that’s a problem you’d have also. You also have to consider that we were using this gear in a specific set of circumstances and your circumstances might be different.

As well, you may have far more experience than I and using these things might be a piece of cake. This article probably isn’t for you – it’s probably more for folks who aren’t big-time outdoor survival gurus.

I have carried around a Sawyer Mini for years and assumed that it would work well. I have used it when hiking and drinking water from a clear rushing stream. It worked just fine.

But on this trip, I used it to drink dirty puddle water and here I am, living to tell the tale. Did it taste like Evian water from the south shore of Lake Geneva, Switzerland? No, of course not. It was far from that rushing mountain stream water. But I lived and now I feel far more confident using my Sawyer Mini in less than desirable situations. I have felt worse drinking tap water in certain cities than I did drinking my filtered puddle water.  I had absolutely no negative effects from this and that water was muddy!

There are a million different tiny portable camp stoves out there in Prepperland. The one we were using was a metal stove that packed flat and assembled quickly. That was the easy part.

Tending a fire in the teeny tiny opening was ridiculous. I was on my hands and knees, cheek to the dirty ground, stoking a fire with a twig. While we did get the fire going and maintained it long enough to boil water, it was an epic pain and took longer than it should have. It would have been far easier to start a fire on the ground and put our cooking vessel on a couple of rocks or bricks. We would have boiled the water MUCH faster. Heaven help me if I had to actually cook a meal on it. I would have been laying on the ground shoving twigs into that tiny opening for an hour

The Jet Boil stoves were popular, effective, and practically smokeless, but they are limited because they only work with the fuel canisters. Portable camp stoves no longer have a place in my kit and more than one of us condemned ours to the junk heap.

One of our instructors, Toby, had a mess kit similar to this one. (I cannot vouch for that specific one – it’s an example to show you what the one I’m  talking about looked like.) If you are cooking with a makeshift stove of a couple of bricks or rocks, the oval shape meant that more of the water (or whatever you’re cooking) is exposed to direct heat than with a round cooking vessel.

If you’re worried about the fact that it is aluminum, keep in mind that this is not an everyday situation. This is something you’re using when you are on the move so you want your gear to be as light and efficient as possible.

I actually failed to bring a cooking vessel altogether, which would have been an awful mistake in a real emergency.

Generally, when we think about flashlights and headlamps, we think the brighter the better, right? Well, that’s not necessarily the case. One of the students discovered her ultra-bright lights were far too visible in the dark and the headlamp was so bright it blinded her partner.

A filtered light is far less obvious when you’re being stealthy. You can get headlamps as low as 160 Lumen and you can get flashlights with filters in various colors, which are good for signaling, or with lower brightness settings. You can also use a scarf or bandana to dim your flashlight a little if you need a moment of light to see where you’re going but you don’t want to alert the whole vicinity to your presence.

Most of us had never used a knife to strike a spark with a fire steel. One of the students had gone to a shop and asked specifically for a knife that would work with her fire steel. She tried and tried to start a fire with the knife she purchased, to no avail. It wouldn’t work for any of us, not even the instructor.

Why? Because it turned out that the knife she was using for it had a type of grind on the spine that made it virtually impossible to use as she wanted. Make sure well before you set off confidently into the forest that your knife and your fire steel are compatible.

Another student had a flint that turned out to be a crappy fake piece from China that didn’t work at all. Again – test it before you need it.

Sometimes we make things too complicated. In a survival situation, unless there’s some kind of extenuating circumstance that means you have to do things in the most difficult way possible, do things the easiest way possible.

I grabbed a few extra 99 cent lighters on my way to the airport to put in my luggage and used those exclusively for lighting fires during the course. Between that, twigs and branches I found on the ground, and a sheet of paper I ripped out of my notebook, a fire was mine within a minute in every situation I needed to light one. (I was also able to barter a lighter during the course because I had extras.)

Like most preppers, I have a massive stash of freeze-dried food put back for a rainy day. But if that rainy day happened to occur when I was cooking in less than ideal conditions and trying to be stealthy about it, a freeze-dried meal from any of the top sellers is not going to be my first choice.

First of all – you have to cook most of them for 10-20 minutes. That means you are going to have to find a whole bunch of fuel to keep your fire in the abandoned building/forest/wherever going for long enough to cook it. Secondly, cooking something for that long is going to produce some very noticeable smells and visible smoke.  Finally, particularly in a bug out situation, you might have to move fast. You might not have time to sit around for half an hour starting a fire and waiting for the food to cook.

Nearly every prepper I know has a bag or two of freeze-dried meals in their backpack. But as far as bug-out bags are concerned, I think no-cook portable foods like Clif bars, jerky, peanut M&Ms, trail mix, and fruit leather are better options.

After our first trip out to see the buildings where we’d be spending time, with all the debris and broken glass, I was super bummed that I had forgotten my sturdy work gloves. When we stopped at the grocery store, I went to the discount section looking for gloves. There were large men’s work gloves that would have been much too big and clumsy on my smaller hands. Then there were those cheapo little gardening gloves you see at every dollar store across the country in the spring – you know the ones with the sticky little rubber dots on the palms and fingers?

These worked ideally for nearly every situation that I needed them. I was able to move rubble, carefully pick up thorny branches for my fire, and strategically pick up big chunks of broken glass that were in my way. Obviously, these aren’t the sturdiest gloves around but used carefully, they worked for my purposes.

NOTE: The downside to my dollar store garden gloves? At night, the stark white of them made me stand out like some kind of mime in the forest.

We were out in the middle of an unfamiliar area when I was instructed to navigate to a different area. In the scenario, the bridge was out on the easy route, so I had to make an alternate route. Navigating when you can’t read the signs to figure out where you are is a whole new ballgame.

I needed a compass and I hadn’t brought a good one. However, somewhere in my backpack was a button one I’d tossed in that had come with some kit I’d purchased. I pulled it out to use it and got even more confused because based on where I’d calculated we were, the water that should be in front of us was actually behind us.

Toby pulled out a known compass that we were sure was working and it turned out that mine was off by nearly 60 degrees. That would certainly have been a navigational issue.

So really, this isn’t just button compasses. (Although mine was truly junk.) It’s any compass. Make sure before you need it that your compass reads true.

If you were actually bugging out through a potentially hostile area, you would want to be able to clearly see areas that you were planning to cross through or take shelter. Those nifty fold-up binoculars you get from camping stores (or Amazon) are well worth the price of admission.

Anything that enhances your senses is extremely useful when you’re trying to be stealthy. It can help you spot obstacles instead of you running right into them, and it can also help you to scope out a place in which you plan to take shelter to confirm whether or not it’s inhabited.

Have you ever tried any kind of conventional (or unconventional) prepper gear and been surprised by the results? Share what has worked for you and what has not in the comments section below.

Daisy Luther is the author of 4 best-selling books including Be Ready for Anything: How to Survive Tornadoes, Earthquakes, Pandemics, Mass Shootings, Nuclear Disasters, and Other Life-Threatening Events.