Why Most People Will Die in a Food Collapse: “6 Months to Make a Chicken Sandwich From Scratch” 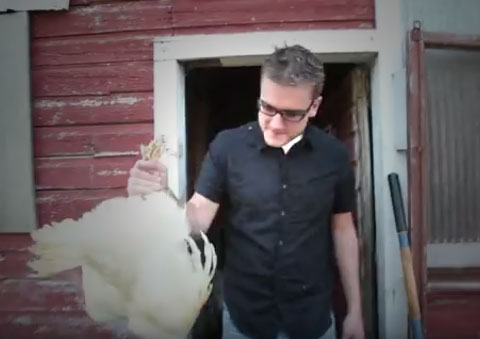 Are you ready… to kill and prepare your own food?

This article was written by Daniel Barker and originally posted at Natural News.com.

Editor’s Comment: Generally, preppers are getting ready for the worst outcome because they understand how fragile the system is, and how rapidly things will come undone. Most Americans have only 3 days of food (or less) in their pantries. If any number of crises hit this nation, and disrupted the food supply, the grocery store shelves would be empty in a matter of hours, and everyone left empty-handed would starve, or become absolutely and completely dependent upon the government from their spot in the local FEMA camps.

But that’s largely because people – transformed by modern technology – have become so completely disconnected from the food that keeps them alive that they don’t even know where it comes from, let alone how to make it. The How to Make Everything channel on YouTube shows how completely ridiculous it would be too make your own modest meal if you started from scratch. It took him 6 months to raise, grow and process everything for a chicken sandwich that might cost $2 or $3 dollars at the fast food joint around the corner. Of course, the homemade one would be more nutritious and sourced from clean food, but that’s not the point.

If you aren’t already raising your own food, and haven’t developed the skills to do so, then you likely have no idea how hard it is to do – especially in a crisis where your life depends upon it. As Daisy Luther recently discussed, if your prepping & survival plan includes homesteading, then you should have started yesterday or five years ago (but it’s not too late, though you’d better have some storable food to fall back on). It would be well worth it to become truly self-sufficient, or have a reliable network of local producers to trade with, but is much more involved than the peaceful and serene dream of getting back to the land would suggest.

Why most people will die in a food collapse: It takes six months just to make a chicken sandwich

A humorous video posted recently on YouTube is not only good for laughs, but also serves to illustrate the fact that self-reliant living is not as easy as some people might imagine.

In the video, which has already amassed over two million views, a guy named Taylor Lewin successfully makes a chicken sandwich from scratch — but it takes him six months and ends up costing around $1500 to produce.

Lewin has produced a series of videos showing how he takes ordinary items that we take for granted and attempts to make them from scratch. In the caption of the chicken sandwich video, he writes:

“I spent 6 months and $1500 to completely make a sandwich from scratch. Including growing my own vegetables, making my own salt from ocean water, milking a cow to make cheese, grinding my own flour from wheat, collecting my own honey and killing a chicken myself.”

The four-minute video is an edited version of a longer series that follows Lewin through the entire process, and although his efforts are indeed amusing to watch, the series also proves to be quite interesting and enlightening on several levels.

The “How to Make a Sandwich” series is made up of 11 chapters. In each of the videos, Lewin focuses on one aspect of the process — from making bread, cheese and honey, to raising and killing a chicken.

In the various chapters detailing the steps toward making his chicken sandwich from scratch, the viewer has a chance to learn something about each process as Lewin learns the skills for himself.

As he begins his journey, Lewin, like most Americans, has virtually no clue as to how to grow or prepare the ingredients he needs to make something we all typically consume on a near-daily basis.

As simple as a sandwich may look, a lot of work and expertise is involved in making one, and as Lewin points out in the first chapter, titled “Vegetables,” modern-day Americans have become almost completely uninvolved in the process of making the necessary ingredients.

As amusing and informative as Lewin’s videos are, there are deeper issues raised for those who have the inclination to contemplate such things.

For instance, if there were suddenly an economic collapse, or if the power grid were to fail due to a solar storm or EMP, how many of us would be able to survive — even if we had the resources at hand to do so?

The truth is, very few of us have either the resources or the knowledge required to survive more than a few weeks, at the most.

And although more and more people are making the effort to become self-reliant or at least stockpiling emergency supplies, the vast majority of Americans have done little or nothing at all to prepare themselves for an unpredictable, possibly cataclysmic event that many experts predict might happen in the near future.

I may sound like a broken record at times when I urge people to begin preparing for the unknown, but I hope that through sharing articles and content such as Lewin’s video series, at least some will begin to recognize the need to join the growing prepper movement.

It’s not so difficult or expensive to begin taking steps toward self-reliance, and much of the process is beneficial in both the short and the long-term — even if there proves to be no disaster, after all.

In fact, the path towards self-sufficiency is its own reward. For instance, learning how to grow your own food (which is really not so difficult, especially with a system such as the Food Rising Mini-Farm Grow Boxes) provides healthier and tastier meals while helping you save money on grocery bills.

And, of course, when the worst happens, the efforts you’ve made now might just prove to be the key to you and your family’s survival in the long run.