When Collapse Happens: “Everyone Took Everything. It Was Like A Storm…”

Editor’s Note: The following article has been generously contributed by Selco. He has experienced the ‘S’ hitting the fan for real, and lived through one year of hell during the Balkan war, where the only concern you had on a daily basis was surviving through to tomorrow. He has documented his experiences at his web site and in must-read articles like A Survival Q & A: Living Through SHTF In the Middle of A War Zone and Advice from a Collapse Survivor.

He currently offers his online course One Year In Hell to subscribers and provides a detailed account of his life in the middle of a war zone, what he did to survive when his city was cut off from the rest of the world by an occupying military force, and what you can do to prepare yourself physically and mentally for similar events should they come to pass.

Selco lives in the Balkan region and regularly shares his perspective on preparedness via his blog at SHTF School.

What Will People Need: Some Thoughts on Preparing for Bartering
by Selco 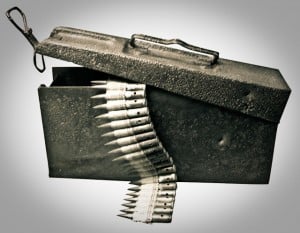 Buying stuff for your SHTF storage is good of course, and buying it the smart way so you can save some money is always welcome since most of us are not multimillionaires.

But have you ever thought about buying things for SHTF scenarios in some not so “regular” ways? It will save you money, but maybe even more important is that it will prepare you and show you how finding and buying stuff will probably look when the SHTF for real.

I am not advising you to do anything that might be against the law, I am simply gonna give you examples how I find some things. It is up to you how you or if you use any of it.

One of the most basic rules in preparing and acquiring things for SHTF is that you need to have it before you need it. You may think “oh, but it is so obvious.” Yes and no. Sometimes it is not. When SHTF you may find out that it is very important to have, for example, tetanus shots updated, but then it may be too late. You need to fix that before SHTF.

Simply, if you are going to look for the tetanus shots when SHTF, the price can be high. In every SHTF scenario anywhere in the world there is gonna be people who are gonna make a fortune and increase power by having the stuff that most of the other folks do not have, because it was not so obvious that it was going to be needed.

Things can be bought in many ways. Some of them are illegal so no advice, just examples.

I buy my fuel from guys who sell it not from the gas station, I buy it always from the same guys so in that way they do not find it useful to cross me with adding strange stuff inside in order to make more money. Repeat customer is good customer.

Where do they get it? I do not know, and I do not want to know. But some examples would be that they are just dealers for the big guy who wants to “go across” some tax expenses, or they buying it as “agricultural” fuel etc. I do not ask. Is it illegal? Yes. Have I seen and did worse things than that? Yea, sure. Survival.

Ways to buy things do not necessarily need to be illegal, but it can be just strange and something other than you are used to. In that way you are just preparing yourself for finding things when SHTF.

It’s like practice for getting things directly from people. Why not start now and tell neighbors what you can get for them cheaply and ask them if they have connection to some stuff too?

I know people in different areas of life. So I know guys from local politics and guys from local small gangs. I like to keep my ear on ground as part of preparation for coming SHTF. Money is short here and during the [Balkan] war people got used to getting stuff through other people, so the same system still works.

I also often trade for something when it makes sense. I use my preps and trade two pairs of police boots for new jacket, for example.

What things do I need?

Look around you and keep in mind when the SHTF, the term “useful thing” takes on a whole new meaning. You’ll see ( I did) that for some people it is a priority to loot malls and take a TV set, stereo or something similar.

I saw few guys in the first days of chaos rolling 4 new car tires from a looted mall. They were laughing, very happy because they thought they made good “deal” with that. I guess pretty soon they realized that those 4 tires were worth one pocket knife or something similar.

Smarter folks, or you can say people with “vision,” look for the weapons, food or similar useful stuff.

The important thing to understand is that everyone took everything. It was like a storm. As time passed by and when everything “more useful” was gone, people took everything else, like pieces of shelves where stuff was kept. People find uses for that too.

For example, when SHTF I expect people to smash parking machines for the money inside. I am not gonna care for the worthless coins inside, but those machines work thanks to a small solar panels installed on the pole above it. I would go for the panels that most of the folks won’t notice at all.

Small things were always useful to trade. Also some bigger “invented” things had a good price, like small wood stoves made from cans or pressure cookers. Pretty soon people who were skilled made good trade with handmade portable wood stoves.

Maybe you can find something to build with empty cans or other waste products?

People tried to trade everything so you could see some funny stuff too. I wrote in another post about the old FM radio taped to some huge batteries handmade from other sized batteries and taped together. Or homemade teas guaranteed to cure something mixed from different kind of plants.

Of course scams were everywhere and you needed to be very cautious.

What more you can do today

Of course preppers look for discounts and wholesale, yard sales and similar chances to save money. But you also need to think about practicing bargaining.

Also remember that buying things at the flea market (in your case maybe a yardsale or similar) is very good practice for trade in SHTF conditions simply because the act of negotiating is similar.

Prices are not fixed (they are more a thing of opportunity and skills). The way you look, act and talk can sometimes be more important than how much money (value) you have in your pocket.

Remember that when SHTF a lot of things can be valuable; things that you usually would not even notice in normal life.

For example when SHTF, batteries and candles had big value. The reasons are, of course, because people are still used to commodity of light at night, using it in every room etc.

But very soon folks realized that candles are something like luxury. So for example, if you wanted to read book you would read it by daylight, or people in the house simply gathered in one room under the light of one candle in order to spare the others.

So, the value of candles went high in beginning and then went down [as behavior changed].

So if you planned to make some big success with something for trade it can be said that you need to choose the correct time. Some things have the same high value almost all the time, like coffee or cigarettes.

Other things gain value over the time, multiple times [their original] value. Stuff like some seeds, plants and knowledge about plants like teas, and herbs for healing etc.

The point is, if you offered at the beginning stage of SHTF homemade teas as a remedies for something you would not have big success, because people did not believe that SHTF gonna last too long, or in other cases people still had some stash of antibiotics, painkillers etc.

After a few months passed and people realized the SHTF is gonna last for a longer period, and there were no doctors, no hospitals, and diseases were spreading, then of course those home made remedies suddenly became popular and at the same time much more expensive.

I have more examples about trading in my survival course.

So small things that are kinda ridiculously cheap in normal times and normal life become important, which equals expensive.

One more example would be flints for lighters.

Things like these are very important if you stash many things in order to do much trading to make life easier when SHTF.

Point is to carefully observe which things have what kind of value, and more importantly, what things have a chance to multiple their value in a few weeks or months.

I even knew guy who make small necklaces for luck, you know kinda of small metal on rope and if you carry that all the time you can be sure that bullet gonna miss you. He was something like a monk. He traded that for food and it worked.

When times are desperate people do and trust in lot of things.

This article has been made available by Selco of SHTF School.

Check out his One Year In Hell Online Course in which he provides a detailed account of his life in the middle of a war zone, what he did to survive when his city was cut off from the rest of the world by an occupying military force, and what you can do to prepare yourself physically and mentally for similar events should they come to pass.