What To Expect From The Government After The Collapse

The following excerpts have been graciously contributed by Fernando Ferfal Aguirre and were originally published in his highly rated book The Modern Survival Manual: Surviving The Economic Collapse. You may also visit his web site at The Modern Survivalist.

Editor’s Note: Ferfal’s first-hand experience following the collapse of the Argentine economy in 2001 is one that should be reviewed and contemplated by all those concerned with a similar outcome in the United States or Europe. From bank runs, crime waves, and food shortages, to restrictive government policies and corruption, Ferfal details what you can expect when the end of the world as we know it becomes reality. For many, especially those just beginning their preparations, reserve food, water, guns, ammunition and off-grid survival supplies are keystones for emergency and disaster preparedness. While these are absolutely essential to a well rounded SHTF plan, Ferfal further expands on traditional ideas by incorporating modern survival strategies, especially for those living in urban settings, including topics such as securing your shelter, risk assessments, riots and looting, defensive driving, weapons selection, knife fighting and self defense, post-collapse financial opportunities, bartering, and reality-based anecdotes.

He also includes discussions on how you can expect your local and central governments to respond when chaos reigns supreme, supply shortages leave tens of thousands without food in their bellies, and the value of your currency is equivalent to toilet paper.

In light of recent developments in the USA and Europe, which suggest that governments are not only aware of the near-term possibility of currency meltdown, bank runs, and widespread rioting, but that they are preparing response plans which may include deployment of military personnel and detainment of citizens, Ferfal has allowed us to reprint portions of the relevant discussions on this topic to help you better understand what to expect and how you can prepare for it.

Your Government After the Crisis 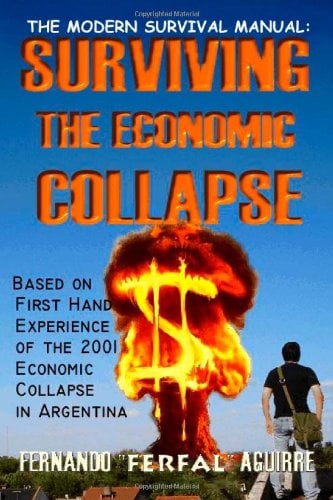 People want to believe in “change” or “hope” and thus grant him [The President] that power.

He promises he’ll use this power wisely and only for a little while. Like a little boy with a new toy, he promises to give it back soon. But that toy is SO nice, it makes everything easier for him and it feel so good to play with it…

In Argentina that toy was called the “super powers.” So-called emergency powers beyond the powers usually granted to a president by our Constitution.

Combine that with rampant corruption and placing puppet in the Senate and the Supreme Court, and governors in a few key provinces. A president in Argentina holds more power than a king of old Spain or England ever did.

And so freedom is lost and things become more “medieval,” as in the relationship between the king and the peasants.

“How does that reporter dare to criticize what I do? How dare the weak, whining opposition question my demands?”

Little by little, they get drunker with power and lose their perception of normal political reality until they no longer even bother covering things up.

…In Argentina, the official statistics managed by the INDEC are openly modified to fit whatever the president wants. 22% unemployment looks bad to our international investors, so a good patriot is expected to submit figures of 8% instead. That sounds much nicer. Besides, the worst the media can do is say it’s a lie. The “official” number is 8%, and some will call that figure bullshit…but it’s so much better than everyone having that 22% number in their heads.

Things reach a point where everything is bullshit.

What to Except From The Government After The Collapse

After an economic crisis and with a “benevolent” authoritarian figure in charge, you can expect the following:

Regarding how governments act when the SHTF, this book is arriving a bit to late in some regards for Americans. Some of the things I talk about are already happening and will have serious impact in the immediate future. There will be consequences that will last for years, maybe even decades.

These excerpts have been generously shared with our readers by Fernando Ferfal Aguirre and were originally published in his highly rated book The Modern Survival Manual: Surviving The Economic Collapse.