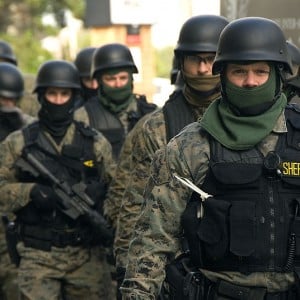 Editor’s Comment: Things are entering a desperate point of chaos. Student loan debt is one of Wall Street’s biggest bubbles, and could trigger market catastrophes. In the meantime, the outstanding $1 TRILLION in unpaid loans is up for grabs by private debt collectors, who’ve now teamed up with law enforcement to make a show of force during the bill collection operation.

Think it is intimidating to have armed police show up at your door, hauling you away and making you pay, or agree to pay? It is just the 21st Century version of debtor’s prisons, which are back in many forms, and are being used to squeeze on the little people, who must remember that they are owned. What’s the biggest lesson of all?

That college degree is worth about as much as an Obama buck in this carnival atmosphere – everybody’s got way too many of them, and they are no longer the key to opening doors to opportunity and success; instead they are the burden that is keeping people from getting ahead… all while the interest compounds, and the wolf comes to the door. Are you next? And are they insane?

Laws are effective only to the extent they are enforced. A law on the books has little impact if prosecution is highly unlikely.

The failure to punish big corporations or their executives when they break the law undermines the foundations of this great country: If justice means a prison sentence for a teenager who steals a car, but it means nothing more than a sideways glance at a CEO who quietly engineers the theft of billions of dollars, then the promise of equal justice under the law has turned into a lie. The failure to prosecute big, visible crimes has a corrosive effect on the fabric of democracy and our shared belief that we are all equal in the eyes of the law.

Under the current approach to enforcement, corporate criminals routinely escape meaningful prosecution for their misconduct. This is so despite the fact that the law is unambiguous: if a corporation has violated the law, individuals within the corporation must also have violated the law. If the corporation is subject to charges of wrongdoing, so are those in the corporation who planned, authorized or took the actions. But even in cases of flagrant corporate law breaking, federal law enforcement agencies – and particularly the Department of Justice (DOJ) – rarely seek prosecution of individuals. In fact, federal agencies rarely pursue convictions of either large corporations or their executives in a court of law. Instead, they agree to criminal and civil settlements with corporations that rarely require any admission of wrongdoing and they let the executives go free without any individual accountability.

What a cute little Banana Republic this America has become. Our government can’t put a single bank executive in jail for destroying the global economy, but when a mere peasant is caught not paying back his student debt, a team of U.S. Marshals arrive at his door to arrest him at gunpoint.

Land of the thief, home of the slave, indeed.

Believe it or not, the US Marshals Service in Houston is arresting people for not paying their outstanding federal student loans.

Paul Aker says he was arrested at his home last week for a $1500 federal student loan he received in 1987.

He says seven deputy US Marshals showed up at his home with guns and took him to federal court where he had to sign a payment plan for the 29-year-old school loan.

Green says as a result, those attorneys and debt collectors are getting judgements in federal court and asking judges to use the US Marshals Service to arrest those who have failed to pay their federal student loans.

Our reliable source with the US Marshal in Houston say Aker isn’t the first and won’t be the last.

They have to serve anywhere from 1200 to 1500 warrants to people who have failed to pay their federal student loans.