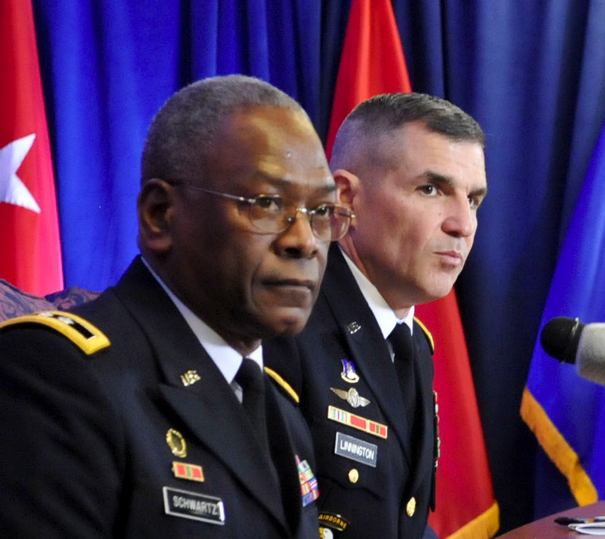 Editor’s Comment: In this unusual move, higher orders are forcing the highest ranking military officer over Washington, D.C. at exactly 12:01 am on the day of the inauguration. The officer, Maj. Gen. Schwartz was not given a reason, and one can only wonder whether or not it signals a potential coup or threat to the incoming administration.

Will there be a peaceful transition? What happens if martial law is declared due to riots at the inauguration, or an assassination attempt is made. There is no predicting what may happen, or what kind of danger this may mean for President-elect Trump, but his open conflict with the intelligence community and the ranking establishment figures in Washington the media present many flash points. Is it JFK all over again?

Though hopefully nothing at all will happen, this odd procedural move opens up a vulnerability at the swearing in, and raises difficult questions about who is loyal to whom, and who holds the real seat of power over this nation and its affairs. Stay vigilant, these may be dark times ahead.

“It doesn’t make sense to can the general in the middle of an active deployment,” rages D.C. Council Chairman Phil Mendelson (D) after Maj. Gen. Errol R. Schwartz, who heads the D.C. National Guard and is an integral part of overseeing the inauguration, has been ordered removed from command effective Jan. 20, 12:01 p.m., just as Donald Trump is sworn in as president.

As The Washington Post reports, Maj. Gen. Errol R. Schwartz’s departure will come in the midst of the presidential ceremony, classified as a national special security event — and while thousands of his troops are deployed to help protect the nation’s capital during an inauguration he has spent months helping to plan.

“The timing is extremely unusual,” Schwartz said in an interview Friday morning, confirming a memo announcing his ouster that was obtained by The Washington Post.

During the inauguration, Schwartz would command not only the members of the D.C. guard but also an additional 5,000 unarmed troops sent in from across the country to help. He also would oversee military air support protecting the nation’s capital during the inauguration.

“My troops will be on the street,” Schwartz, who turned 65 in October, said, “I’ll see them off but I won’t be able to welcome them back to the armory.” He said that he would “never plan to leave a mission in the middle of a battle.”

Schwartz, who was appointed to head the guard by President George W. Bush in 2008, maintained the position through President Obama’s two terms. He said his orders came from the Pentagon but that he doesn’t know who made the decision.

“It doesn’t make sense to can the general in the middle of an active deployment,” Mendelson said. He added that Schwartz’s sudden departure would be a long-term loss for the District. “He’s been really very good at working with the community and my impression was that he was good for the Guard.”

Unlike in states, where the governor appoints the National Guard commander, in the District that duty falls to the president.

Schwartz said that he has not been told why he was asked to step down. “I’m a soldier,” he said, noting that he was following orders and has no regrets. “I’m a presidential appointee, therefore the president has the power to remove me.”

Is this just another part of Obama’s “smooth” transition? Or is something even more sinister at work here, since we already know that anti-Trump activists are planning “the biggest protest in US history” on the day of the inauguration?

As we noted previously, radical leftists are planning to make January 20th the most chaotic Inauguration Day in American history.  Their stated goal is to “disrupt” the Inauguration festivities as much as possible, and they are planning a wide range of “actions” to achieve that stated goal.  Some of the more moderate groups are using terms such as “civil resistance” and “civil disobedience”, but others are openly talking about “blockades”, jumping barricades, throwing projectiles and “citywide paralysis”.  My hope is that all of their efforts will turn out to be a big flop, but it is important to understand that these groups are well funded, highly organized and extremely motivated.  The election of Donald Trump has been perhaps the single most galvanizing moment for the radical left in modern American history, and they are working very hard to turn January 20th into a major political statement.

In fact, just recently one activist group took out a full page ad in the New York Times…

Thousands of activists, journalists, scientists, entertainers, and other prominent voices took out a full-page call to action in the New York Times on Wednesday making clear their rejection of President-elect Donald Trump and Vice President-elect Mike Pence with the simple message: “No!”

“Stop the Trump/Pence regime before it starts! In the name of humanity we refuse to accept a fascist America!” the ad states, followed by a list of signatories that includes scholar Cornel West; author Alice Walker; Chase Iron Eyes of the Standing Rock Sioux; educator Bill Ayers; poet Saul Williams; CNN‘s Marc Lamont Hill; Carl Dix of the Communist Party USA; and numerous others.

The ad pointed people to refusefascism.org, and it asserted that Trump must be stopped whether he was legitimately elected or not…

Trump promises to inflict repression and suffering on people in this country, to deport millions, to increase violence up to the use of nuclear weapons on people across the globe, and to inflict catastrophes upon the planet itself. He has assembled a cabinet of Christian fundamentalist fanatics, war mongers, racists, science deniers. NO! His regime must not be allowed to consolidate. We REFUSE to accept a Fascist America!

If you go to refusefascism.org, you will discover that the protests that they are organizing in Washington D.C. will begin on January 14th.  They say that they want to “stop the Trump-Pence regime before it starts”, and they hope to have protests going “every day and every night” without interruption through at least January 20th.

Another group that plans to kick things off on January 14th is DisruptJ20.  Of course that is short for “Disrupt January 20th”.  If you go to their official website, you will find a long slate of events that have already been scheduled.

According to Legba Carrefour, a spokesperson for DisruptJ20, one of the goals of the group is to block major transportation routes into and throughout our nation’s capital.  And he is not shy about the fact that they literally want to “shut down the Inauguration”…

“We are planning to shut down the inauguration, that’s the short of it,” he says. “We’re pretty literal about that, we are trying to create citywide paralysis on a level that I don’t think has been seen in D.C. before. We’re trying to shut down pretty much every ingress into the city as well as every checkpoint around the actual inauguration parade route.”

If Carrefour and his fellow conspirators are able to actually accomplish that, it truly would be unprecedented.

And while DisruptJ20 is not publicly advocating violence, they are not exactly discouraging it either…

Carrefour says DisruptJ20 has no publicly announced plans to jump barricades along the inauguration parade route or throw projectiles at the new president, but that autonomous direct actions are encouraged.

“I can’t comment on specific stuff we’re doing like that, mostly because that would be illegal. But, yeah, it will get pretty crazy, I expect,” he says. “‘Have fun!’ I say.”

After the rioting that we have seen in Baltimore, Ferguson, Charlotte and many other communities around the nation in recent years, I hope that authorities are taking these threats quite seriously.

Once Donald Trump won the election, many conservatives seemed to think that the war was won.  But the truth of the matter is that many on the left were completely blindsided by Trump’s surprise victory, and now that they are fully awake they are gearing up for battle like never before.

And these protests are not going to end on January 20th.  In fact, abortion advocates are hoping to get close to a million women into Washington D.C. on the day following the Inauguration to protest for abortion rights.  Filmmaker Michael Moore is hoping that this march will be the beginning of “100 days of resistance” against Trump’s presidency…

Filmmaker and liberal icon Michael Moore has announced his plans to attend the Women’s March on Washington to protest Donald Trump’s inauguration later this month and has called for sore loser liberals to go further — by staging protests acts of resistance through the first 100 days of Trump’s presidency.

In an appearance, this weekend on MSNBC’s The Last Word, the 62-year-old Trumpland and Fahrenheit 9/11 director made a “call to arms” to those opposed to Trump’s presidency to join the Women’s March on Washington scheduled for January 21, the day after the presidential inauguration.

Of course it is easy to imagine how all of this could spiral wildly out of control.  If Trump cracks down on these protests really hard in an attempt to restore law and order, that could end up sparking a dramatic backlash against his “police state tactics”.  And if the protests become even bigger and more violent, Trump could respond by cracking down even more harshly.

Let us hope for some really cold weather in D.C. at the end of January so that as many troublemakers as possible get discouraged and stay home.  Violent protests, blockades and riots aren’t going to solve anything, and they could easily open fresh wounds in a nation that is becoming more divided with each passing day.