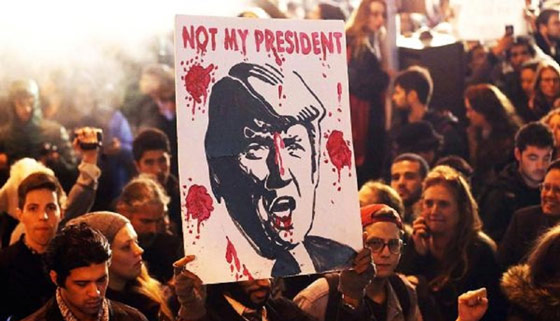 This article was written by Brandon Smith of Alt-Market.com and first published at PersonalLiberty.com.

Editor’s Comment: Perhaps it feels like the calm before the storm, but those with a careful eye surely see the pure chaos that is coming. Economically, politically, events are lining up for major clashes, severe downturns and wild card events that could bring American civilization to a grinding halt – or at least a temporary standstill.

The potential for clashes in the street – against pension cuts, or wars launched by the White House, or against the President himself  – could all unleash into complete civil unrest, and and could easily usher in martial law. There are thousands of professional protesters with no other objective that to cause trouble for the new administration; while the insiders in Trump’s cabinet could unleash hell anytime now. Will it be a stock market crash, combined with a severe Fed interest hike, and contracting credit? Will wars and rumors of wars bring new attacks upon America or its interests? How will President Trump respond, and how will events play out in the next 6 to 18 months? Stay vigilant, because no one knows the answer to that.

With Trump As President Prepping Is More Important Than Ever

I don’t believe it is as pervasive as certain people may think, but there is a notion among some in the liberty movement that with Donald Trump in the White House the need for crisis preparedness has subsided. Because preppers and survivalists tend to lean towards the conservative side of things, the urgency for prepping almost always explodes when the Democratic party is “in power.” As they say, for example, Barack Obama was perhaps the greatest gun salesman in history with the gun industry growing over 158% during his two terms.

Now with Republican dominance in Congress, Senate and White House, there is a possible temptation for conservatives to become complacent and comfortable once again. In 2017 so far, ATF background checks have dropped by at least half a million since this time last year, and gun company stocks are turning negative. There are also rumors floating around that survival food companies are suffering from a severe crunch in sales. Though I have not yet found this to be substantiated, I can verify that many preppers I deal with on a daily basis seem to have relaxed their guard.

I would point out that this is not necessarily all due to Trump. The gun market is likely saturated after eight years of Obama, and one must also consider that as the U.S. economy continues to decline, surplus cash used for prep gear is going to dry up. That said, I do think it is important to examine any assumptions liberty activists might have in terms of a Trump driven “recovery.”

When I began publishing my post-election analysis on what I felt was a predictable Trump win, I did find anger among some activists who decided I was being “too pessimistic,” and that I should join the movement in celebration. Being that I called a Trump presidency half a year in advance based on the premise that the globalists needed a conservative scapegoat for the next phase of the ongoing financial crisis, it was hardly a moment of celebration for me.

There is a common delusion among those that invest themselves in politics that all that is needed to reverse the course of any nation or situation is a “strong leader” with ample cheerleading from the populace. In reality, social and geopolitical disasters are usually far beyond the means of any one politician to change. Economic disasters are even more irreversible. I wish I could pretend to be optimistic, but I am rather well studied in the history of these kinds of events.

Conservatives are especially vulnerable to the idea of a “protector on a white horse” coming to their rescue; a God-fearing hero and statesman, a general and leader of men. But, such people do not exist. There are no supermen. There are no worldly saviors. There are only common men, with common failings, destined to face extraordinary obstacles. The great men of history are not born before hand — they are forged in the crucible of crisis. Great men are not great men until proven otherwise. To assume any political leader is a great man beforehand is foolish, to say the least.

This is why blind faith in a post-Trump renaissance is misplaced. It is something that has yet to be proven, and in the meantime, there are numerous and highly visible dangers on the horizon that demand continued vigilance and preparedness. I will examine one of these primary dangers now…

The Growing Threat Of Civil Unrest

As I noted in my post-election analysis, the political Left has been shell shocked by the rise of Trump and their emotional response would undoubtedly be to double down and become progressively more volatile and more violent. I predicted that this would be evident as winter broke and the cold weather subsided.

The first signs of this are surfacing as May Day is becoming a rally date for social justice mobs bent on disrupting any agenda the Trump administration might have for enforcing immigration laws. The largest of these protests is to be held in Los Angeles, but similar protests are planned nationwide as well.

From what we have seen from previous rallies, it would not be unfair to expect rioting in May. I say this because a tone shift in the left is taking place and extreme reactions are more frequent. The following video illustrates this clearly, I think…

In case you missed it, this guy just pulled an AR-15 on someone simply because they had a MAGA flag on their truck. Not only that, but he FILMED HIMSELF doing it and and apparently posted it on social media. That is how brazen and insane these people are becoming.

Think of it this way — could you have even imagined something like this happening during the 2012 election? It is important not to become conditioned to such behavior as being “normal.”

To be sure, this sort of thing will not be happening in certain parts of the country. In my state of Montana, the assailant would have been shot two dozen times over by our highly armed population regardless of his politics just on the self defense principle. And frankly, I am fine with that. Citizens providing security for citizens is the American way.

What I do have a problem with, though, is the increasing potential for an extreme response from conservatives in the face of leftist lunacy. Meaning, I worry about martial law with conservative support, which in my view is more and more likely over the next two years.

Preparedness in terms of self defense should be self-explanatory here. During widespread mob action the rule of law is usually the first casualty, even when martial law is instituted. You also never know when some nutcase might declare you a “Trump supporter” (whether you are one or not) as he reaches for a weapon.

It is fascinating to me the level of cognitive dissonance with some liberty activists who seem to think Trump’s first term will be anything other than pure chaos. George Soros, an elitist who often funds the very groups organizing mobs to protest Trump, said it plainly:

“I think Trump will fail.”

“What’s more Soros predicted that the market’s Trump high will soon turn into a hangover. He called Trump unpredictable and unprepared, and said that combination will end up bad for the market.”

Soros and his globalist colleagues do not need to field guesses; they ENGINEER the outcomes that they “predict.” Social unrest at this fragile time would result in the exact market instability Soros mentioned, among other problems.

Look, you may believe Trump is being threatened on all sides by the so-called “deep state,” or you may believe that he has willingly surrounded himself with global elitists because he is a Trojan horse. Either way, the diagnosis for the future is not rosy. It would be naive to think that the globalists would not do everything in their power to foment calamity in the near term. It would be equally naive to believe that such an agenda could be repelled through political means.

The answer, as always, is a prepared citizenry. This can act as a deterrent as much as a measure of comfort. The more prepared the public is for any eventuality, the less affected we will be by disaster. The less affected we are by disaster, the less fearful we will be when it strikes and the less likely we will be to make stupid decisions such as throwing our support behind martial law and the wholesale erasure of the constitution. The more prepared we are, the fewer options available to the establishment when attempting to lure us into poor collective decisions.

Prepping means freedom in the face of uncertainty, and times have never been more uncertain. To summarize: A Trump White House calls for more caution, not less.

This article was written by Brandon Smith of Alt-Market.com and first published at PersonalLiberty.com.