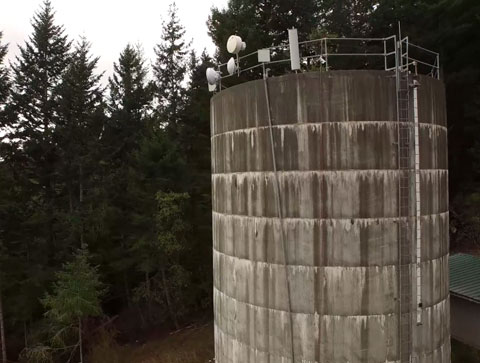 Editor’s Note: There are alternatives for off-the-grid and freedom-oriented individuals. Let us take the best of them, and create a buffer between the federal government and corporate structure that believes it owns us.

Better resilience in general will mean a softer blow when bad economic times, or worse, sweep over the nation. Being prepped and creating a vibrant community would pay off for those who can manage.

The following story exemplifies the human spirit at its best, and provides an example of the kinds of things communities can achieve when they bound together to overcome adversity. The sky really is the limit, and as Doe Bay Internet Users Association founder, Chris Sutton, defiantly proclaims:

I think relying on corporate America to come save us all is just not going to happen, but if we all get together and share our resources, communities can do this themselves and be more resilient.

Here are excerpts from the excellent ArsTechnica article, How a Group of Neighbors Created Their Own Internet Service:

When you live somewhere with slow and unreliable Internet access, it usually seems like there’s nothing to do but complain. And that’s exactly what residents of Orcas Island, one of the San Juan Islands in Washington state, were doing in late 2013. Faced with CenturyLink service that was slow and outage-prone, residents gathered at a community potluck and lamented their current connectivity.

“Everyone was asking, ‘what can we do?’” resident Chris Brems recalls. “Then [Chris] Sutton stands up and says, ‘Well, we can do it ourselves.’”

Doe Bay is a rural environment. It’s a place where people judge others by “what you can do,” according to Brems. The area’s residents, many farmers or ranchers, are largely accustomed to doing things for themselves. Sutton’s idea struck a chord. “A bunch of us finally just got fed up with waiting for CenturyLink or anybody else to come to our rescue,” Sutton told Ars.

Faced with a local ISP that couldn’t provide modern broadband, Orcas Island residents designed their ownnetwork and built it themselves. The nonprofit Doe Bay Internet Users Association (DBIUA), founded by Sutton, Brems, and a few friends, now provide Internet service to a portion of the island. It’s a wireless network with radios installed on trees and houses in the Doe Bay portion of Orcas Island. Those radios get signals from radios on top of a water tower, which in turn receive a signal from a microwave tower across the water in Mount Vernon, Washington.

Unlike many satellite and cellular networks, there is no monthly data cap for DBIUA users.

The DBIUA paid StarTouch Broadband Services about $11,000 to supply a microwave link from a tower on the mainland to a radio on top of Doe Bay’s water tower. The water tank, at about 50 feet, is the only structure that’s high enough to create a point-to-point link to the mainland. It is owned by the Doe Bay Water Users Association, which let DBIUA install the radios and other equipment.

Sutton and friends set up Ubiquiti radios throughout the area, on trees and on top of people’s houses, to get people online. Sutton used Google Earth to map out the paths over which wireless signals would travel, and then the team conducted on-the-ground surveys to determine whether one point could reach another.

There are now about 200 radios spread throughout the coverage area, and each homeowner who pays for service has a Wi-Fi router in the home to access the Internet.

In Germany, residents of a small town called Löwenstedt built their own Internet service. One Ars reader who lives in Norway personally installed fiber lines to his own property.

“There’s actually a thriving global network of community wireless initiatives—many of whom stay in regular touch and swap information on recent software advances, promising hardware, and innovative business models,” Sascha Meinrath, X-Lab founder and Penn State telecommunications professor, told Ars. There are such projects in Austria, Spain, and Greece, and another that serves tribal reservations outside San Diego, he noted.

I covered some of these in the 2013 post: Meet The Meshnet: A New Wave of Decentralized Internet Access

DBIUA spent about $25,000 in total to build the network, and an anonymous resident provided the money in a 3-year, interest-free loan. Residents paid $150 to become members of the DBIUA and $75 a month for Internet service, which goes toward paying down the loan. The monthly fees also cover the $900 a month DBIUA pays StarTouch for bandwidth.

DBIUA needed 25 customers to pay the bills and stay afloat. At 50 now, the organization is paying the loan off a bit more quickly. Sutton hopes to lower the monthly price residents pay after the loan is paid off.

This is such a wonderful example of what a community of people voluntarily working together to help one another can accomplish.

“We’re not making any money here, we’re just covering our costs,” Sutton said. Besides residents, DBIUA also provides Internet access to the water plant and the Doe Bay Resort. The water plant uses very little bandwidth, and the resort also has a fiber connection to OPALCO, he said. (DBIUA talked to OPALCO about purchasing fiber backhaul, but was unable to get wholesale rates, making it more economical to go with StarTouch, Sutton said.)

CenturyLink promised better speeds over the years “but that never came to fruition,” Sutton said. “Just waiting around for corporate America to come save us, we realized no one is going to come out here and make the kind of investment that’s needed for 200 people max.”

But overall, CenturyLink’s poor infrastructure in Doe Bay is reminiscent of AT&T, which has refused to hook up homes in certain DSL areas where it hasn’t invested sufficiently in network. CenturyLink has gone so far as to tell customers who cancel their DSL service that they will not be able to start it up again, Brems said. “CenturyLink said, ‘we’ll take it off, but you’re never going to get back on.’”

With all the success, people in other parts of Orcas have since asked Sutton to set up networks for them. “I’m like, ‘no, but I can tell you how to do it,’’’ he said. So although networks like DBIUA’s remain rare for now, Sutton believes it can be duplicated in more places than you’d expect.

“I think so many other communities could do this themselves,” he said. “There does require a little bit of technical expertise but it’s not something that people can’t learn. I think relying on corporate America to come save us all is just not going to happen, but if we all get together and share our resources, communities can do this themselves and be more resilient.”

Meet The Meshnet: A New Wave of Decentralized Internet Access

Meet FireChat – How Hong Kong Protesters are Communicating Without the Internet

The Rise of the Decentralized Web Continues