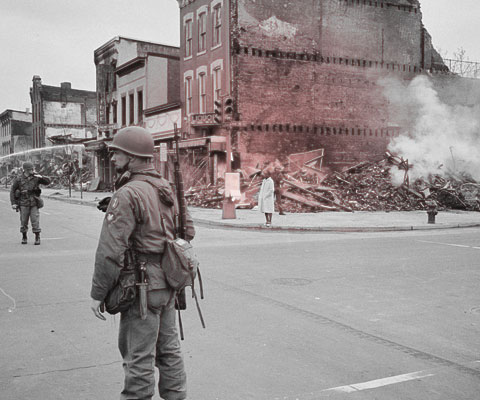 Back in 1967, National Guard and Army troops were deployed by Gov. Romney and LBJ to handle race riots in Detroit.

The worst unrest since the Civil War draft riots and until the 1992 Rodney King riots in L.A., chaos in Detroit resulted in 43 dead, 1,189 injured, over 7,200 arrests, and more than 2,000 buildings destroyed, according to Wikipedia.

Much of the disorder, which led to outright martial law, was captured by news cameras and remains available through archive film.

Take a look at just some of the disaster that was 1967 Detroit, and what could be played out again in Ferguson 2014:

The Anti-Media catalogued this, and several other incidents where martial law was implemented in recent decades.

Ultimately, order was only restored at the hands of the National Guard and military-style command-and-control structure.

This time in Ferguson, Gov. Jay Nixon has already preemptively ordered martial law in anticipation of the Darren Wilson grand jury decision and expected riots in protest of a decision not to prosecute the police officer who shot Michael Brown. Of course, riot police have already been used against sometimes violent protesters there since the August shooting incident.

How bad could things get? Take a look at some of the video from past cases where violence and unrest from the public was met with violence and strong-armed tactics by the National Guard, Army troops or police.

The Race Riots: During the 1960s, waves of protest swept the United States for a variety of reasons. The most prominent riots erupted largely due to African-­American frustrations with institutionalized racism, from economic inequality to police injustice. The riots were almost always inspired by relations with police, if not sparked directly by incidents of police abuse. In urban centers across the country, governments relied on armies of cops and the activation of thousands of National Guardsmen to shut down waves of often violent protest and looting.

Further, following the assassination of Dr. Martin Luther King in 1968 (which the FBI may have assisted), African-Americans were outraged and rioted again. This prompted activation of multiple state National Guards and amounted to thousands of troops per city, including Baltimore, Chicago, and Washington, D.C.

In the aftermath, riots erupted in some 125 U.S. cities. Two days after the April 4 assassination, Baltimore rioted for a full week, leading to National Guard, Maryland State Troops and a further request for federal troops:

The Anti-War Movement: In 1968, the trend of dissent against the state continued. This time, it was against the Vietnam War. The National Guard was activated in Chicago, Illinois to shut down protests at the Democratic National Convention, where scorned President Lyndon B. Johnson, had chosen not to seek re-election. Protesters (and eventually, rioters), were discontent with the corruption and warmongering of the leftist faction of the two-­party system and thousands took to the streets. In addition to thousands of police officers who instigated violence, the National Guard helped to put down the dissent and break up the protests.

The 1968 DNC convention riots were a show of extreme force and a media disaster for authorities, as Chicago Mayor Daley unleashed some 23,000 police and National Guard to meet an estimated 10,000 protesters. Police, accused of starting the riot, were witnessed beating a young boy waving a flag, and using an excessive amount of tear gas that ultimately disturbed presidential candidate Hubert Humphrey in a nearby hotel.

When that proved, unsurprisingly, to be a short-term solution, protests continued. Three years later at Kent State University, Ohio governor James Rhodes found it appropriate to summon nearly 1,000 National Guardsmen at yet another protest against the ongoing Vietnam War. In the now notorious stand-­off, four university students were murdered by the National Guard (who were called to “keep the peace in a protest for…peace). Eight more were wounded.  The Guard claimed they were returning fire, but no evidence supported that claim.

The Rodney King Riots: In April of 1992,­ police officers were acquitted of the brutal 1991 beating of intoxicated black motorist Rodney King in northern Los Angeles. The verdict defied video evidence and riots broke out across Los Angeles. Nearly 10,000 National Guard troops were called upon to stop the riots and looting. This proved that the government’s tactic of sending in troops to stop violent protests (precipitated by violence and racism by the government) as it had in the 1960s had failed. It also proved that the state refused to learn its lesson.

While there are definitely significant threats to social order that may justify the presence of National Guard and riot police in these past cases, and today in Ferguson, their presence underscores the disconnect between the people of society, who feel pushed into response, and the enforcers/rulers of society, who feel pushed into control and force:

Clearly, governments have a tendency to call in the National Guard when “order” is disturbed.

Even more so, the National Guard is deemed necessary when the people revolt against oppressive treatment from government. Though riots and violence are never preferable, calling in the National Guard to treat symptoms of underlying abuse is like prescribing pills to treat disease without examining diet or lifestyle.

To be clear, the National Guard is often called in when violence erupts, but while it may be effective at stopping that superficial violence (by threatening or using violence), it reliably provides an excuse for the government to ignore the original reasons for that “unrest.”

Regardless, calling troops in signals that the government has no desire to accommodate the people. Rather, it would prefer to continue perpetuating the problems that led them to summon the Guard in the first place.

For those who want to prepare for possible breakdowns in civil order and any other contingencies that may come up, consider these resources:

RESOURCES:
Officials Warn:  “Make Sure You Are Prepared for a Period of Disruption” Before Michael Brown Decision