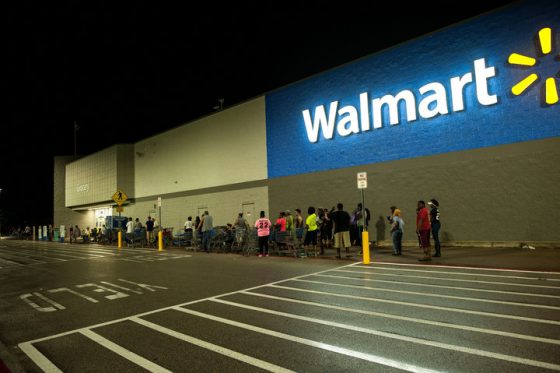 People begin lining up at a closed Wal-Mart store in Beaumont, TX at around 2:30 Thursday morning after hearing the water supply for the city had failed.

The city of Beaumont, Texas is now in crisis mode after losing their water supply indefinitely.  Residents in desperate need of clean water lined up outside of a Wal-Mart in hopes of buying bottled water, now worth its weight in gold.

Residents in an Eastern Texas city are now hoping that they can buy the water they need. The main municipal water pumps have now failed due to flooding, and there is no estimated time for repairs. Beaumont received 26 inches of rain on Tuesday, which is a city record for the most rainfall in a single day, according to the National Weather Service.

Beaumont, which boasts a population of over 100,000 people, lost both its main and secondary water supplies on Wednesday. Hurricane Harvey‘s excessive rainfall caused the Neches River to overflow, which damaged the city’s water pumps, according to city officials. The city’s secondary water source, which is located at the Loeb wells in Hardin County, is also offline.

City government officials say that the outage is indefinite as they must inspect the damaged pumps first before repairs can even begin.  There’s no way to inspect the damages either until the water resides. Government officials did give city residents a little warning that they would lose access to clean water. Residents were urged to fill up their bathtubs with water, as the city water system was expected to lose pressure early Thursday. But some residents still ran out of clean water and many were lined up outside local stores overnight hoping to buy bottles of water.

A young mother even said that the city’s inability to supply residents with water was putting her young baby at risk. Jennifer England said, “I stopped to get water because I have a baby who is sick and I need to flush his tube,” she said. “I just needed to get some water and leave, because we are in a hurry. We want to get out before the water rises again. The police officer came here and stopped everyone. I desperately need water for my baby, but they would not give me any.”

Around 2:30 a.m., a crowd of people outside the Speedy Stop convenience store attempted to pick up some of the water bottle cases left outside the closed shop. A policeman intervened, telling HuffPost, “I’m not going to let people just take water. I know we’re in a scary situation, but I had to tell them to stop.”

“Several cars pulled off with water and that’s fine, but we can’t just let everyone load up what they want,” said the officer, who identified himself as Joe Marlboro. “We’re not going to arrest anyone as we’re in a dire situation, but at the end of the day we have to have order and we can’t let them take the water.”  –Huffington Post

Sixty-seven-year-old Norris (who didn’t want to give his last name), argued that he wasn’t trying to steal the water. “We’re not trying to take advantage, but when the news tells you to get out of the city because they don’t know when the water will be fixed, what are people to do? I plan to pay the store for the water. I wasn’t just going to take it,” he said. “We’re isolated here. We may not be able to get water anytime soon, so that’s the situation here.”

The Speedy Stop convenience store’s manager, Ronnie Miller, told HuffPost that he hasn’t been able to open the shop because there’s no running water in the bathroom, a health code [governmental bureaucratic] requirement. He also said, “We don’t really have much water to give.”

The Huffington Post assures readers that government officials and FEMA are working to resolve these issues.