Stealth Fire: How to Build a Concealed Campfire, and Other Tricks to “Stay Invisible” 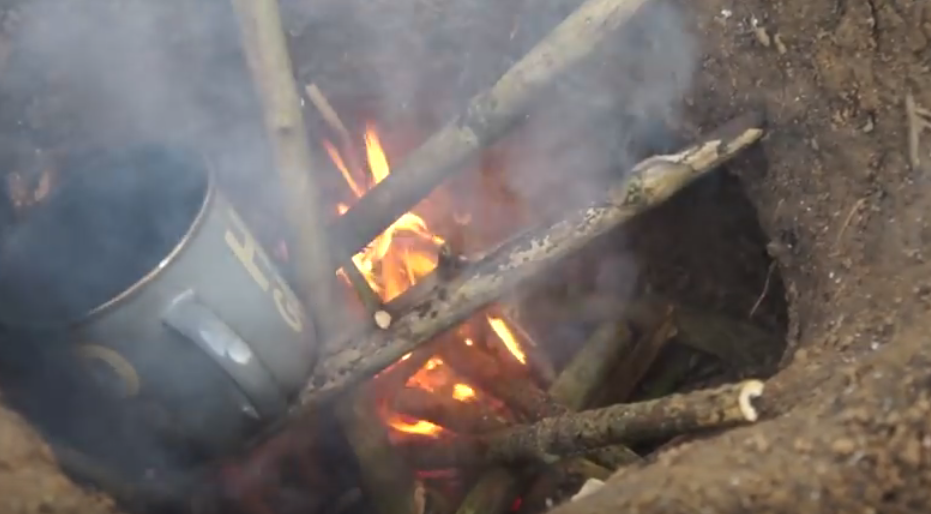 On the run? Have you been labeled a target?

Maybe an operative for Russia because you didn’t support Hillary during the last election?

Perhaps you have been driven into bankruptcy and off your property, and must live off the land in some capacity. Perhaps you don’t want to draw looters or predatory opportunists to your camp.

In a worst case scenario, there could be martial law, or even a civil war in the country.

It is really difficult to know what could be coming down the road ahead, or how dark times may get. What if you can’t stay on the right side of the law in a future regime, despite having done nothing wrong?

Regardless of the situation, if you are surviving, escaping or simply trying to minimize your footprint while living off grid, you will probably still need fire or heat of some kind for cooking and for warmth. But that fire could give you away.

However, there’s a way that you can maximize the benefits of fire, man’s most basic technology, and remain low key and undetected in the surrounding area.

It is the Dakota Fire Pit technique – basic knowledge for many soldiers, and a good tip for survivalists and camping enthusiasts alike.

WHY THE DAKOTA FIRE PIT?

First off, the Dakota fire pit is the only option for staying tactical.  It’s the only campfire you can build where the flames remain invisible.  Also, the fire burns so hot that it reduces the smoke output, which is optimal for avoiding detection.

The fire remains hot and burns steadily because of the chimney and airway tunnel.  When the fire burns in the main pit it forces all of the hot air out the chimney, allowing no air in from that hole.  The resulting effect is that it creates a suction-like action that forces fresh air down the airway tunnel to the fire base, feeding the fire with plenty of oxygen.

The Dakota fire hole is also your best option to avoid detection from enemy personnel.  The flames are hidden below ground, and the fire burns hotter, producing less smoke for enemy eyes.An underground fireplace is the absolute best tactical option, especially at night— you never know if an insurgent might possess night vision capabilities.  Concealment is a soldier’s best friend (right next to his weapon).

This fire pit is not only for military personnel, but also for anyone looking to build a decent or concealed campfire. It’s great for any environment, jungle or desert, except maybe Antarctica or Alaska.

The Dakota fire hole is your best option when the enemy is close by, but it’s also good for areas near dense population. Locals always seem to pop up in the strangest places!

There are drawings and diagrams that show you how to construct this ingenious yet simple fire pit.

But it doesn’t seem to be of too much importance how perfectly it is proportioned… the basic design will accommodate even the crudest build of it, as long as it has a secondary tunneled-hole to feed the fire oxygen. 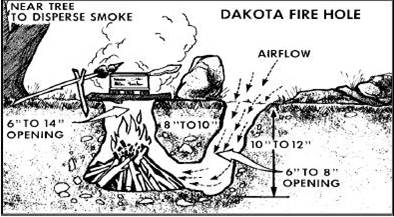 More generally, this important practice goes with the idea of laying low and camping in a “leave no trace, be no trace” fashion.

Blending in, going “grey” around other members of the public, and getting in, out and setting up camp without being noticed.

Clearly, it is a mix of carefully-crafted technique, and the art of stealth.

The Prepper’s Blueprint: The Step-by-Step Guide to Prepare You For Any Disaster