Prepare to Defend Yourself with Extreme Brutality

One minute your minding your own business walking out of the grocery store, the next minute you’re confronted by an individual or individuals who would do you harm. Are you mentality and physically prepared to act quickly and without remorse?

Most of our readers will never go out into public seeking a confrontation. But there is no doubt that trouble will find some of us. Take, for example, Mark LaVelle, a suburban dad and father of four, who was recently attacked by a mob that kicked in his door and beat him while his wife and kids watched and listened from the second floor of their home. He and his family were at the mercy of their attackers:

ABOUT 11 P.M. on Sept. 9, dozens of youths with bats and pipes descended on a tidy residential area of Port Richmond looking for white teens who allegedly had attacked an African-American kid at Stokely Playground a couple of hours earlier.

Two fearful white teens spotted Mark LaVelle on Indiana Avenue near Belgrade Street and asked for help. Suddenly, the mob appeared. LaVelle, who said that he didn’t know the two kids, who looked to be 13 or 14, ran with them into his nearby house.

” ‘We got you, you white mother——-!’ ” LaVelle said he heard someone yell in the “mob” of black and Hispanic youths.

With the two teens hiding in the house, LaVelle, 5 feet 10, 220 pounds, a well-known sports-league organizer and coach in the community, went outside to try to calm the angry mob.

They were standing on his steps. One shouted, ” ‘Something’s going to happen now!’ ”

But the attackers pounded on his front windows and kicked his wooden door so hard, it flew open and some of them entered his house.

“The first guy hits me with a pipe. The second guy knocks me in the face. All I’m hearing is my wife and kids screaming,” said LaVelle, who feared that the next time they saw him, he would be in a casket.

He said that he was able to push the attackers out the door, but then a third man – who had a gun – tried to extend his arm. LaVelle grabbed onto the gunman’s lower arm and shoulder so he couldn’t raise the weapon. Then, police sirens screamed in the neighborhood, and the mob turned and ran.

Mr. LaVelle’s experience should be a warning to us all. You may not be looking for it, but sometimes trouble will find you. If you are not prepared to deal with it, then there is a distinct possibility that you’ll end up in a casket, as LaVelle feared when he was being attacked.

To be sure, Mr. LaVelle made a mistake in the heat of the moment by trying to quell the crowd when emergency responders had been called and were on their way. Unless the police are unavailable due to wide spread chaos, there is no reason you should attempt to confront a mob of rabid dogs while your defenseless family is in your home.

Nonetheless, this situation and the many other similar instances we’ve be exposed to over our lifetimes are proof positive that if you’re not readily assessing threats around you it could prove fatal.

In his Spring 2011 Trends Journal trend forecaster Gerald Celente provides subscribers some key insights in Mental Conditioning for Self-Defense, Security, and Survival from his long-time self defense trainer Bradley J. Steiner. Among a host of fantastic self defense tips, Professor Steiner discusses the “combat color code” – something we strongly urge you to implement in your daily routine, especially when out in public venues. While some might call it paranoid, we suggest that paranoia is a self defense mechanism, and Professor Steiner’s combat color code will help to put threats into perspective, which helps to reduce stress, anxiety and fear because your aware of your surroundings:

You must be attack minded. This means always being prepared for the moment when you need to attack. There is a practical “combat color code” that helps develop the habit of setting the mind. Colors easily allow you to remember where on the scale of awareness you should be.

WHITE: Unready. Unprepared. Avoid being “mentally in white,” except when you are in a place that is entirely under your control, and you are with people you know and trust.

YELLOW: Relaxed and alert. This means that whenever you are out and about in the world, you are always aware and alert to what is going on around you, and to anyone who is physically near you. (Try this next time you’re outfor a walk or in the supermarket. Staying aware and alert is much more difficult than you might imagine.) Commit to living in “Yellow.”

ORANGE: Alarm. In Yellow you say to yourself: “This fellow is approaching me”; in Orange you say: “I may have to take this guy off the count.” In Orange you are ready to go! Your physical demeanor does not change, and thus you provoke and telegraph nothing. But you’ve set yourself so that any indication of physical violence will trip your wire, and you will snap into . . .

RED: Attack! And this is exactly what you do. The danger is clear and imminent, and you go.

99.9% of the time you will be in the white, yellow or orange color code levels. But once you’ve determined a Red Alert scenario – and it will likely happen automatically within a very short time frame measured in milliseconds  – there should be no stopping you.

Once the conflict turns red, all bets are off and you must act with speed, confidence, efficiency and extreme brutality.

The only way you’ll be able to achieve this is with the proper training, not just at your local gun range or karate dojo, but through personal examination and “war-gaming” of scenarios. Professor Steiner continues:

Training your psyche as well as your body to deal with emergencies is certainly the best and perhaps the only effective way to prepare for the looming global socio-economicturmoil. Acquiring the confidence that accompanies survival skills allows you to protect your loved ones, as well.

There is a saying that “toughtimes never last, but tough people do.” Too many think that “tough” means merely physically tough. That is just a part of it. Often, in adult life, the mentally toughest win — even in a physical fight. And there can be no doubt that when confronting and preparing for hard times there is very little that will assist you more than conditioning your mind for serious combat — acquiring the warrior’s mindset. Even if you never have to use it! Young and old possess the potential to learn enough to adequately defend themselves. Women may not be as strong as men, but through proper training they can acquire the capacity to disable a much larger and stronger attacker. No one need be an expert, and no one needs to be in his or her physical prime in order to be able to protect himself in an emergency.

You must assume that any attack on your person or your family is unpredictable. You have no way of knowing the intentions of the person who has chosen to be aggressive and physically confront you. Are they intending to just push you? Punch you? Kill you? Always assume the worst case scenario, and as such, respond in kind. Anyone who is willing to aggressively attack you without provocation must be assumed to be mentally unstable and capable of going all the way. You must be willing to go all the way as well.

One key point we want to make is that when engaged in a confrontation of this nature, you can no longer act defensively. You must, at this point, become the attacker.

If you have a concealed firearm, use it. If no firearm is available, use any weapon that is available – a stick, rock, bottle, lamp, keys, even a rolled up newspaper – because it is better to attack with a weapon than to fight empty handed. As Professor Steiner suggests, you should only resort to fighting with your feet and hands if those are the only weapons you have available. 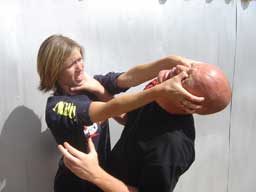 But if you happen to only have hands and feet when the confrontation starts you need to be thinking in terms of maximum damage – gouge eyes, tear ears, rip hair, hyper-extend a knee with below-the-waist kicks, break an elbow, spear hand attacks to the neck – essentially utilizing any technique that will rapidly disable the enemy with the most crushing blow available. Keep in mind you may be dealing with multiple attackers, so you will need to act fast as you shift from one threat to the next, so each strike should be measured and targeted at vital areas.

All rules should go out the window in a self defense situation. Here’s an example:

Police say a woman had just finished praying at St. John’s Church at Atlantic Street when she was approached by a man Thursday night while exiting out a side door.

Stamford police captain Richie Conklin says the man asked if he could hug the woman.
When she said no, he allegedly knocked her down and then grabbed and attempted to rape her.

“During that attack, he stuck his tongue into her mouth and she bit off a large portion of his tongue, which we recovered at the crime scene,” said Conklin. “There was an extreme amount of blood at the scene.”

Conklin says it was a big chunk.

The attacker was nabbed by police when he turned up seeking medical aid at a walk-in clinic in Stamford.

One thing is for sure – the attacker never saw it coming. Brutal. Effective. Life saving.

While having the right mindset is certainly important, it wouldn’t hurt to acquire training in the weapons mentioned above (including your hands and feet!). Head to the range regularly because shooting accuracy is a depreciating skill. Spending one to two hours weekly in a self defense class utilizing weapons training, as well as open hand techniques, will certainly increase your chances of survival during a confrontation. One recommendation in this regard is to seek out true self defense classes, as opposed to “sport” style fighting. You are not interested in scoring points in a competition. What you want is “battlefield application” – the kind of techniques that have been tried, tested and survived for centuries on battlefields throughout the world.

Above all, be prepared to face brutality by responding in kind – with overwhelming brutality that will surprise, disarm and neutralize the threat with extreme prejudice. You must be ready to take it all the way – your life and the safety of your family may depend on it.