Pensions Will Be Wiped Out In America: “Perfectly Primed For the Greatest Financial Disaster” 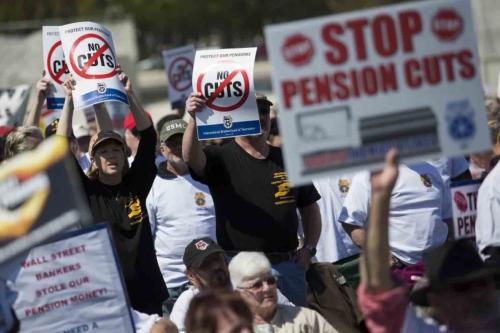 This article was written by Michael Snyder and originally published at the Economic Crisis blog.

Editor’s Comment: The problem with waiting for a gigantic disaster to unfold is witnessing how thoroughly wired for demolition the whole thing is. The set up has been precise, even if ugly and basal in its fall. The Federal Reserve has long fed or starved panic and disaster with its creation of money, with the pumping of the prime, or the contraction of money supply. Now, after 8 years of Obama and a “recovery” from the 2008 economic crisis that has been based around unlimited liquidity, a major hot potato has been passed around for all those drenched in debt, and dependent upon a system that works.

Public pensions systems are the god-awful nightmare in the basement that threatens to make any such crisis – perhaps initially centered only around Wall Street behaviors – much, much worse by scale. Rather than lock boxes, they have become heavy-abused IOUs cash stashes, and in the most recent decades, these ‘vehicles’ for pay-it-later investing have been tossed around by private equity firms. They are agents for attempting to grow pension values on the open market, but they are also vulnerable as a carcass of ill-guarded funds that are easily spent on risky investments, and there to take the loss, while those who’ve done the betting once again go on the run.

Are millions of Americans about to see the big, juicy pensions that they were counting on to fund their golden years go up in flames in the biggest financial disaster in U.S. history? When Bloomberg published an editorial entitled “Pension Crisis Too Big for Markets to Ignore“, it simply confirmed what a lot of people already knew to be true.  Pension funds all over America are woefully underfunded, and they have been pouring mind boggling amounts of money into very risky investments such as Internet stocks and commercial mortgages.  Just like with subprime mortgages in 2008, this is a crisis that everyone can see coming well in advance, and yet nothing is being done about it.

On a day to day basis, Americans generally don’t think very much about pensions.  Most of those that have been promised pensions simply have faith that they will be there when they need them.

Unfortunately, the truth is that pension plans all over the country are severely underfunded, and this has already resulted in local fiascos such as the one that we just witnessed in Dallas.

But what happened in Dallas is just the very small tip of a very large iceberg.  According to Bloomberg, unfunded pension obligations on a national basis “have risen to $1.9 trillion from $292 billion since 2007″…

As was the case with the subprime crisis, the writing appears to be on the wall. And yet calamity has yet to strike. How so? Call it the triumvirate of conspirators – the actuaries, accountants and their accomplices in office. Throw in the law of big numbers, very big numbers, and you get to a disaster in a seemingly permanent state of making. Unfunded pension obligations have risen to $1.9 trillion from $292 billion since 2007.

And of course that $1.9 trillion number is not actually the real number.

So why not just flip the switch and require truth and honesty in public pension math? Too many cities and potentially states would buckle under the weight of more realistic assumed rates of return. By some estimates, unfunded liabilities would triple to upwards of $6 trillion if the prevailing yields on Treasuries were used. That would translate into much steeper funding requirements at a time when budgets are already severely constrained. Pockets of the country would face essential public service budgets being slashed to dangerous levels.

So where are all of these pensions eventually going to come up with 6 trillion dollars?

That is a very good question.

Ultimately, even if financial conditions stay as stable as they are right now, a whole lot of people are not going to get the money that they were promised.

But things will get really “interesting” if we see a major downturn in the financial markets.  According to Dave Kranzler, if the stock market were to fall by 10 percent or more and stay there for a number of months, that “would cause every single public pension fund to blow up”.  And Kranzler is also deeply concerned about the tremendous amount of exposure that these pension funds have to commercial mortgages…

Circling back to the mall/REIT ticking time-bomb, while the Fed can keep the stock market propped up as means of preventing an immediate nuclear melt-down in U.S. pensions (all of which are substantially “maxed-out” in their mandated equities allocation), the collapse of commercial mortgage-back securities (CMBS) will have the affect of launching a nuclear sub-missile directly into the side of the U.S. financial system.

The commercial mortgage market is about $3 trillion, of which about $1 trillion has been packaged into asset-backed securities and stuffed into yield-starved pension funds. Without a doubt, the same degree of fraud of has been used to concoct the various tranches in these CMBS trusts that was employed during the mid-2000’s mortgage/housing bubble, with full cooperation of the ratings agencies then and now. Just like in 2008, with the derivatives that have been layered into the mix, the embedded leverage in the commercial mortgage/CMBS/REIT model is the financial equivalent of the Fukushima nuclear power plant collapse.

I have previously talked about the ongoing retail apocalypse in the United States which threatens to make so many of these commercial mortgage securities go bad.  It is being projected that somewhere around 3,500 stores will close in the months ahead, and this is going to absolutely devastate mall owners.  In turn, it is inevitable that a lot of their debts will start to go bad, and pension funds will be hit extremely hard by this.

But the coming stock market crash is going to hit pension funds even harder.  Stocks are ridiculously overvalued right now, and if they simply return to “normal valuations”, pension funds are going to lose trillions of dollars.

We are talking about a financial tsunami that will be absolutely unprecedented in our history, and yet investors continue to act like the party can last forever.  In fact, we just learned that margin debt on Wall Street has just hit another brand new record high…

The latest data from the New York Stock Exchange show margin debt, or cash borrowed to buy shares, hit a record $528.2 billion in February, up from its prior high of $513.3 billion in January.

Prior periods when margin debt hit records occurred around stock market peaks, including 2000 when the dot-com stock boom went bust, and 2007 when stocks began to crater amid early signs of trouble in the housing market ahead of the 2008 financial crisis.

We are perfectly primed for the greatest financial disaster in American history, and yet very few people are sounding the alarm.

This massive financial bubble is a ticking time bomb, and when it finally goes off it is going to wipe out virtually every pension fund in the United States.

This article was written by Michael Snyder and originally published at the Economic Crisis blog.