It Has Been Happening Right Before Our Eyes: 102 Million Americans Absent From Workforce 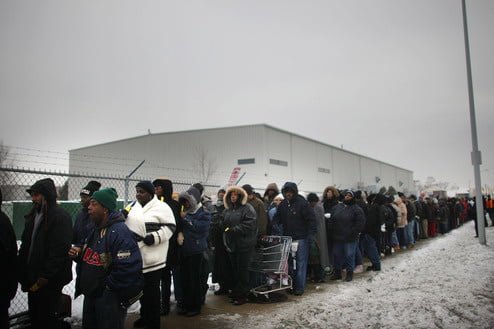 Editor’s Comment: The creepiest part is that this is all really happening – and has been ongoing. It has been going on right under our noses, and hardly anyone has pointed out how badly everyone is being hit  by all this. The widespread effect that is going on here has been all but ignored. The jobless and aimless line up for the dole, and the cheerleading sessions for the status quo go on and on…

Is anyone paying attention here? Society is dangerously unemployed, and not in control of his own future. Those dependent upon government cannot survive independently at all, and are being dangerously accustomed to the conditions that come with handouts. Where does a future of this kind really lead? And what the hell is coming?

This is exactly what we have been expecting to happen.  On Friday, the Bureau of Labor Statistics announced that the U.S. economy only added 38,000 jobs in May.  This was way below the 158,000 jobs that analysts were projecting, and it is also way below what is needed just to keep up with population growth.  In addition, the number of jobs created in April was revised down by 37,000 and the number of jobs created in March was revised down by 22,000.  This was the worst jobs report in almost six years, and the consensus on Wall Street is that it was an unmitigated disaster.

The funny thing is that the Obama administration says that the unemployment rate actually went down last month.  Almost every month since Obama has been in the White House, large numbers of Americans that have been unemployed for a very long time are shifted from the “unemployment” category to the “not in the labor force” category.  This has resulted in a steadily falling “unemployment rate” even though the percentage of the population that is actually working has not changed very much at all since the depths of the last recession.

The Bureau of Labor Statistics claims that the number of Americans “not in the labor force” increased by 664,000 from April to May.  If you believe that, I have a giant bridge on the west coast that I would like to sell you.  The labor force participation rate is now down to 62.6, and it is hovering just above a 38 year low.

This is not a game.

So far in 2016, three members of my own extended family have lost their jobs.

According to Challenger, Gray & Christmas, layoffs at major firms are running 24 percent higher up to this point in 2016 than they were during the same time period in 2015.

It was only a matter of time before those layoffs started showing up in the official employment numbers, and I fully expect that this trend will accelerate in the months ahead.

-Since Barack Obama entered the White House, 14,179,000 Americans have “left the labor force” according to the Bureau of Labor Statistics.

-We just learned that U.S. factory orders have declined once again.  This marks the 18th month in a row that this has taken place, and we have never seen such an extended decline outside of a major recession.

-JPMorgan’s “recession indicators” have just soared to the highest level that we have seen since the last recession.

Needless to say, the financial community is pretty horrified by all of this news.  They were expecting a much better jobs report, and many of them are not hiding their disappointment.  Here is one example from the Wall Street Journal…

“This was an unqualified dud of a jobs report,” said Curt Long, chief economist at the National Association of Federal Credit Unions, noting “the unemployment rate fell, but for the wrong reason as labor force participation declined for the second consecutive month.”

And here is another example that comes from David Donabedian, the chief investment officer at Atlantic Trust Wealth Management…

“We can’t find a positive nugget in today’s job report. If we were looking for signs of strength in this report, there is nothing to hang onto here.”

But of course the mainstream media is doing their best to put a positive spin on these numbers.  For instance, CNN just published a laughable article entitled “America’s economy is stronger than weak jobs report“.

The White House doesn’t get “too disappointed” over the number of unemployed and underemployed Americans.

But of course the truth is that it is a really big deal.  We just received major confirmation that the U.S. economy has slipped into recession mode.

For months, I have been writing about how virtually every other indicator has been screaming that a new economic crisis had already begun.

But the employment numbers had remained fairly decent up until now.  Employment is typically considered to be a “lagging indicator”, which means that it isn’t one of the first places we would expect to see signs of a recession show up.  However, it is inevitable that the official unemployment numbers will reflect an economic downturn eventually, and that is what we are starting to see now.

What this means is that you probably have even less time to get prepared for what is ahead than you may have originally thought.

The U.S. economy has already entered the early chapters of the next great economic crisis, and most of the population is going to be caught totally off guard and will suffer tremendously.

If our leaders had made better decisions since the last crisis, things could have turned out differently.  But instead, they continued to conduct business as usual, and now we will reap what they have sown.