In The Aftermath Of A Tragedy, Heroes Emerge. Here Are Two Of Their Stories 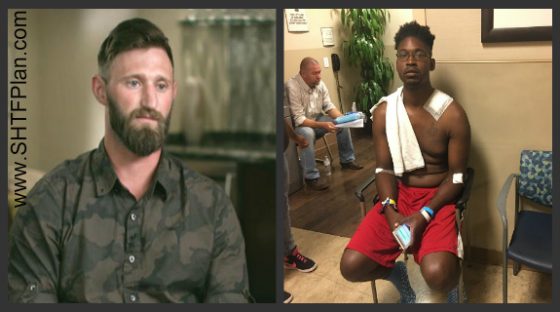 Winston Taylor (left) and Jonathan Smith (right) are only two of the heroes to come out of the horrific massacre in Las Vegas.

The mass shooting in Las Vegas, Nevada was an atrocity unprecedented. But in the aftermath of this tragedy, some heroes have emerged.

One such hero is a United States Marine vet who helped rescue more than a dozen people during the shooting attack Sunday with quick thinking he credited to his military training. Taylor Winston, 29, stole a utility pickup truck he found on the concert grounds and transported several injured people to the hospital before ambulances could arrive on the scene, The Orange County Register reported.

Winston at the concert with his girlfriend and friends when a shooter began firing a gun into the crowd from his hotel room on the 32nd floor of the Mandalay Bay Resort and Casino, he told CBS News. “The shots got louder and louder, closer to us and saw people getting hit, it was like we could be hit at any second,” Winston said. “It was a mini war zone but we couldn’t fight back.” The vet said they ran for cover and hopped a fence to get to safety. Once he landed on the other side, he said he reportedly saw a bunch of white trucks. “I tested my luck to see if any of them had keys in it, first one we tried opening had keys sitting right there,” he said. “I started looking for people to take to the hospital. There was just too many and it was overwhelming how much blood was everywhere.”

Winston and his friend reportedly made two trips to Desert Springs Hospital Medical Center, squeezing “probably 20 to 30” victims in the back seat and in the bed of the truck, CBS News said. When they returned to the shooting scene for a third pick up, he said it looked like emergency responders had it under control, The Orange County Register reported.

But he isn’t the only hero.

Jonathan Smith is likely to spend the rest of his life with a bullet lodged in the left side of his neck, a never-ending reminder of America’s deadliest mass shooting in modern U.S. history. Smith is a 30-year-old copy machine repairman and he was shot Sunday night while trying to help save people after a gunman opened fire on the crowd at the Route 91 Harvest Country Music Festival in Las Vegas. He knows he’s one of the lucky ones to be able to walk out of the hospital, even with his severe injuries.

His family was Smith’s top concern when the shooting began. He had driven to Las Vegas from Orange County, California, on Thursday to celebrate the 43rd birthday of his brother, Louis Rust, a big country music fan who had attended the festival in the past. They spent the weekend enjoying the music and had scored seats close to the stage for Jason Aldean’s prime-time performance Sunday night. Smith was focused on saving his nieces from the gunfire. He says he turned back toward the stage to look for them and saw people hunched behind a sheriff patrol car at the northwest edge of the concert lawn. Others were so frightened they didn’t know what to do. He kept shouting, “Active shooter, active shooter, let’s go! We have to run.”

“I got a few people out of there,” Smith said. “You could hear the shots. It sounded like it was coming from all over Las Vegas Boulevard.” A few younger girls weren’t fully hidden from the gunfire. Smith stood up and moved toward them to urge them to get on the ground. That’s when a bullet struck him in the neck.

“I couldn’t feel anything in my neck. There was a warm sensation in my arm,” said Smith from the Sunrise Hospital lobby Monday afternoon as he was waiting for his final discharge. He has a fractured collarbone, a cracked rib, and a bruised lung, and a GoFundMe account has been set up to assist him with his medical costs. The doctors are leaving the bullet in his neck for now. They worry moving it might cause more damage.

“I might have to live with this bullet for the rest of my life,” Smith said, grimacing from the pain. A large white bandage covers the bullet hole.

These are only two stories of heroic actions during the massacre that ended the lives of 59 people and wounded over 500 more. Both of these men deserve the title, but there are many more heroes out there who saved lives during such a horrific event.