If the Road Ahead Is Dim, Prepare for Survival in a Broken America: “Hope For the Best Outcome” 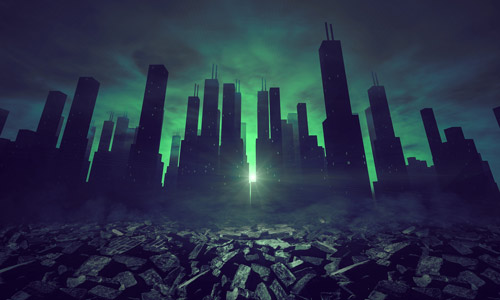 A pessimistic forecast on the delivery of the promises of the next administration would indicate that, as many have predicted, a financial collapse will be dumped in the lap of Donald Trump. On the other hand, it could be the start of an even bigger bubble.

Like any team, they have a book of plays, and there is more than one possible future.

But the election of Trump has sparked a note of economic optimism, and the same feeling in Kansas and the rest of the heartland that a wicked witch has been laid asunder, and that the country has dodged a bullet.

So, a crash and bust has been written up and potentially scheduled for a pivotal time during the next administration; however, they could also kick the can down the road. And why not?

Business is back, American is the theme, and the bankers have plenty of game to work on their home turf. And on their terms. The election delivered to Donald Trump, ultimately in electoral college terms, because the rust belt states defected from the Democratic ranks. And they want to believe again.

Can they really bring the jobs back? It appears that the powers that be are pitching a revival. One gets the sense that they are even running for office, or at least a mandate from the people.

Jamie Dimon, head of JP Morgan, says that he would have acted out of a moral sense of duty alone, to say nothing of his profit motive, in the new scheme. As Bloomberg notes:

We’re here in Detroit to look at what JPMorgan Chase has done with a five-year commitment to invest $100 million in the city. Why is an initiative like this good business for you as well as for Detroit?

I would do it for moral reasons alone. But it is good business. We are the largest bank in Detroit. The National Bank of Detroit was started by General Motors in 1933 in the Depression when most banks were closing. That bank merged with First Chicago, Bank One, and then with JPMorgan Chase. So here we are, the largest bank in consumers, small business, middle market. We bank all the major institutions, the hospitals, the major companies here, and the government. It’s an important town for us. It’s probably one of the only towns in America that really did not have a renaissance in the 1980s, 1990s, and 2000s. So this has been a train wreck we all knew was coming for about 20 years.

If we help the city, it helps our business. Remember, we bank here. We need a healthy, vibrant bank. We can do it elsewhere, too, and help communities where we are. It’s good for society and obviously very good for business.

As recently as September, you thought it would be difficult for people on Wall Street to get into the new administration. Now, Donald Trump has tapped several Wall Street figures. What do you think they’re going to bring that’s different?

[…] I think it’s a mistake for the American public to constantly be told that if you work for an oil company or you work for a bank, that automatically makes you bad. I think a lot of these people are very qualified people who are patriots. They’re going to want to help the country. They’re not going to try to help their former company. These are people with deep knowledge that will hopefully do a great job.

There is every sense that JP Morgan, Goldman Sachs and the other mega banks, control the entire flow of the energy of a territory. They process business and financial transactions of the society – from government institutions, down to business and personal finance.

2008 revealed that bankster class to be a vampire squid parasite on the population, yet in 2017 they are more in power than ever before. Homes get foreclosed perhaps millions of times for every ranking banker who faces jail time for fraudulent activities. People lost their jobs, and were forced into poverty, and government assistance. The federal reserve stimulus plan fueled a rise and fall under Obama’s two terms, and a squeezing of the masses to extract rich rewards for the few at the top.

And now they are orchestrating the next boom or bust, depending upon the road that they alone determine. Despite this, we can only hope for the best outcome.

Detroit could use a genuine revival, and so could the rest of the country, from the rust belt on out. But it may not come.

Regardless of the cynical politics, it is an area in embarrassing decline and there is much good that can be done there. It has been a long winter for the poor in that area, dealing with the realities of overseas jobs and the de-industrialization of American prosperity – and crucially, the start of the era of credit cards and personal debt. For a leg up today, Americans entered into an alternate reality

Now, with the biggest mountain of debt yet to hit taxpayers, and individual households alike, there is an opportunity to sell a bigger piece of our future for another hit into often hollow, ersatz prosperity – when it comes with the decline of society, it is bitter, and crumbles apart.

Americans in 2016 voted against more of the same bull––– and opted into anything else. But that is no promise that the years to come will be good ones.

If they are, they may come with the additional hazard of even greater levels of insurmountable debt, and financial servitude.

Until or if the infrastructure is repaired, and prosperity re-invented, many areas of the country remain traps of poverty – and make for extremely dangerous territory during a collapse, or perhaps even after dark.

As things stand, a collapse may well coming in 2017 or thereafter, the system is poised for crisis, and the conditions set for a widespread disintegration. If that is averted, all the better, but if it is merely postponed, then be ready for all conditions emergency, regardless of if it is just ahead, or later down the road.

Here’s a note on how to prepare for the potential highs and lows of the next administration and beyond – with the knowledge that nobody can be sure if the next era will be function, or completely disastrous.

This country is hanging one thread away from total chaos – all it takes is the right crisis.

• Stay out of debt, or minimize debt. Pay down strategically. Any asset that has a lien and debt to pay (house, car, etc.) will be seized in the event of a crisis where you can no longer pay. Ideally, own something that you can rely upon and fall back on. Bills and obligations are not sustainable and could result in seizure, and interdiction via authorities.

• Use cash while you can; but prepare for ways to conduct transactions online while maintaining privacy.

• Buffer yourself from dependence on the system, the supply of groceries, water and utilities.

• Prepare for the collapse of urban areas, and the dependence of your neighbors on the functionality of the system.

• Consider your personal assets vs. liabilities, especially if a crisis emerged. What if cash was outlawed, or became worthless? What if the grid shuts down, or your cards and identification is lost or inactivated? Are you liquid in gold, silver, barter, bitcoin or other means of exchange? A leveraged, and diverse ability to use any available system could keep you from being stranded or exiled from society.

• Ready the basics of preparedness and rugged survivalism (food, medicine, supplies, shelter, transportation, weapons, fuel/energy, skills/experience, etc.) , with a sober assessment of the workings of the system that we are all entangled in

• Be prepared to engage the system, keep a low profile and stay out of trouble and off their radar

• But also prepare to withdraw from the system, avoid detection and live more or less self-sustainability. Depending upon your level of preparedness, complete independence may be more dangerous due to inadequate skills, knowledge and advanced accommodations.

Also, in this article, Sargent Survival gives some very explicit details concerning survival, privacy and interaction with the system during the next era – during which you could be identified for removal to a detention facility based on your status in a database; a detailed account of all your activities is being constantly profiled; law enforcement and other officials will use it to determine your financial and legal status; even your fridge and stove are spying on you, and could implicate you in criminal activity or code violations.

A Storm is Coming: Preppers Must Stay Vigilant in 2017