If Technology Fails, Just How Long Are Your Long Range Plans?

The following article has been generously contributed by Tom Chatham, author of the newly released book The American Dream Lost – Economic Survival Strategy for a New Paradigm. 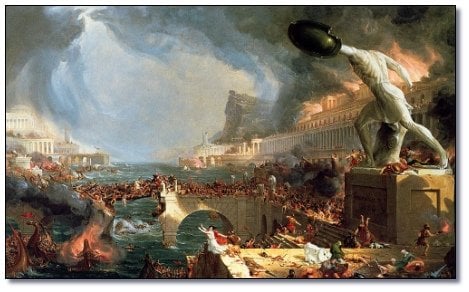 The Library of Alexandria in Egypt is believed to have housed technology and historical texts dating back thousands of years. It was partially or completely burned on at least five occasions, including once by Julius Caesar circa 48 B.C. and finally by Muslim conquest in 642 A.D. Most of the knowledge it held was lost to mankind forever.

When the Roman Empire died , the technology and living standard that had spread around Europe slowly died with them. Things such as paved roads, sanitation and aqua ducts to carry fresh water to cities were forgotten over the generations and men reverted to simpler forms of technology. This reversion led to the dark ages. After many generations the people relearned some of the forgotten technologies and advanced once again. There was no global cataclysm that brought about this reversion , it just happened because the knowledge of how the technology worked decayed along with the Romans and the average man did not understand the significance of these technologies. Eventually , future generations were ignorant of these technologies that once existed.

Today we are blessed with truly unbelievable technology that holds many benefits for man. Almost everyone has a cell phone or computer , but do any of those people actually know how these things work? A lot of people can build a wood stove from scratch but how many can build a microwave oven or know exactly how a gas oven works? Our technology is dependent on simple machines that create parts for other more complex machines that create parts for machines that can make a computer chip. With each layer of technology , fewer and fewer people actually know how to recreate it from scratch. In our society it may not be necessary to know how to fix your own car or how a phone works because there is always someone else that knows the secrets of these devices.  But , what if these people that hold the keys to our knowledge suddenly ceased to exist or if the technology somehow broke and they could not fix it?

It is not unthinkable that a natural or manmade event could create a situation where our technology is damaged or destroyed beyond our ability to repair or recreate it from scratch. If all of our computer chips were destroyed along with the complex machines that make them, how long would it take us to recreate that technology and under what conditions would we be working?  How many people in the world have the knowledge to do that? Any event that would destroy our technology would create chaos around the world. It’s not unreasonable to think that this chaos would prevent those with the knowledge from reconstituting our technology base in a timely manner. The longer it remains off line , the harder it will be to recreate it. This time lag could be months , years or generations. As time passes it is less likely that information will be passed on to the next generation to be reconstructed. This is how a society can devolve into a dark age. If information is not passed on it will eventually be lost to the ages.

On a local level , if all of your conveniences were lost , how long would it take you to recreate them from scratch? Could you even do it? Even if you can make fuel for your vehicle , can you make the lubricants to keep it going or the bearings for the wheels to keep them turning? If an event took away most of our machines many would be able to rig up new machines from the parts to use for a while but what happens when these parts wear out?  Even if you had a block of copper , and knew how to melt it , do you know how to turn it into a long piece of wire? A simple piece of wire seems pretty simple until you think about it that way.

When we are thrown back on our own resources , we are dependent on the knowledge we have to solve problems. If you needed to reestablish communications with another town with technology that you had to build , what would you do? The simplest form of communication over a distance is light or hand signals but what if you could not see the next town on a direct line of sight? The simplest device you could build in electrical terms is a telegraph set. Could you build the keys , wire and batteries from scratch? Could you build a wagon from scratch to transport goods? The loss of technology would cause a regression to what we are capable of building ourselves.

It is a feeling in the prepper community that you are never finished preparing for disaster. The possible collapse of our technology is the reason for this. With the vast amount of knowledge available to us it is almost impossible for any one person to know it all. This is why it is important to have a good reference library that you can refer to in times of need. I have a set of reference books that tell me how to build a charcoal foundry and from there to produce every part of several  basic machining tools minus the electric motor. If I had to ,  I have the ability to build a small machine shop , powered by alternate means , to produce parts to build other machines. Even if I never build these things , the knowledge is there to pass down to the next generation so it is not forgotten. This could be the difference between living in a new dark age or just having a reduced standard of living for a few generations.  I study obsolete technology because it is the basis of all of the technology we have today.  It provides me with the basics to start the rebuilding process should it ever be necessary. Many have a plan to survive food disruptions and civil breakdown but how far out do those plans go?  At some point , things will stabilize and the rebuilding will begin. Anyone that feels the need to prepare must also feel that they have a duty to the future to insure the continuation of our society. Any skills you have that can be passed on should be and for those you don’t have you should at least have books to pass on that knowledge. Our society cannot go on without a long range plan to at least provide  the basics of human needs.  Future generations depend on the information that we hand down to them, and lately we haven’t been doing a very good job of it.

Tom Chatham is the author of the newly released book The American Dream Lost – Economic Survival Strategy for a New Paradigm.

Prepping for the Financially Challenged: Basic Survival Strategies For Apartments and Confined Spaces