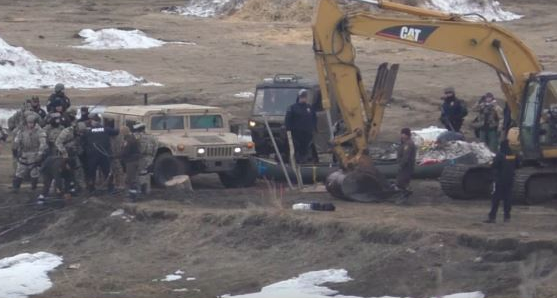 This article was written Claire Bernish and originally published at The Free Thought Project.

Editor’s Comment: The powers that be are increasingly using military troops against the American people, and shutting down legitimate protests by force. Whether the issue is one you agree with or not, a militarized opposition to assembly is taking place.

Those standing against the Dakota Pipeline, including tribal members, having been speaking out against the contamination of the water supplies for tens of millions of people, while they have come to represent a new front in corporate-crony crackdowns on American dissent.

Heavily militarized police and National Guard forces moved in to raid camps at Standing Rock on Thursday morning, with hundreds of riot gear-clad officers marching in formation to clear camps of water protectors, journalists, and anyone firmly entrenched to oppose the Dakota Access Pipeline.

Ominously poised on Highway 1806, officers waited in formation with dozens of heavily armored vehicles for over an hour before eventually descending into the remnants of the largest Standing Rock camp, Oceti Sakowin, in recent days renamed Oceti Oyate.

Prayerful song eerily served as a backdrop for what constituted a military raid of land unceded to the U.S. government in treaties from 1851 and 1868.

In a livestream taken a slight distance from camp, Unicorn Riot explained a Bearcat armored vehicle on scene was likely the same from which an officer in a gun turret fired an alleged explosive device at Sophia Wilansky, ripping her arm to shreds on November 20, during a police offensive.

Just before noon local time — and under the watchful eye of snipers — officers in helmets carrying temporary zip-tie restraints could be seen roaming the camp, searching for stragglers to arrest under the premise water protectors are trespassing on land federally managed by the U.S. Army Corps of Engineers.

With assault rifles and guns in hand — and helicopters occasionally just ten feet in the air above — militarized cops perched outside tipi and tent entrances, searching for violators of the eviction order. As the search continued, live video showed several water protectors joining hands in prayer before near certain arrest.

At 12:30 local time, dozens of officers approached a tiny group of water protectors — one of whom raised a sacred pipe in prayer as they closed in to make arrests. Reports more than 20 military veterans had been arrested were unconfirmed at the time this article was published, but images posted to social media did show police arresting an elderly Native grandmother and searching the pockets of her coat.

Grandmother arrested. Please don’t strip her & number her & put her in a dog kennel like you did the rest #NoDAPL pic.twitter.com/4bBiQNNSYY

Despite nearly a year of proving themselves unarmed, water protectors became the subject of utterly unfounded law enforcement rumors that an armed group of rebels could be hiding out in an unknown location within the camps.

UPDATE: At least 23 Natives have been arrested today at #StandingRock as oil police sweep through camp #NoDAPL pic.twitter.com/DRHjmiRaWd

Thus, MRAPs (Mine-Resistant Ambush Protected vehicles), Bearcats, and Hum-vees zig-zagged through the a complex of still-intact structures that had served as home for the protectors for months, making sure to evacuate everyone before razing the property. National Guard and police were still searching through the property as of 1 p.m. local, and appeared to be secondarily kettling water protectors inside the camp, where arrests would be easier to effect en masse.

sooo how many highly militarized brutes does it take to untie a line? your tax dollars at work….#StandingRock – pic.twitter.com/l7rRSL9sRW

Sweeps of the territory will take hours, as officers move from structure to structure with assault rifles drawn — permission to use live fire was reportedly given months ago — in a methodical but deliberate process.

Just as law enforcement appeared to have gained a foothold of control on the camp, two of a handful of livestreams were suddenly cut. A third livestreamer, Hunter Nolan, recorded as authorities tried to determine how to extricate a lone water protector perched on the roof of a house in defiance of the eviction — whom Nolan described as ‘the last man in camp.’

UPDATE: At approximately 3 p.m., livestreamer Johnny Dangers reported in a live video Bureau of Indian Affairs police had begun to raid a second camp, Rosebud, in much the same manner as with Oceti Oyate camp.

This article was written Claire Bernish and originally published at The Free Thought Project.