Guns in Violin Case, Weapons Cache in D.C. Before Inauguration: “Is Someone Unleashing Chaos?” 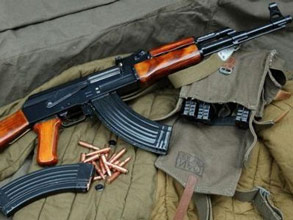 Editor’s Comment: Is this more evidence of foul play afoot in Washington, D.C. ahead of the inauguration and one of the most contentious transfers of power in American history? There is simply no way to know, but with so many protests planned, so many in the establishment opposed to the Trump presidency and so much to gain from civil unrest, there is every reasons to question whether or not security has been properly arranged at the capital, and whether or not someone is preparing to unleash total chaos from the inception of the next administration.

Although the inauguration will hopefully go off smoothly, and without a hitch, President-elect Trump has more enemies than he can count before he even takes office. There are enough bizarre and unexplained circumstances already unfolding to start a new chapter in the JFK assassination investigation – why would the national security structure allow such unstable conditions, unless they were hoping to profit from a beleaguered administration and an angry, outraged people.

Some lady out for a walk happened upon a couple of guns stashed in a violin case in the woods near the C&O Canal along the Potomac River in Washington, DC.

After the police were called in, more weapons caches were found, including long guns, pistols, and ammunition in pails and garbage bags tucked away in an area of the woods hikers aren’t known to frequent.

“At this point, we don’t know how they got there, why they’re here or when they got here,” police spokeswoman Sgt. Anna Rose told ABC News.

Could be nothing, but it seems like another red flag.

What is clear at this point is that inauguration day is only four days away and people are amped up like they think it’s going to be the film The Purge.

The radical left is threatening riots like this nation hasn’t seen in modern times. Organized protests to “shut it down!” will be held not just around the city or the country but the globe, with anti-Trump protesters holding press conferences to say they aren’t supportive of a peaceful transition of power.

In an unprecedented move, one of the top inauguration day security planners and head of the DC National Guard, was asked to step down immediately one minute after Trump is sworn in and right in the middle of the ceremony. Has that ever happened before? The Major General himself said it was “highly unusual” and he wasn’t given a reason for his sudden departure.

No matter what goes down, it is already shaping up to be one of the most bizarre transitions of power probably in the history of the nation.

Maybe these weapons caches found in DC are nothing, but when you throw it on the pile of red flags fluttering around this thing, it’s hard not to wonder if something bad is about to go down on Friday.