This Is The Collapse: Discount Grocery Store Serving Poor Cleaned Out: “Bargain-Hungry Shoppers Emptied the Shelves” 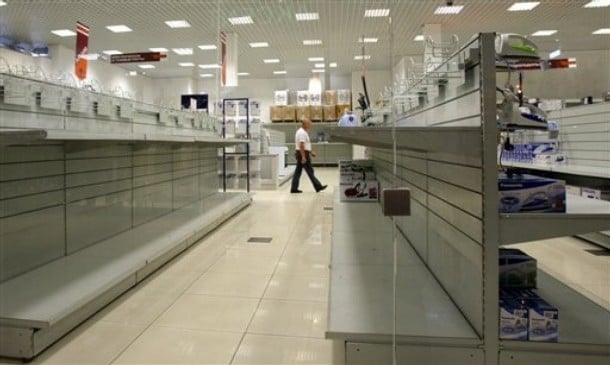 This article was written by Michaela Whitton and originally published at The Anti-Media.org.

Editor’s Comment: This story isn’t quite what you might think at first if you just scanned over it, but it still demonstrates an alarming trend:  namely, just how desperate so many have become.

Basically, it amounts to riot-prone and often struggling people fighting over bargain-basement junk food after it was put on sale. But what does this level of reaction say about society and the level of economic crisis the world has reached? Basically, that almost anything can make things come unhinged.

If people are reacting this strongly over undercutting food prices, it suggests how much food insecurity exists, and how difficult it has become for most to pay the bills. Food banks have been overwhelmed nearly everywhere. In fact, this grocery chain found the problem to be big enough to create this cheap food marketing niche – which will now need to rethink its business strategy. What happens when the food isn’t just cheap, but unavailable? Multiplied against the whole environment of economic stress, there is every reason to think things are practically just falling apart.

London’s new EasyFoodstore has been forced to review its trading rules after it had to close temporarily when bargain-hungry shoppers emptied the shelves. The mega-discount food store is the latest venture of EasyJet entrepreneur, Stelios Haji-Ioannou.

The millionaire businessman was inspired by the idea after seeing the widespread use of food banks in Britain. “This is another way the Easy brand can serve the less well-off,” the budget airline owner said.

Easy on the wallet

With a weekly shop for a family of four costing just £15.75, it’s no surprise the store rapidly became a victim of its own success. After a promotional offer charging just 25p for everyday food items generated so much publicity, hundreds of bargain-hunters cleared the shelves and the store had no choice but to close until it was able to re-stock.

The recently opened food shop in Park Royal, north-west London, carries a basic range of 76 cheap and cheerful items including pizza, tea, coffee and tinned goods. It has been quickly forced to bring in a 10 item purchasing limit to deter its competition from stockpiling products.

In her brilliant opinion piece for the Guardian, Joanna Blythman says the EasyFoodstore is in a different league from the “no frills” food shopping that she claims is now such a familiar feature of the British retail scene. She adds that poverty is a money problem, not a food problem, and won’t be cured by artificially “cheap,” nutritionally impoverished, lowest-common-denominator food.

“Surely no society on earth can ultimately afford food this cheap? If we factor in the hidden costs to society, from grave public health issues to climate change, it most certainly doesn’t constitute a bargain,” she said.

The predictions are that EasyFoodstore products are to rise from 25p to 50p after February. However, with Foodbank use in austerity Britain at record levels, is it any wonder that rationing is required?